How Are the Atmosphere, Oceans, and Cryosphere Coupled?

THE SURFACE OF THE OCEANS marks the boundary between Earth’s major systems — oceans and atmosphere. Both systems move mass and energy laterally and vertically, primarily in response to variations in density and to the equator-to-pole energy gradient. Deep-flowing abyssal waters are generally cooler and denser than surface waters, but they rise in some places and sink in others. The global, three-dimensional flow of energy between the ocean, atmosphere, and cryosphere is a fundamental determinant of global climate.

How and Why Do Temperature, Salinity, and Density of Seawater Vary?

The oceans vary in temperature and salinity, and therefore also in density, laterally across the surface and from shallower to greater depths. The figure below summarizes these variations from equator to pole, and between upper and lower levels of the ocean. Begin with the text above the figure, which describes the atmospheric processes imposed on the underlying sea, and then read how the sea responds to these changes.

1. Atmospheric motions result from the energy gained by insolation into the lower atmosphere, and by radiative cooling at higher levels. Warm, rising air is located over the seasonally migrating Intertropical Convergence Zone (ITCZ), centered at the equator. As the warm air rises in these regions it cools and produces condensation, clouds, and precipitation.

2. In the subtropics, air is dominantly sinking in the descending limb of the Hadley cell. This forms semipermanent subtropical anticyclones, whose high pressure causes warming and limits the cloudiness and precipitation.

3. The poleward edge of the mid-latitudes is another region where rising air is common. Upward atmospheric motions are caused by differences in density between cool polar and warm subtropical air masses, leading to low pressure and an increase in clouds and frontal precipitation. These latitudes receive less insolation than subtropical ones, which, together with the higher albedo of the clouds, reduces evaporation.

4. Near the poles, descending air, combined with the limited insolation, keeps polar regions cold and relatively dry. This in turn limits the amount of evaporation and causes a noticeable absence of precipitation.

5. Clouds in equatorial and tropical regions allow more precipitation than local evaporation, causing a decrease in salinities near the surface. The warmest, less saline waters have low density, forcing waters of intermediate density beneath them immediately around the equator.

6. Unlike the atmospheric system, the oceanic system is heated from above. Insolation is absorbed in the upper layers of the oceans but does not penetrate far beyond a depth of at most 100 m. This upper zone is warmer and less dense, and is known as the photic zone. Deep ocean waters below these depths are consistently at between –1°C and 4°C throughout the world’s oceans. Water stays in its liquid form at these subzero temperatures because the salinity of the water decreases the freezing temperature (like antifreeze in your car) and because of the pressure exerted by the great depths of overlying ocean waters.

7. Warmer, less saline and less dense waters “sitting” on top of cooler, more dense waters is an extremely stable arrangement which discourages mixing between the two sets of water. The transition from the photic zone to deep ocean waters is usually marked by a very rapid change in density and in temperatures — a boundary called the thermocline. This figure represents the thermocline as the boundary between lighter blue (warmer) waters and darker blue (colder) waters.

8. Much insolation reaches the ocean surface in the subtropics, in part due to small zenith angles and a general absence of clouds. The combination of high evaporation and low precipitation leads to these subtropical waters becoming more saline. A marked vertical gradient in water density is a pycnocline. The pycnocline commonly coincides with the thermocline, so it can be called a thermopycnocline.

9. In the midlatitudes, lower insolation and the higher albedo of the clouds reduces evaporation, which, in combination with increased frontal precipitation, leads to a freshening of surface waters.

11. As cold and saline waters near the pole sink deep into the oceans, they begin to flow back toward the equator as abyssal waters. In contrast, the flow of surface waters (i.e., those in the photic zone) is generally toward the poles. Together, the poleward-flowing surface waters and equator-flowing deep waters form a circuit of flowing water that acts to “overturn” waters of the ocean.

What Is the Thermohaline Conveyor?

The flow of deep water and surface water combine to form a global oceanic circulation system, commonly called the thermohaline conveyor because it is driven by differences in water temperatures and salinities. This circulation system is among the most important on Earth. What is it, where is it, and how does it operate? The best way to understand it is to follow water through the system, beginning in the Caribbean Sea.

1. Ocean waters in the tropical Atlantic Ocean and Caribbean Sea, along with those in the Gulf of Mexico, heat up before entering the subtropics where their salinit increases through evaporation. Cold waters from the Greenland Sea (1) and the Labrador Sea (2) cool these salty waters in the North Atlantic around Iceland and the Maritime Provinces of Canada, making them sufficiently dense to descend deep into the Atlantic as the North Atlantic Deep Waters (NADW).

2. At depth, the NADW flow south through the Atlantic Ocean, threading their way between Africa and the Americas, crossing the equator, and turning east when they encounter Antarctica.

3. Extensive ice shelves extending from Antarctica over the adjacent Weddell Sea (3) and Ross Sea (4) exclude salt water during their formation, causing the nearby waters to be very cold and saline. These Antarctic Bottom Waters (AABW) sink to join the NADW in moving eastward. Some deep waters branch northward into the Indian Ocean basin, while the remainder continues into the Pacific basin, mixing along the way and becoming slightly warmer and less dense.

4. Once in the Pacific, the deep waters turn north, again crossing the equator. The northward-moving deep waters are ultimately forced to rise, or upwell, at the Pacific basin’s northern limit, south of Alaska (6). Surface conditions move these waters back south, into the tropical and equatorial regions, ultimately returning to the Atlantic south of Africa and completing the loop to the Gulf Stream.

5. Neither the Indian nor Pacific Ocean basins extend sufficiently poleward to generate their own northern deep ocean waters, but deep waters upwell in the Indian Ocean (5) and join the surface flow around Africa.

6. There is concern about how climate change could impact the operation of the thermohaline conveyor. To evaluate this issue, we can consider how climate change could impact global temperatures, and how these in turn would affect the amounts, distribution, and movement of water due to changes in evaporation, rainfall, and runoff. These factors affect temperatures, salinity, and density of water, which are critical in driving the thermohaline conveyor. 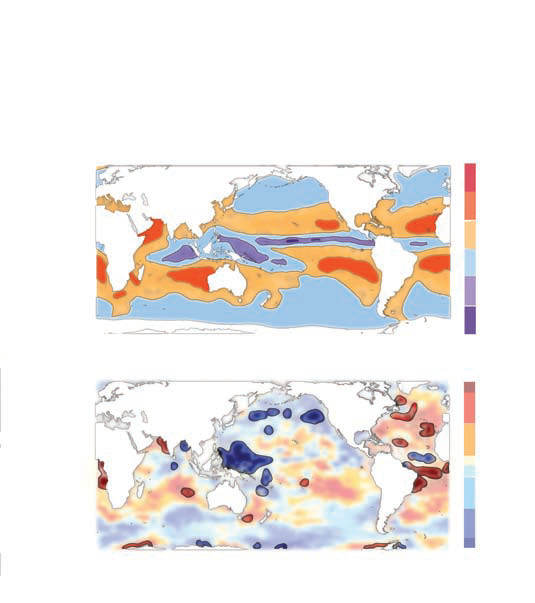 8. This lower map shows estimates of the change in salinity between 1975 and 1999, during a time when the Earth was warming. Areas in red became more saline and those in blue became less saline. Increased salinity in the subtropics implies reduced rainfall and higher evaporation in response to the increase in temperatures. Lower salinity in warm pools and the mid-latitudes suggests an opposing trend. The trends in polar regions are not consistent. Overall, however, changes in salinity and temperature may have severe ramifications for global climate.

9. This map illustrates the pathways and changing water temperatures of the Gulf Stream as it works its way up the East Coast of North America. The stream is warm (orange) in the south where it starts, but cools (yellow to green) as it gets farther north and east, toward Europe. 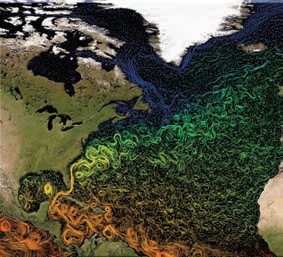