The State of Nebraska 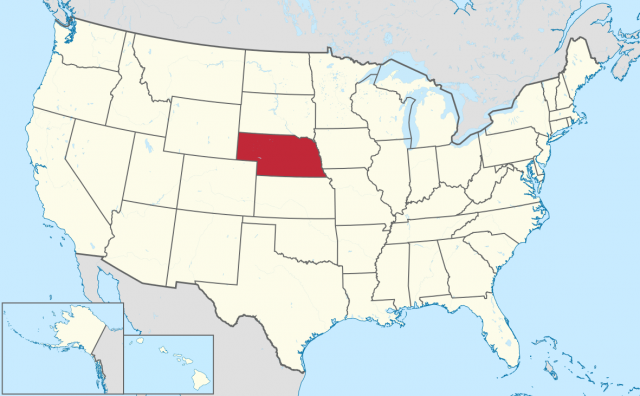 Nebraska is one of the Midwest states. Thousands of years ago, glaciers covered the eastern part of the state. These slowmoving ice forms left behind a rich layer of soil. Today, this fertile area is used for growing crops such as corn, soybeans, and sorghum.

The elevation of Nebraska rises gradually from southeast to southwest in a series of rolling plateaus. The central region, called the Sand Hills, is an area of sand drifts covered with grass and small lakes. Western Nebraska is an area of plains, slightly drier than the plains of eastern Nebraska. This area is used for growing corn.

There are very few trees in Nebraska; only about 2 percent of the state is forested. Tall prairie grasses, especially bluestem, grow in eastern Nebraska, while short grasses grow in the drier western region. Nebraska's mineral products include natural gas, petroleum, sand, and gravel.

Nebraska's weather can be extreme. In the summer, the climate is hot and humid. Winters are cold and snowy. The region sometimes experiences violent thunderstorms, tornadoes, hailstorms, and blizzards.

Stone tools found in Nebraska's soil suggest that Native American people lived there as long as 10,000 to 25,000 years ago. More recent groups, such as the Missouri, Oto, Pawnee, Sioux, and Omaha, were living in the region when Spanish explorers first arrived there in the late 1500s.

The area of Nebraska was alternately under Spanish and French control until it was sold to the United States in 1803 as part of the Louisiana Purchase. The government maintained Nebraska as a territory and prohibited white settlement until passage of the Kansas-Nebraska Act in 1854. That act allowed the newly established territories of Kansas and Nebraska to choose whether they would permit slavery.

Settlers moved to the region and built houses out of prairie sod because there were so few trees. After the Homestead Act of 1862, which promised settlers free land if they would farm it, Nebraska's population grew steadily. In 1867, Nebraska entered the Union.

Insects were a problem for farmers. Drought was also a problem until the 1890s, when farms began to use improved irrigation methods. Nebraska's farming industry continued to grow until the Great Depression of the 1930s, when the state again suffered from drought. During World War II, Nebraska's agricultural industry rebounded as farmers produced corn, oats, potatoes, and wheat in great quantities to contribute to the war effort.

The discovery of oil in the late 1930s also helped Nebraska's economy. New farm technology in the 1950s put many farmers out of work, though, and as they began to move to the cities, Nebraska became more urban. Manufacturing and other urban industries expanded.

Today, farming continues to be the most important economic activity in Nebraska. About 95 percent of the state's land is used for growing crops, including wheat and corn, and raising cattle and hogs.

The food-processing industry, which prepares Nebraska's agricultural products for market, is very important to the state's economy. Meat and grain processing are centered in the Omaha area.

Nebraska companies manufacture scientific, medical, and surgical equipment as well as farm equipment. Omaha and Lincoln have become financial and transportation centers of the Midwest. Mutual of Omaha, one of the nation's largest health insurance companies, is headquartered in Omaha. Both Omaha and Lincoln have railroad and trucking companies that move products from the Midwest all over the country.