What Are the Most Common Climate Types?

EACH TYPE OF CLIMATE, as defined by the Koppen climate classification, has specific characteristics that distinguish it from any other climate type. Once a climate is assigned to one of the five main groups (A–E), it is then categorized by factors such as whether most precipitation falls in the summer, winter, throughout the year, or during a monsoon, and whether the summer is hot, warm, or cool. The table on the right-hand page provides a reference for characteristics of each climate type. Four globes present the same information as the flat map on the previous two pages. Carefully observe each globe, guided by the table.

1. The arrangement of climates is least complicated in the oceans, away from the land. Here, climate types are arranged in belts that roughly parallel latitude, progressing from A-type (tropical) near the equator to B-type, C-type, and E-type toward the poles. Note that D-types (harsh mid-latitude) are rare over the ocean. Oceans moderate the temperatures.

2. Departures from this simple arrangement occur where ocean currents displace warm and cold water, and therefore climate types, north and south, like along the Gulf Stream.

3. B-type climates are those where precipitation is not abundant enough to replenish water that could possibly be lost through evapotranspiration (potential evapotranspiration). B-type climates generally occur in the dry, sinking air that characterizes the subtropics. The dry conditions are ameliorated around some water bodies, most notably the Mediterranean. Note that they also occur over the ocean.

4. As shown by the Indian and Pacific oceans, most A-type climates occur over the ocean, and these conditions spread, encompassing islands and adjacent landmasses, as in the region of Papua New Guinea, Indonesia, and the Philippines.

7. The patterns of climate types are most complex on land, especially in areas with large amounts of high relief and variations in topography. Steep gradients in climate types, as in western Asia, commonly reflect steep topographic gradients, such as those northeast of the Mediterranean Sea or from the high Tibetan Plateau to the tropical lowlands of southern India. Note that D-type climates over landmasses are largely restricted to the Northern Hemisphere, as in Siberia, but an oceanic belt of D-type climates also encircles Antarctica (not shown in this view). 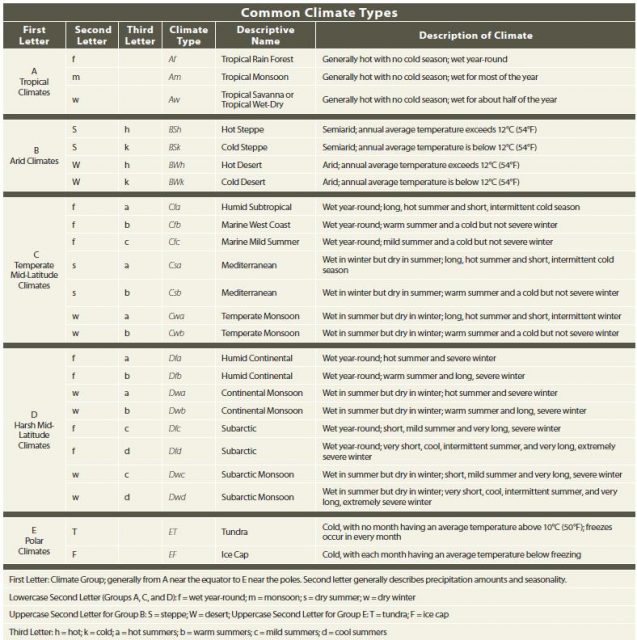