What Are the Phases of ENSO?

THE ATMOSPHERE OCEAN SYSTEM in the equatorial Pacific is constantly changing. Although each year has its own unique characteristics, certain atmosphere-ocean patterns repeat, displaying a limited number of modes. We can use surface-water temperatures in the eastern equatorial Pacific to designate conditions as one of three phases of the El Nino-Southern Oscillation (ENSO) system — neutral (or “normal”), warm (El Nino), and cold (La Nina).

What Are Atmosphere-Ocean Conditions During the Three Phases of ENSO?

El Nino and La Nina phases represent the end-members of ENSO, but sometimes the region does not display the character of either phase. Instead, conditions are deemed to be neither and are therefore assigned to the neutral phase of ENSO. To understand the extremes (El Nino and La Nina), we begin with the neutral situation.

3. Cool, descending air over the eastern equatorial Pacific produces dominantly high atmospheric pressure at the surface and stable conditions in the atmosphere.

4. Easterly trade winds flow over the Andes mountain range and then continue to the west across the ocean, pushing west against the surface waters along the coast of South America. The easterlies continue propelling the warm water westward toward Australia and southeast Asia, allowing the waters to warm even more as they are heated by insolation along the equator. 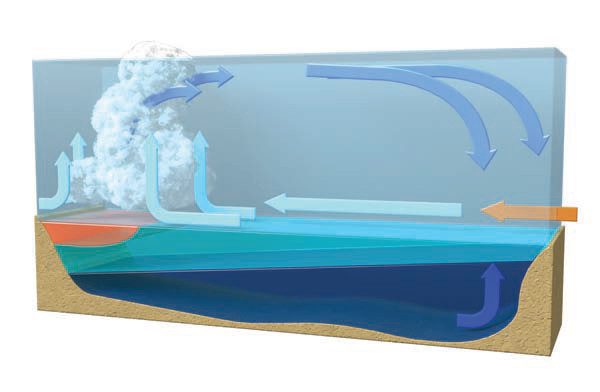 5. Westward displacement of surface waters, and offshore winds, induces upwelling of cold, deep ocean waters just off the coast of western South America. Abundant insolation under clear skies warms these rising waters somewhat, so there is no density-caused return of surface waters to depth.

6. The thermocline slopes to the west, being over three times deeper in the western Pacific than in the eastern Pacific. This condition can only be maintained by a series of feedbacks, including the strength of the trade winds.

7. In the western Pacific, surface waters are warm (over 28°C) and less saline because of abundant precipitation and stream runoff from heavy precipitation that falls on land. The warm surface waters (the warm pool) overlie cooler, deeper ocean water — a stable situation.

8. Warm waters blown to the west not only depress the thermocline to about 150 m below the surface, but also physically raise the height of the western equatorial Pacific compared to the eastern Pacific.

9. The warm, moist air above the warm pool rises under the influence of low pressures, producing intense tropical rainfalls that maintain the less saline, less dense fresh water on the surface of the warm pool.

1. During a warm phase (El Nino), the warm pool and associated convective rainfall move toward the central Pacific.

2. El Nino conditions are also characterized by weakened Walker cell circulation over the equatorial Pacific. This is expressed by decreased winds aloft and by a reduction in the strength and geographic range of the easterly trade winds near the surface.

3. Upon reaching South America, the cool air descends over equatorial parts of the Andes, increasing atmospheric pressure, limiting convectional uplift, and reducing associated rainfall in Colombia and parts of the Amazon. 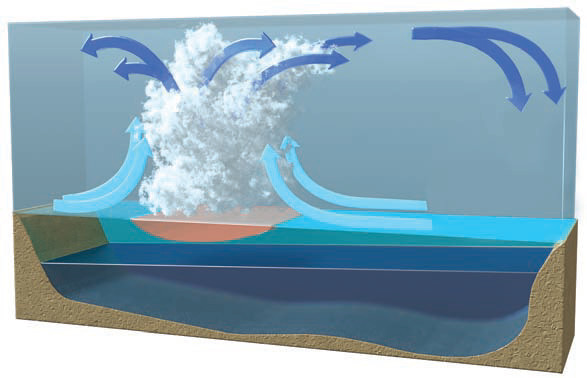 4. Weakening of the trade winds reduces coastal upwelling of cold water, which, combined with the eastern displacement of the descending air, promotes a more southerly location of the ITCZ in the Southern summer and increased precipitation in the normally dry coastal regions of Peru and Ecuador.

5. Changes in the strength of the winds, in temperatures, and in the movements of near-surface waters cause the thermocline to become somewhat shallower in the west and deeper in the east, but it still slopes to the west.

1.In many ways, the cold phase of ENSO (La Nina) displays conditions opposite to an El Nino, hence the opposing name.

3. Enhanced easterly trade winds bring more moisture to the equatorial parts of the Andes and to nearby areas of the Amazon basin. Orographic effects cause heavy precipitation on the Amazon (east) side of the mountain range.

4. Partially depleted of moisture and driven by stronger trade winds, dry air descends westward off the Andes and onto the coast. The flow of dry air, combined with the descending limb of the Walker cell, produces clear skies and dry conditions along the coast. 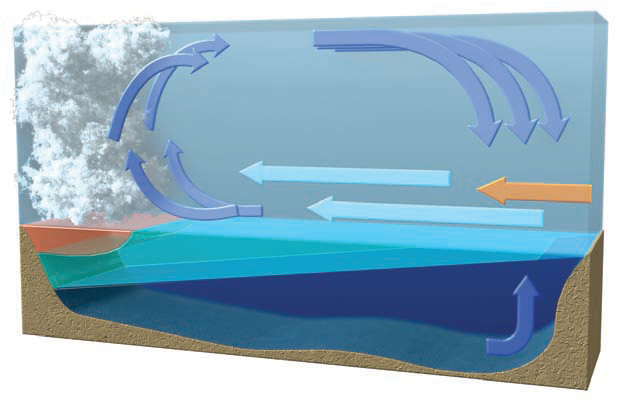 6. The upwelling near South America raises the thermocline and causes it to slope steeper to the west.

7. In the western Pacific, strong easterlies push warm waters to the west where they accumulate against the continent, forming a warmer and more expansive warm pool. In response, the thermocline of the western equatorial Pacific is pushed much deeper, further increasing the slope of the thermocline to the west.

8. The region of equatorial rainfall associated with the warm pool expands and the amount of rainfall increases dramatically.

How Are ENSO Phases Expressed in Sea-Surface Temperatures?

As the Pacific region shifts between the warm (El Nino), cold (La Nina), and neutral phases, sea-surface temperatures (SST), atmospheric pressures, and winds interact all over the equatorial Pacific. These variations are recorded by numerous types of historical data, especially in SST. The globes below show SST for the western Pacific (near Asia) and eastern Pacific (near the Americas) for each phase of ENSO — neutral, warm, and cold. The colors represent whether SST are warmer than normal (red and orange), colder than normal (blue), or about average (light).

During the neutral phase of ENSO, SST along the equator in the Pacific are about average, with no obvious warmer or colder than normal waters near the Western Pacific Warm Pool (left globe) or South America (right globe). An area of warmer than normal SST occurs southwest of North America, but this is not obviously related to ENSO. 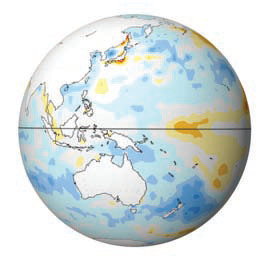 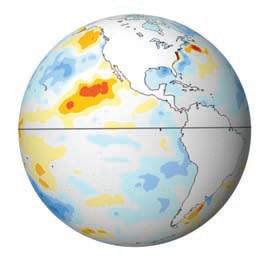 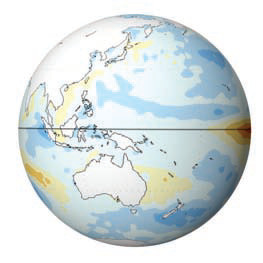 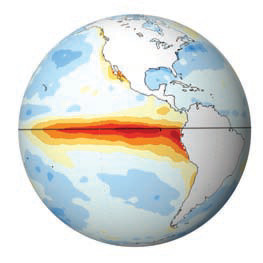 During the cold phase of ENSO (a La Nina), a belt of colder than normal water occurs along the equator west of South America, hence the name “cold phase.” The western Pacific (left globe), however, now has waters that are warmer than normal. These warm waters are quite widespread in this region, extending from Japan to Australia. 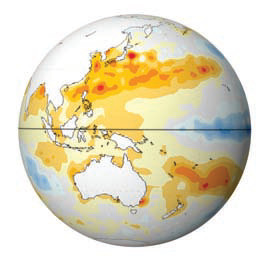 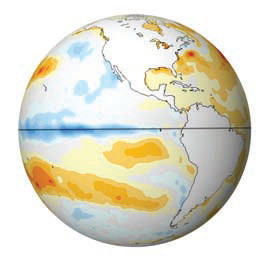