EQUATORIAL AND TROPICAL REGIONS are areas of greatest excess energy. The interaction of ocean and atmosphere systems there have great implications for climate and its variability in other parts of the world. In the same way that the Hadley cells establish connections between latitudes, there are large-scale, east-west connections within the equatorial atmosphere-ocean system. These connections are a major cause of global climate variability.

How Do Continents Impact Ocean Circulation?

The equator crosses two broad areas of land — South America and Africa — and a large number of islands of the maritime southeast Pacific, including those in Indonesia. These various landmasses block east-west flow in the oceans, turning ocean currents to the north or south. They also cause deep ocean currents to upwell along their flanks.

1. If there were no equatorial or tropical continents, the world would be circumscribed by a fairly homogeneous band of warm ocean water. The trade winds, north and south of the equator, would exert a small stress on the surface of the ocean, causing a net westward movement of the waters. 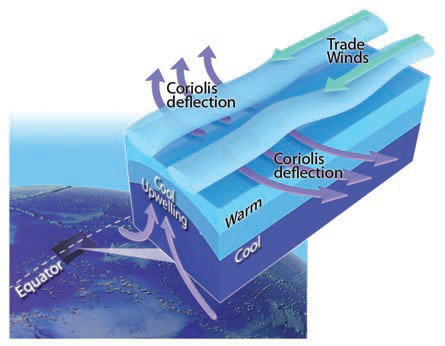 4. Continents and other landmasses are in the way of this westward flow of tropical ocean water, causing the warm water to accumulate, or pool, along the eastern side of the land, as expressed on this SST map. 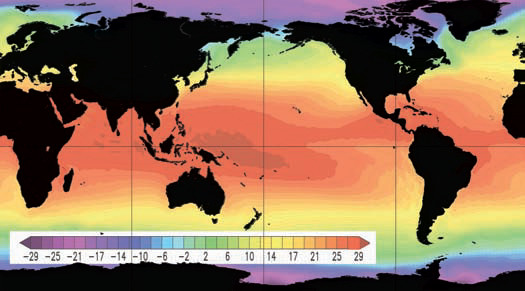 5. Islands and peninsulas between Australia and Asia block westward movement of warm surface waters, causing a ponding, or a warm pool, in the western equatorial Pacific.

6. Cooler waters, an expression of equatorial upwelling, are visible in the eastern Pacific.

How Do Warm Pools Influence Atmospheric Circulation Above Oceans?

1. Once formed along the eastern side of a continent, a warm pool can set up an east-west circuit of flowing air through the tropics.

2. Warm, moist air rises above the Western Pacific Warm Pool, where temperatures regularly exceed 28°C. As the air rises, it cools adiabatically, producing condensation, clouds, and intense rainfall, as well as releasing large quantities of latent heat into the troposphere immediately above the warm pool.

3. Unable to penetrate vertically beyond the temperature inversion at the tropopause, the air moves horizontally away from the warm pool. As it moves, it mixes with the surrounding cool air and cools.

4. Having cooled sufficiently, the air descends over the eastern Pacific, warming adiabatically.

5. This cooler, denser air from above turns west and passes back over the surface along with the trade winds, warming and evaporating moisture from the ocean surface as it proceeds westward.

6. This pattern of east-west equatorial atmospheric circulation, initiated by warm air rising above warm pools, is known as the Walker cell circulation. In 1923, Sir Gilbert Walker first reported “great east-west swayings” of the near-equatorial flow, in the manner represented on this figure.

Do Similar Circulation Patterns Exist over Other Oceans?

1. Warm pools are pronounced features of the global atmosphereocean system, as displayed on this SST map. Trade winds convey warm waters westward through the equatorial regions. In the Atlantic, this movement is blocked by South and Central America, ponding warm water off northern South America and in the Caribbean.

2. As shown in the wind-circulation patterns below the SST map, the Walker-like cell in the Atlantic begins with warm, rising air over the Amazon basin of South America — a hot, humid area of rain forest, and the Amazon River and its tributaries. To the west are the Andes along western South America, and the descending limb of the Pacific Walker cell, both of which restrict flow to the west from the Amazon.

3. The Atlantic Ocean is narrower than the Pacific, so the pattern of circulation is not as wide. Air rises above the Caribbean warm pool and the extensive wetlands and forests of the Amazon lowlands, resulting in intense tropospheric convection, second only in its intensity to that of the Western Pacific Warm Pool. Air in the Atlantic cell descends in the eastern Atlantic and over the western side of North Africa, enhancing the regional dryness. 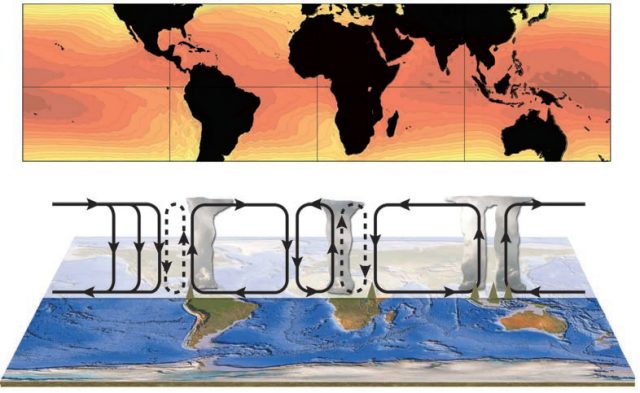 4. Heating and evapotranspiration from the moist forested surface of the Congo basin produces another zone of rising air and convection over this region, drawing moisture from the Atlantic deep into central Africa. The resulting Walker cell is narrow, being constrained on the west by the Atlantic cell and on the east by the Indian Ocean circulation and air motions in East Africa.

5. The Indian Ocean differs as its warm pool is located at its eastern edge. This reflects the influence of the adjacent larger Pacific warm pool and the porous barrier between the two. The break between the Pacific and Indian Ocean basins at equatorial latitudes is discontinuous, marked by the islands and straits of Indonesia and Maritime Southeast Asia (collectively referred to as Australasia), through which warm waters may pass. Also, the Indian Ocean is unique in not extending beyond about 20° N. The large continental mass gives rise to the Asian monsoon system, whose summer winds are from the southwest, blowing waters back to the east. Low atmospheric pressure is experienced at the surface above the warm pools, and higher pressure is beneath areas where the air is descending.

How These Circulation Systems Were Discovered

At the end of the 19th and into the early 20th century, India suffered several catastrophic droughts responsible for the deaths of millions. These droughts are displayed on the graph below, which shows departures of the total rainfall received annually in India from the summer monsoon compared to long-term averages (1870–2000). 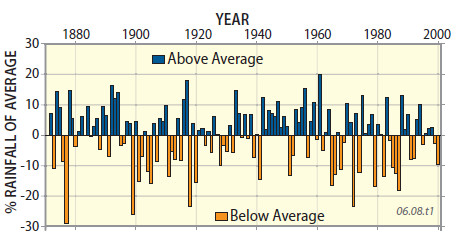 Sir Gilbert Walker was head of the British Indian Meteorological Department during the droughts of 1918 and 1920. Walker was interested in understanding the causes of drought, which naturally led him to investigate regional wind patterns and ocean temperatures, both of which are critically important to the Indian monsoon that is so crucial to the lives of the people of India and adjacent countries. Walker began publishing his research just as severe droughts ceased. Thus, his contribution was undervalued in his lifetime, as reflected in his 1959 obituary which states sardonically, “Walker's hope was to unearth relations useful for … a starting point for a theory of world weather. It hardly seems to have worked out like that.”

Only in the late 1960s, as drought became a problem again, was the significance of Walker's discovery fully recognized, and this principal causal mechanism of equatorial circulation and climatic variability was named in his honor.