What Affects the Strength of a Tropical Cyclone?

AS A TROPICAL CYCLONE MOVES, it responds quickly to changes in the environment it encounters. In some cases, environ mental changes will cause a tropical cyclone to strengthen, perhaps becoming a hurricane or becoming a stronger hurricane. In other cases, the new environmental conditions cause a cyclone to weaken, dissipate, and eventually disappear. Considering the conditions under which a tropical cyclone forms, what factors might strengthen or weaken it?

What Conditions Strengthen or Weaken a Tropical Cyclone?

1. These figures track the changes that occur when a tropical cyclone migrating across the surface encounters different conditions. The initial cyclone (shown above) is still growing, as expressed by its cumuliform top. The water below is just warm enough to sustain growth. 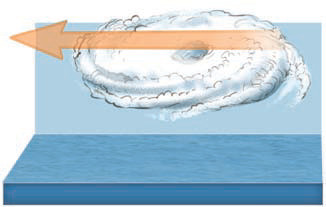 2. If the cyclone encounters even warmer sea temperatures, it may strengthen. The warmer water adds heat and additional moisture to the cyclone, moisture that will later generate even more heat (latent heat) during condensation, a key factor in cyclone growth. 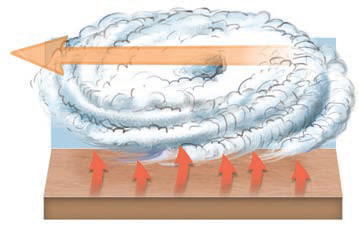 3. If the cyclone instead encounters cooler water, as when an Atlantic hurricane turns north in mid-ocean, it can lose thermal energy to the water. Also, the cooler water will not contribute needed moisture, and can even remove moisture by cooling the air. 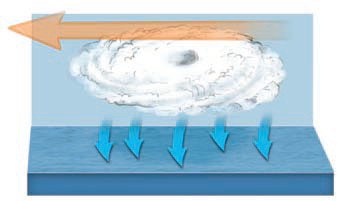 Encounters with Other Air Masses

4. If a cyclone advances into, or incorporates, a wetter air mass, the additional moisture can strengthen the cyclone. The incorporation of more moisture is unlikely as an air mass supporting a tropical cyclone is often at or near saturation already. 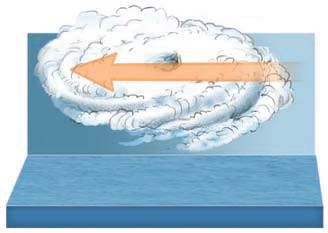 5. More commonly, a cyclone advances into, or incorporates drier air. As the dry air is entrained, cloud development ceases and cloud cover thins, eventually disappearing due to evaporation into the drier air. The loss of moisture robs latent heat from the storm, and this is how many cyclones dissipate. 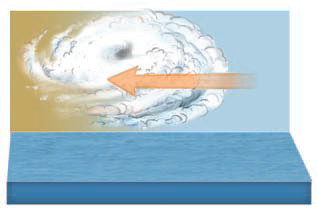 6. A migrating cyclone will often cross onto land. Once it is over land, the cyclone no longer has an unlimited supply of empowering moisture. Also, the land can be warm and dry, or cold, but in either case, it will remove moisture and energy from the storm. 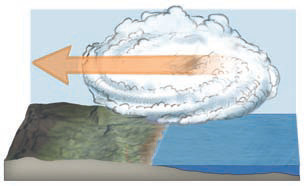 7. A cyclone can interact with surface topography. This increases friction, slowing the winds. Mountains also remove large amounts of moisture in the form of precipitation due to orographic effects. Such settings are one of the main causes of cyclone-related flooding and fatalities. 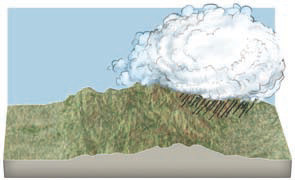 8. Vertical wind shear is the difference in wind speed or direction between the upper and lower atmosphere. While strong vertical wind shear assists in extra-tropical thunderstorm development, it generally tears apart or dissipates tropical cyclones. Fast winds in the upper-troposphere will shear off the top of the developing tropical cyclone, as the near-surface trade winds push the base of the storm in the opposite direction. Note that vertical wind shear can spread out a storm's latent heat release over a larger area (as represented by the red boxes), limiting buildup of the storm.

9. Although not illustrated here, upper-level pressures can act to strengthen or weaken a tropical cyclone, like they do for a mid-latitude cyclone. They also influence the path of the storm, by drawing it into a trough of low pressure or steering it away from a ridge of high pressure.

What Types of Damage Are Associated with Tropical Cyclones?

Much damage from hurricanes and other tropical cyclones is from the high winds, which can reach hundreds of kilometers per hour. Also, tornadoes and other strong local winds embedded within the larger storm can cause more localized, but severe damage. 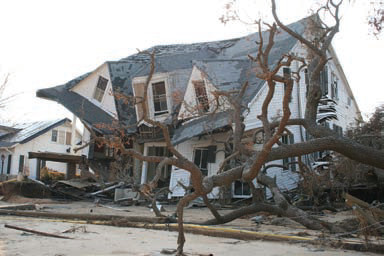 In addition to being subjected to strong winds, shorelines are inflicted by rough surf associated with the very large waves. The waves can erode parts of the beach, making houses even less protected, dumping sand far into neighborhoods. 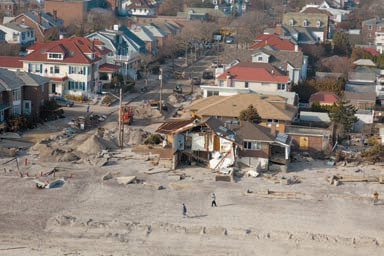 The storm surge associated with tropical cyclones also inundates low-lying areas along the coast. Much damage and death, however, also result from the flooding that occurs farther inland from streams whose waters are swollen by very high amounts of rainfall. 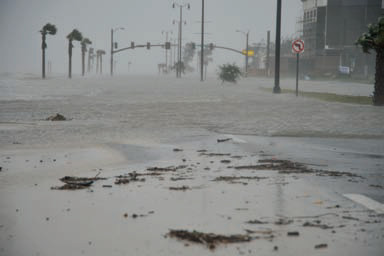 Recall that tropical cyclones form a mound of water beneath them, in response to the very low air pressure. When the storm approaches shallow coastal waters, this mound forms a wave, called a storm surge that rises as it approaches the shore. A storm surge can be devastating, flooding coastal areas with over 9 m (30 ft) of water. If the storm surge arrives at the same time as high tide, it is superimposed on the already-high water level. Also, the strong winds around cyclones push water in front of them, so the amount of storm surge can increase if a shoreline is in the direct path of the winds (northeast side of storms hitting the U.S.). Storm surges can bring marine objects onshore, including ships. 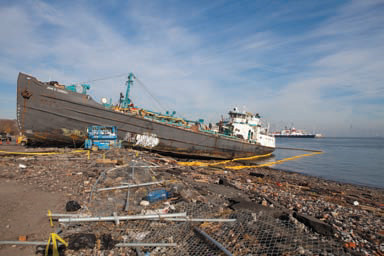 Meteorologists and newscasters commonly refer to a “category 3 hurricane,” but what does this term actually indicate? This table shows how we categorize the strength of tropical cyclones.

The least energetic type of tropical cyclone considered dangerous is a tropical depression, so named because it is an area of low pressure. A tropical depression has at least one closed isobar on an air-pressure map, and successive tropical depressions are numbered sequentially in a given ocean basin each year (1, 2, 3, etc.). Once a tropical cyclone gains wind speeds of 64 km/hr (39 mi/hr), it is called a tropical storm and given a name. The first storm of the season in a given ocean basin receives a name that begins with an A, the second begins with B, and so on. If a named storm strengthens to wind speeds of 119 km/hr (74 mi/hr), it is termed a hurricane, typhoon, or cyclone, depending on the part of the world where it occurs. Atlantic and eastern Pacific hurricanes are then further classified according to their intensity on the Saffir-Simpson scale (named after the two people who devised it). The weakest hurricane is a category 1 hurricane, and the strongest is a category 5 hurricane. The amount of expected damage increases nonlinearly with storm strength (e.g., a category 4 storm generally produces more than four times the damage of a category 1 storm). Storms of Category 3–5 are often called “major” hurricanes, typhoons, or cyclones.