Where and When Do Tornadoes Strike?

THE INTERIOR OF NORTH AMERICA has by far the most frequent tornado activity in the world. Tornadoes also occur, but far less frequently, in Europe, in the southeastern parts of South America and South Africa, and in a few other regions. Large parts of some continents, like all of North Africa and northern Asia, do not report any tornadoes. Where and when should we expect tornadoes in the U.S., and what causes the huge disparity between the central U.S. and most of the rest of the world?

How Does Tornado Frequency Vary Across the Continental U.S.?

The continental U.S. is the site of numerous tornadoes each year, especially in a north-south belt through the middle of the country. Most of these tornadoes occur in the warm sector of a mid-latitude cyclone, ahead of an associated cold front that has great thermal contrasts between the warm and cold sectors. Such situations are most common in the mid-latitudes.

Examine this map, which shows the frequency of tornadoes in different counties across the continental U.S. From this map, three areas experience the highest incidence of tornadoes, one in the center of the country, one along the Gulf Coast, and one in Florida. The large-scale patterns reflect the typical types of fronts and other weather activity that occur in the different regions. The geography of North America also contributes to the high frequencies. The major mountain ranges are oriented from north-to-south rather than east-west, which allows warm air and cold air to meet in the center of the continent.

The region of most tornadoes is along a north-south belt, running from north Texas northward to the Dakotas and into Canada — this is justly called Tornado Alley. Many of these tornadoes are strong, but some storms lack enough moisture to produce violent tornadoes. 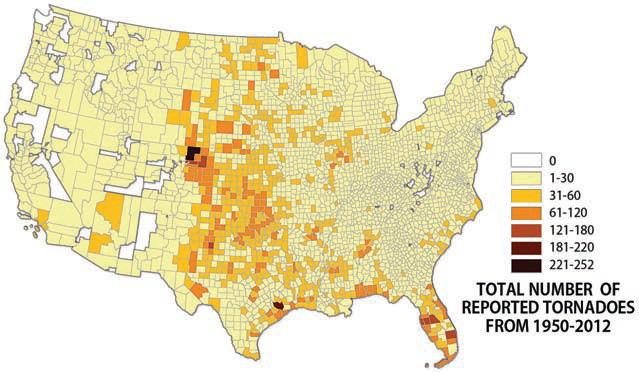 Florida experiences frequent tornadoes, many forming in association with single-cell thunderstorms or with tropical cyclones. These are mostly weak tornadoes and are overall not as deadly. For those related to tropical cyclones, people have already evacuated from less sturdy structures because of earlier warnings about the approaching larger cyclone.

Another concentration of tornadoes appears along the Gulf Coast and adjacent inland areas — a region called Dixie Alley. Dixie Alley tornadoes are often more deadly than their Tornado Alley cousins, in part because they are often hidden in thunderstorms amid abundant Gulf of Mexico moisture. 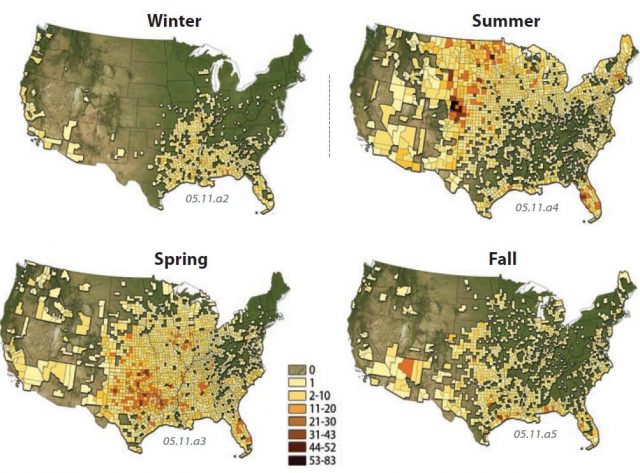 These maps show frequencies of tornadoes for four different months, each representing a season, from 1950–2010. Compare the frequencies in different seasons and try to explain regional patterns.

How Does Tornado Frequency Vary Globally?

Tornadoes occur in other parts of the world, but are less frequent than in the tornado-prone parts of the U.S. Examine the map below, where each dot represents an area where tornadoes occur, and think how it compares to the previous one displaying the global distribution of thunderstorms, as expressed by lightning measurements.

The central U.S. clearly experiences the highest frequency of tornadoes. Tornadoes occur north into the Prairies of Canada, and others in Hawaii (on the western edge of the map).

Unlike North America, Europe has large, east-west-oriented mountain ranges that inhibit the meeting of very warm and very cold air. Therefore, tornado frequencies are lower in Europe than in North America. Nevertheless, a mid-latitude location, a high population density, and sophisticated detection abilities ensure that reported sightings of tornadoes are fairly high.

Central and northern Asia report few tornadoes, but part of this may be due to underreporting in the vast, less populated areas.

Few tornadoes are known to occur over open seas because surface heating is far less intense over oceans than over land. The apparent lack of tornadoes is partly due to a lack of radar coverage over the oceans to detect them. Regions covered by sophisticated detection systems, such as the U.S. and Canada, tend to report more tornadoes.

The lowlands of mid-latitude South America and Africa also have some tornadoes. Recall that the maps showing lightning indicated thunderstorms here.

The high frequency of tornadoes in south Asia and parts of Australia is largely attributable to their proximity to a supply of warm, moist air. These areas also showed a high density of activity on the lightning-strike map.

This graph shows the average frequency of tornadoes versus time of day, using data for St. Louis, Missouri. Here, tornadoes typically occur in the afternoon but continue into the evening and night. These nocturnal tornadoes are often the most deadly, for two reasons. First, people are asleep or otherwise less likely to be alert for tornado watches and warnings. Second, nocturnal tornadoes are proportionately more likely to occur in association with storm systems that are well organized, long-lived, and strong, such as multi-cell storms. Other locations in Tornado Alley, Dixie Alley, and Florida display similar temporal patterns. 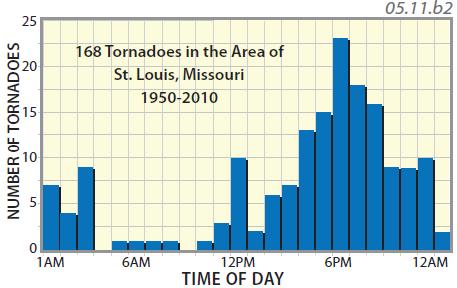 The tendency for tornadoes to strike in the afternoon and early evening partly accounts for the relatively dark and foreboding aspect of most photographs of tornadoes — the Sun is low in the sky or has started to set. The thick, dark clouds help too, especially when the tornado occurs in multi-cell or supercell thunderstorms. 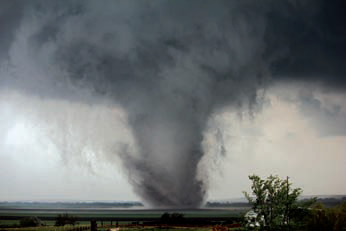