THUNDERSTORMS ARE COLUMNS of moist, turbulent air with variable amounts of rain, strong wind, lightning, and hail. They are perhaps the most fundamental of all organized weather systems. They can provide needed rainfall for crops, but they can be accompanied by severe weather. We begin by examining the formation, growth, and decay of an individual thunderstorm that is independent of larger storm systems — the single-cell thunderstorm — and then explore the formation of thunderstorms that occur in clusters or in large, consolidated masses.

1. The initial cumulus stage of development of a single-cell thunderstorm occurs when the surface heats more rapidly than the atmosphere above it. This causes the heated near-surface air to rise relative to adjacent air, forming an updraft. Usually, such conditions begin to appear in mid-to-late morning, particularly in summertime. If the air is moist, one or more isolated cumuliform clouds will begin to form, starting out as a cumulus cloud. No rain is falling during this stage — the cloud is still growing, as indicated by the puffy, cauliflower-shaped top. Most developing cumuliform clouds never get past the first (cumulus) stage, either because the atmosphere is not sufficiently unstable, or is not moist enough, or both. 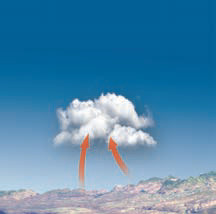 2. The beginning of rainfall signals onset of the next stage — the mature stage. At this stage, the updrafts that allowed the cloud to grow in the cumulus stage are accompanied by downdrafts induced by falling precipitation. Most lightning occurs during this stage. If the thunderstorm is too tall, its top can flatten against the tropopause, where the very stable conditions in the temperature inversion of the stratosphere forbid higher vertical development. The strong upper-level winds produce an anvil-shaped cloud top. Evaporation of some cloud water drops cools the downdrafts, particularly on hot summer afternoons. Upon hitting the surface, the downdraft will move laterally in the direction of the winds that are pushing the storm, producing the cool wind gusts we feel before a storm. 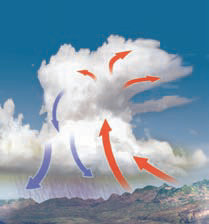 3. Eventually, enough rain falls to cool the surface, removing the unstable conditions that caused rising motions. This dissipating stage is characterized by continued rainfall until much of the moisture is rained out of the cloud. At this point, the cloud begins to disappear, taking on a ragged, feathery appearance, as it mixes with dry air from outside the cloud and evaporates into the surrounding air. Water in the cloud that does not precipitate may eventually evaporate into the surrounding drier air. 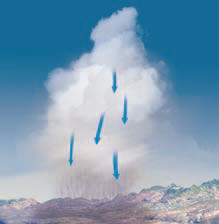 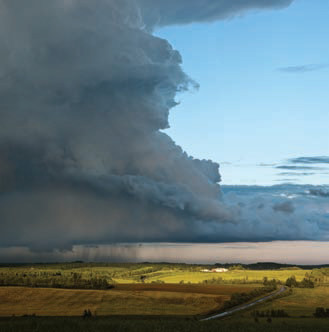 5. A single-cell thunderstorm can form or grow when two cumuliform clouds are forced together by winds. In this figure, adjacent fair-weather cumuliform clouds are supported by uplift associated with an unstable atmosphere, but no cloud has enough moisture and uplift to be dangerous by itself. When the clouds collide, the instability and associated uplift beneath the collision point dictate that the moisture from both clouds must move upward. This causes very rapid vertical development and a sudden storm that may be difficult to anticipate. 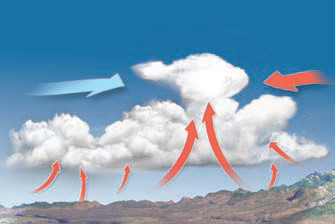 6. A thunderstorm that forms beneath strong winds aloft, such as the polar front jet stream, has an increased likelihood for development or intensification. Any increase in horizontal wind speed with height is called vertical wind shear. The fast winds in the top part of a tall thunderstorm, driven by the jet stream, may allow some of the rain from the storm to fall in areas separated from the updrafts. This reduces the possibility that the downdrafts associated with the falling precipitation will get in the way of, and cool, the updrafts that are sustaining the system. If vertical wind shear allows the precipitation to remain separated from the zone of uplift, the surface remains warm, allowing updrafts and overall atmospheric instability to continue for an extended time. This in turn allows the thunderstorm to persist and possibly grow stronger, increasing the possibility of more severe weather. 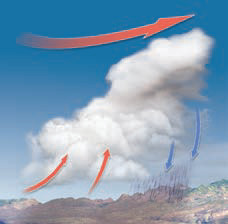 1. This figure shows two thunderstorms that are close enough to affect one another. In well-organized thunderstorms, downdrafts from one thunder storm can contribute to updrafts in an adjacent thunderstorm. This happens because the downdraft of cold, dense air spreads out when it hits the surface, pushing warmer air upward, thereby strengthening a nearby thunder storm or even triggering a new one. The downdrafts and resulting outflow can cause warm air ahead of the outflow (A) to be displaced upward to such an extent that it triggers another thunderstorm, or even a row of thunderstorms, as shown in the radar image to the left. These types of systems, where downdrafts coming from a line of storms produces another line of storms, proceed in a “conveyor belt” fashion and can affect huge regions. These types of storms are called multi-cell thunderstorms. 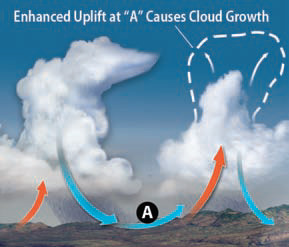 2. Lines of thunderstorms commonly form along cold fronts, especially where the two air masses have very different moisture characteristics. This often happens as hot, dry (cT) air masses from the west interact with warm, moist (mT) air masses from the southeast. This interaction can be driven by movement of a cold front and mid-latitude cyclone, but both of these air masses will be in the warm sector of the cyclone, as shown here. Such air masses meet at a typically north-south boundary called the dry line. Along the dry line, the more humid air mass will be lifted up and over the drier air mass, assuming that both are at the same temperature, because humid air is less dense than dry air. The resulting storms can have an ominous front, a squall line, and so are called squall-line thunderstorms. They can be very severe due to the abundant moisture in the humid air mass, often even more severe than the storms generated by the subsequent passage of the cold front. 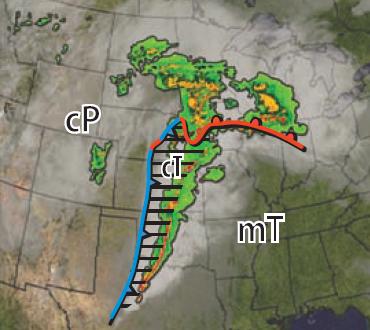 3. Some single-cell thunderstorms develop into supercell thunderstorms, tall and powerful storms. Like other large thunderstorms, supercell thunderstorms commonly have a flat-topped, anvil shape. The long point of the anvil generally indicates the direction the storm is moving (left to right in the figure below), because the strong upper-level winds push the entire surface storm in the same direction that they push its top. The anvil indicates the presence of vertical wind shear (increasing wind speed with height), which assists storm development by enhancing uplift and allowing precipitation to fall away from the updrafts. 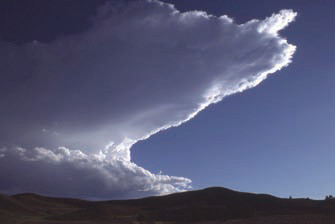 4. Intense rain and hail form within supercells and fall toward the ground, often in brief but heavy downpours. Note that hail can form in other types of storms, too. Lightning and thunder are also present in most supercells. Lightning may discharge in the air or reach the ground.

5. Supercells feature a rotating vortex called a mesocyclone. All supercells have at least one mesocyclone, and some supercells may support several. The rotating vortex is interpreted to have started out horizontal, where it was formed by horizontal shearing of the wind against the surface. Later, updrafts within the thunderstorm distort the vortex into a steep orientation.

6. Subsequent updrafts can spiral into the mesocyclone, strengthening it by tightening its rotation and ultimately leading to formation of a tornado. About onethird of mesocyclones form tornadoes.

7. As in multi-cell storms, outflow from downdrafts can be very strong and can be the catalyst of other storms. In the case of a supercell, the system is so strong that much of the available latent energy released in condensation and deposition is consumed in the large and long-lasting supercells. Such storms can last several hours, be 20–50 km in diameter, and support more catastrophic severe weather than other systems.