How Do Migrating Anticyclones Form and Affect North America?

ANTICYCLONES ARE ROTATING ZONES of high pressure. Most migrate across Earth's surface, guided by large-scale atmospheric circulation, but some stay or reappear in the same general area year after year. As migrating anticyclones approach, pass over, or leave an area, they cause changes in wind direction, temperature, and moisture. They are typically associated with non-stormy weather, but they sometimes cause fog and an increase in smog. They can block the motion of cyclones or guide them one way or another, and they influence our weather in other ways.

Where Do Anticyclones Occur?

There are two types of anticyclones: semipermanent anticyclones that remain in the same general area for entire seasons and year after year, and migrating anticyclones. Both types are zones of high pressure associated with clockwise rotation in the Northern Hemisphere and counterclockwise rotation in the Southern Hemisphere, opposite to the rotation of cyclones. Unlike cyclones, no fronts trail from anticyclones because the sinking air doesn't allow for cooling, cloud formation, and the release of latent energy needed for generating strong winds. So pressure gradients around anticyclones are generally weak, as weak pressure gradients are associated with light winds. Where cyclones tend to bring stormy, unsettled weather, anticyclones bring atmospheric stability and fair weather. 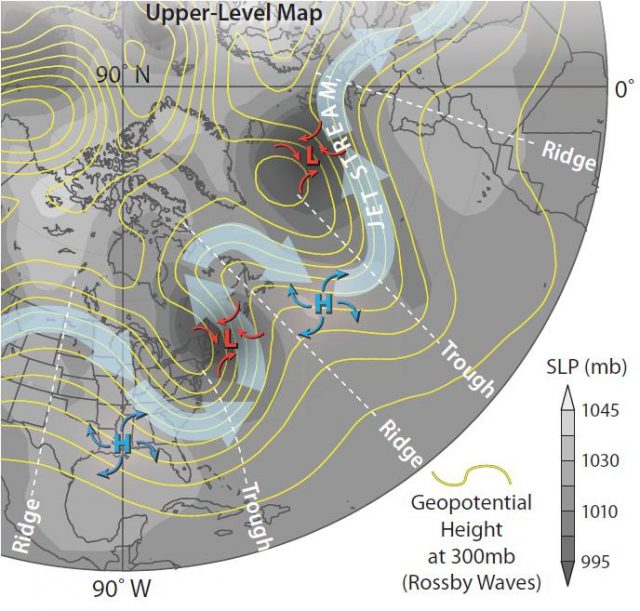 This map shows two surface anticyclones, each shown as a blue “H,” and two surface cyclones, each marked by a red “L.” The polar front jet stream is represented by large blue arrows. The lines are isohypses at the 300 mb level, and so depict upper-level pressures. The gray shaded areas show surface air pressures, with darker gray indicating lower pressures. Each cyclone is associated with an area of low surface air pressure.

Since the positions of the surface anticyclones are set to some degree by the position of the Rossby waves, they can remain relatively fixed as long as the ridges in Rossby waves remain in about the same location. In this way, the positions of some anticyclones remain broadly fixed year after year, but they may strengthen, weaken, or shift laterally from season to season. These are the semipermanent anticyclones, and they include some familiar high-pressure areas, like the Bermuda-Azores High, the Hawaiian High, and the Siberian High. Just as there are these semipermanent anticyclones, there are semipermanent cyclones, like the Aleutian Low and the Icelandic Low. Which pressure feature is the northernmost low-pressure zone shown on this map?

Where Do Mid-Latitude Anticyclones Commonly Form?

High-pressure zones associated with anticyclones form in different settings than cyclones. Once formed, most midlatitude anticyclones migrate in the direction of large-scale atmospheric circulation (west to east), all the while rotating clockwise (in the Northern Hemisphere). Many anticyclones result from convergence in Rossby waves.

Where upper-level air moves from the ridge to the trough of a Rossby wave, the air converges and slows down slightly. This in turn forces some of the air toward the surface, causing an area of surface high pressure below the convergence. The air around this high pressure rotates, clockwise in the Northern Hemisphere and counterclockwise in the Southern Hemisphere. In this manner, a surface anticyclone forms below the ridge-to-trough part of a Rossby wave. As it descends, the air heats up adiabatically. 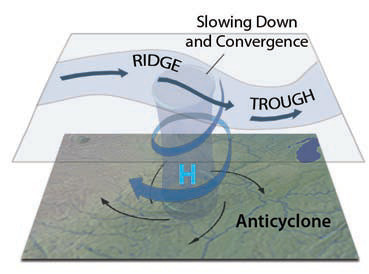 Once formed, the mid-latitude anticyclone will migrate across the surface, guided by regional wind directions, such as the westerlies, and by the upper-level air circulation patterns. As we observed previously, anticyclones commonly move parallel to the isohypses, moving east and southeast across the U.S. Zones of high pressure can be formed in other ways, such as by descending air in the subtropical limb of the Hadley cell, forming
subtropical high-pressure areas.

How Do Anticyclones Typically Migrate Across North America?

Migrating mid-latitude anticyclones can cross the entire continent, driven east by the prevailing westerlies. They form and are likely to grow beneath the ridge-to-trough side of the Rossby wave, and they tend to migrate beneath this side of the wave as well, in a general east-southeast direction.

1. The maps below track the path of a surface anticyclone (shown with a blue “H” and clockwise rotation) during the course of several days. The shades of gray represent surface air pressure, with lighter gray indicating high pressure and darker gray indicating lower pressures. The yellow lines are isohypses at the 300 mb level, depicting upper-level conditions. The map also shows several surface cyclones (each as a red “L”), but our focus here is on the anticyclone. The legend is to the right. 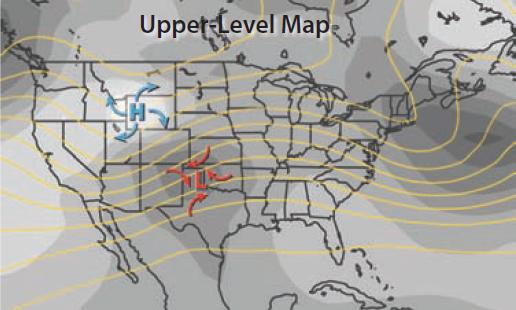 2. In this first map, the anticyclone is located over western Wyoming, and a cyclone lies just to its southeast. There is a strong pressure gradient between the two, as implied by the rapidly changing shades of gray, resulting in strong 300 mb winds, implied by the tightly packed isohypses in the area. 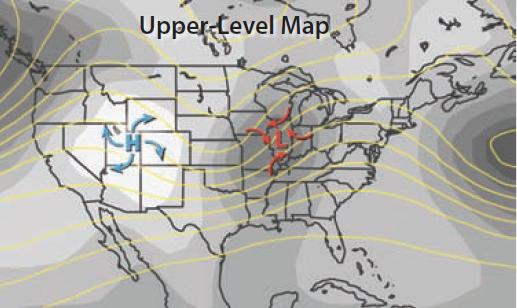 3. On this second map, the anticyclone has moved south. The clockwise circulation around the high causes a different wind direction on each side of the high. In this relatively dry region of the continental interior, high pressure generally means clear skies. 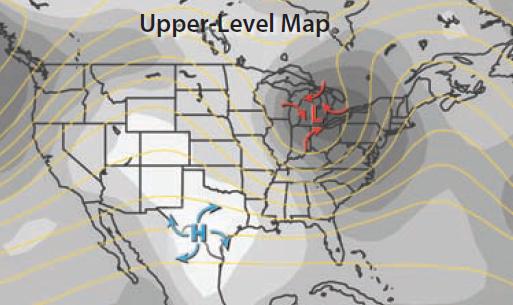 What Changes in Weather Occur When an Anticyclone Migrates Over an Area?

An anticyclone is characterized by descending air, so it tends to bring stability to the atmosphere, resulting in clear skies and fair weather, or fog under certain circumstances.

1. Air descending in the atmosphere is generally cooler, but warming. The clear skies, however, allow for more insolation during the day, warming the land and air. The same clear skies also allow much of this heat to radiate into space at night, resulting in cool nights and a large temperature contrast between day and night.

2. The moisture in the surface air may be cooled and trapped by this descending motion, causing fog in certain settings. The downward flow can trap smog and other air pollution near the surface, especially if there is a temperature inversion.

3. The clockwise circulation can pin cold air against mountains when the cold air is too dense to move uphill. This often occurs on the western side of the Appalachian Mountains, and, if temperatures are cold enough, often creates temperature inversions with sleet, freezing rain, and snow. 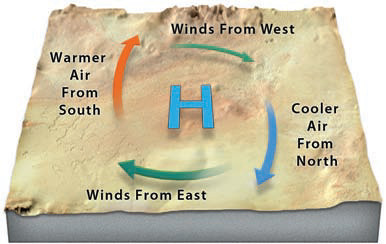 4. As an anticyclone approaches an area, winds will change direction depending upon the direction of approach (usually from the west or northwest). In front of an eastward progressing high (on the right in this view), cold air blows in from the north. After the high passes, warm winds blow from the south. North or south of the high, winds blow east or west. By employing this pattern, we can use wind directions to assess the larger weather picture. This approach works for cyclones, too, but the wind directions are opposite.