Where Do Mid-Latitude Cyclones Form and Cross North America?

WEATHER FRONTS generally do not exist in isolation, but typically form, migrate, and fade away as part of a larger system called a mid-latitude cyclone. Cold and warm fronts usually trail from a central core of low pressure — a cyclone. While popular culture uses the term “cyclone” to refer to a tornado or other form of wind storm, a cyclone is really any enclosed area of low pressure. Mid-latitude cyclones migrate across Earth's surface guided by large-scale atmospheric circulation, like the polar front jet stream and the westerlies.

Cyclones originate in various places as long as conditions in the lower and upper atmosphere are favorable for cyclogenesis. Commonly, however, they develop downwind of mountain ranges or just offshore of cold land. In addition to forming near certain surface conditions, cyclogenesis is favored by flow in the upper atmosphere, especially along bends in the polar front jet stream — Rossby waves.

Leeward Side of Mountains

As air moves downslope on the lee side, it becomes stretched vertically as the depth of the atmosphere increases. In doing so, it acquires an increasing tendency for counterclockwise spin, or vorticity, wherever cold and warm air masses meet. In the U.S., westerlies cause cyclones to form east of large mountain ranges.

Cyclones also form over water, offshore of cold land. This can occur during the colder times of the year, when the coastal land has cooled more rapidly than the adjacent water. Rising air over the ocean forms an area of low pressure just offshore. This, plus winds blowing toward the pole, cause the cold-warm interface along the coast to initiate potentially violent storms because of the abundance of moisture.

1. A jet stream can develop bends, much like a meander in a river. In the Northern Hemisphere, a trough in the polar front jet stream is a bend to the south and a ridge is a bend back to the north. As the fast-moving air passes from a trough to a ridge it usually accelerates. 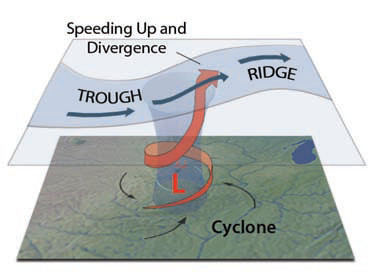 2. As the air spreads out laterally, the decrease in pressure sets up an upward flow of air from lower in the atmosphere to the part of the jet stream that is diverging. As a result, an area of low pressure forms at the surface and begins rotating, forming a cyclone. Times when the Rossby waves are most accentuated (curved) are favorable for the formation of mid-latitude cyclones.

3. The map on the right shows how Rossby waves appear on a map showing upper-level air pressures. To show upperlevel pressures, we commonly use a constant-pressure map, which plots lines, called isohypses, to represent the height (in meters) that you would have to go up in the atmosphere in order to reach a certain pressure. Higher heights correspond to higher pressure aloft. In this map, darker is low heights (pressure) and light shading is high heights and pressure. The dark, nearly circular feature is an area of low pressure, or a trough. 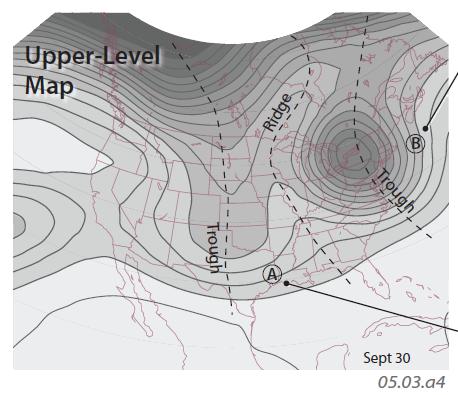 4. This map shows isohypses for 300 mb of pressure, high enough that air at this height only experiences approximately 30% of the atmospheric pressure compared to sea level (an average of 1,013 mb). A 300 mb pressure is up about 9,000 m (9 km), at the heights where the jet streams operate. The scale for the map is given here, with heights in meters.

5. Cyclone B is on the flank of the deep trough of low pressure, on the trough-to-ridge side of a Rossby wave. In this position, an upward flow of air into the upper atmosphere helps strengthen the cyclone below. The cyclone will move to the northeast, continuing to be strengthened.

6. Note that the pressure gradient is weaker near cyclone A. There is some lateral spreading (divergence) of the air, indicated by the shape of the isohypses, north and east of A, where the isohypses spread apart. Remember that air at these heights generally flows parallel to lines of equal pressure (equivalent to isohypses), so if isohypses diverge or converge, the airflow does too. The divergence at the 300 mb level helps draw air up from the surface, strengthening the cyclone. In the Northern Hemisphere (the case shown here), air overall flows from west to east (left to right).

What Are Common Tracks for Mid-Latitude Cyclones Across North America?

There are several common origins and paths of cyclones, influenced by the position of mountains and coastlines. Once formed, cyclones are guided by large-scale patterns of atmospheric circulation and so follow similar paths — or storm tracks — across the surface. The combinations of specific sites of formation and common tracks produce storms with similar characters, paths, and associated weather, like those shown for North America below.

1. Low pressure off the west coast of North America, in the Gulf of Alaska, can spawn cyclones that bring cold, moist air from the ocean inland across Canada and the Pacific Northwest. These storms can deliver heavy rain along the coast and snow at higher elevations. Due to orographic effects, precipitation is especially heavy along west-facing slopes of coastal mountains.

2. Cyclones also form on the leeward sides of major mountain ranges, like the Canadian Rockies in British Columbia and Alberta. A storm formed here commonly incorporates cold Arctic air and is called an Alberta Clipper. Similar storms form east of the southern Rocky Mountains in or near Colorado, but are not as cold.

3. Wintertime lows also form in the Gulf of Mexico, and are called Gulf Lows. They arise because of the contrast between the cold land and the waters of the Gulf, which remain fairly warm. 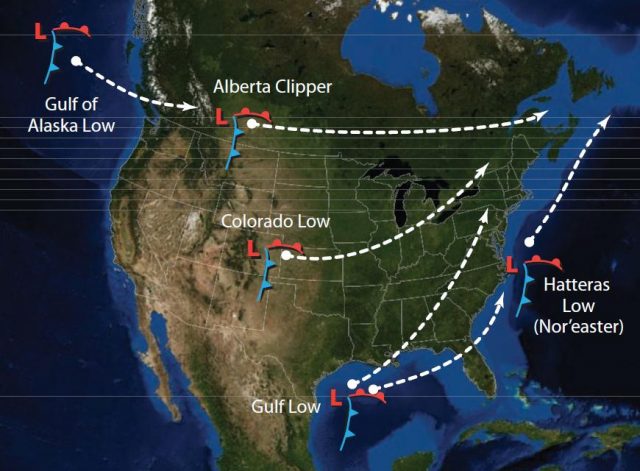 4. During winter, low pressure commonly occurs over the Atlantic Ocean, often near Cape Hatteras in the Outer Banks of North Carolina. Storms formed at this general area, called Hatteras Lows, move northward where they are also called Nor'easters. They are challenging to forecast because a slight variation in track can mean the difference between a foot or more of snow and none at all in the heavily populated areas of the Northeast.

5. Note that although the storm tracks converge near New England, when the storm systems arrive, they are often older, having spent most of their latent energy before they track to the New England area. So, New England has many cloudy days but less severe weather than places experiencing less mature storms.

6. The maps below show a surface cyclone, located at the low-pressure area labeled “L.” The bottom map is two days later than the top map. The lines are 300 mb isohypses and are color coded to indicate their position with regard to the upper-level trough in the center of the top map. On these maps, note the correspondence of the surface cyclone and upper-level patterns.

7. The maps below show weather maps of the same cyclone (and an anticyclone to the west as the blue “H”), with fronts depicted with standard symbols for warm, cold, stationary, and occluded fronts. The lines represent surface air pressures. 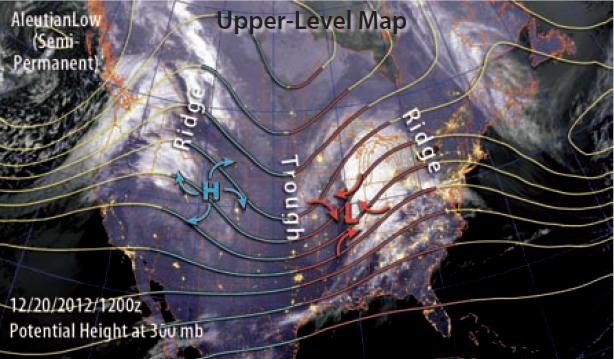 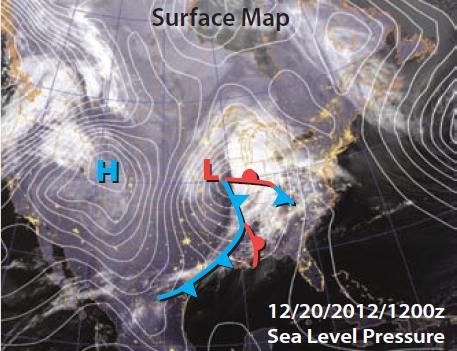 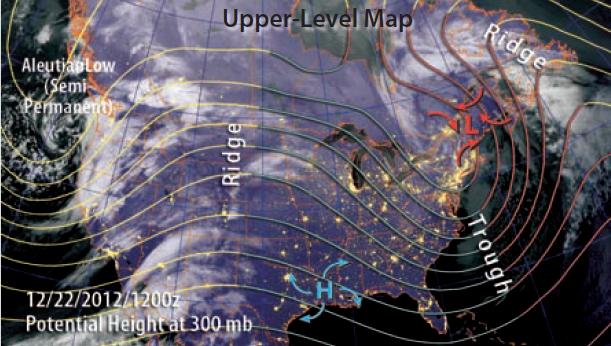 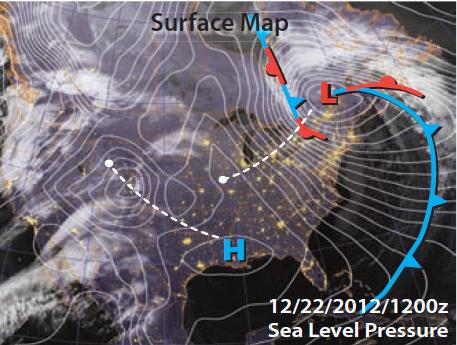 8. The region shown is governed by west-to-east winds (westerlies) and movement of the Rossby waves, so the cyclone and anticyclone both generally move toward the east. However, the cyclone turns northeast and the anticyclone turns southeast, both moving parallel to the upper-level isohypses (left pair of maps). Mid-latitude cyclones will generally track northeastward, following the trough-to-ridge side of the Rossby wave. Accelerating and diverging upper-level winds on these sides will move the surface cyclone toward the northeast and strengthen it. Surface anticyclones often move
southeastward.