How Does Air Circulate Aloft over the Mid-Latitudes?

SURFACE WINDS IN THE MID-LATITUDES are generally from west to east in both hemispheres, but the pattern of air movement is less well developed higher in the troposphere. The main features are two currents of fastmoving air — jet streams — that encircle the globe near the boundaries of the mid-latitudes. What factors determine the direction and speed of airflow aloft in the mid-latitudes, such as in the jet streams?

What General Circulation Occurs Aloft over the Westerlies?

The main direction of surface air in the mid-latitudes is as curving arcs that move poleward away from the subtropics and then bend increasingly to the east, becoming westerlies. What happens aloft? The figure below shows the setting of upper-level airflows in the mid-latitudes, between the polar cell and the Hadley cell.

2. The upper part of the polar cell has west-to-east (westerly) winds aloft in both hemispheres, in response to the strong Coriolis effect at high latitudes. Surface winds are easterlies.

3. In the mid-latitudes, surface winds are from west to east (westerlies) in both hemispheres, as poleward-moving winds are turned east by the Coriolis effect.

Is There a Circulation Cell in the Mid-latitudes?

2. Likewise, the rising motion at the equatorward edge of the polar cell (the subpolar lows) would induce rising next to the poleward edge of the mid-latitudes. This rising motion, coupled with the sinking next to the Hadley cell, would logically set up upperlevel circulation over the mid-latitudes, with air moving from the pole toward the tropics. This hypothetical mid-latitude circulation system is known as the Ferrel cell.

3. Descending air near the subtropical highs flows poleward along the surface and is turned toward the east by the Coriolis effect, contributing to the mid-latitude westerlies. Aloft, some rising air at the subpolar lows moves equatorward.

4. However, other factors cause the Ferrel cell to be developed very weakly or not at all. Thermal properties, which result in differences in air density, also dictate whether air will rise. Air on the subtropical side of the Ferrel cell (near 30° latitude) is relatively warm, and so it should be rising, not sinking. Air on the polar side of the cell is colder, and so it should be sinking, not rising. In other words, the thermal effects of the Ferrel cell's warmer air rising and cooler air sinking somewhat offset the dynamic effect of the shear from the adjacent Hadley and polar cells. The result is the near absence of a circulation cell in the mid-latitudes.

What Are Jet Streams and How Do They Form?

1. Jet streams are strong air currents that are long and relatively narrow, resembling a ribbon or tube wrapping around the planet. This figure shows two jet streams: the polar front jet stream and the subtropical jet stream. They are shown for the Northern Hemisphere, but equivalents are also present in corresponding positions in the Southern Hemisphere. The jet streams are typically a few hundred kilometers wide and about 5 km thick, and are located high in the troposphere, near the tropopause. They generally follow paths that curve or meander and can locally split into separate strands that eventually rejoin. The four jet streams all blow from west to east as a result of Earth's rotation.

2. The subtropical jet stream circles around the globe at about 30° latitude (in both hemispheres), near the boundary between the Hadley cell and westerlies aloft in the mid-latitudes. 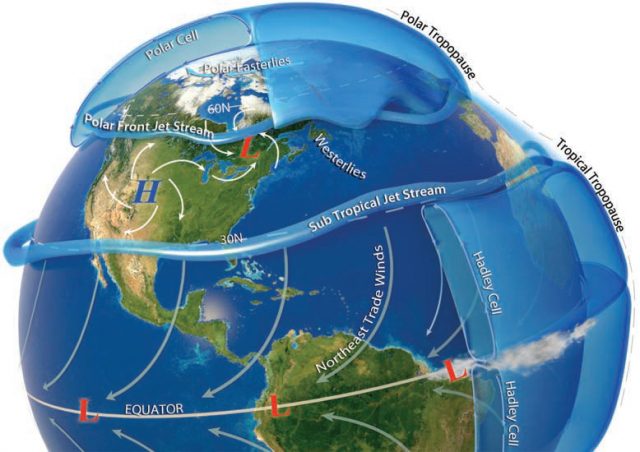 3. In both the north and south hemispheres, the polar front jet stream encircles the globe near the edge of the polar cell. It shifts position north and south from time to time, but typically resides between 45° and 60° latitude. As it shifts farther away from the pole, it brings cold air into the mid-latitudes, like the center of North America.

What Are Rossby Waves and How Do They Relate to Jet Streams?

1. Jet streams do not track around the planet along perfectly circular routes, but instead typically follow more irregular curved paths, like along the thick white line in the polar projection below. These meandering paths, when viewed in three dimensions, resemble curving waves, and are called Rossby waves after the scientist who discovered them. The lines on this map, which is viewed directly down on the North Pole, are isohypses with dark colors showing local areas of low heights (low pressure). Notice that these are concentrated in the subpolar areas.

2. Where the polar jet stream curves toward the pole, this part of the jet stream is called a ridge. Ridges bend poleward.

3. Where the polar jet stream curves away from the pole, we call that type of curve a trough. Troughs bend equatorward. 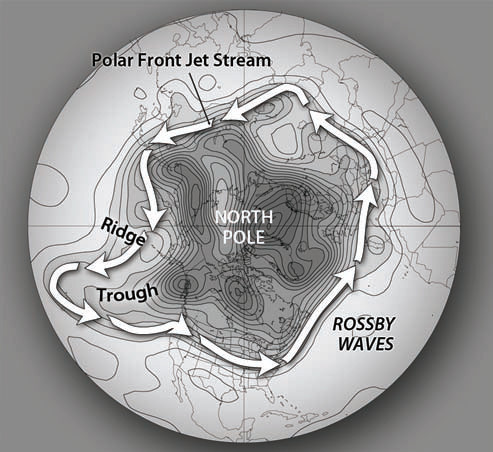 4. The size and position of ridges and troughs is not constant, but changes over days, weeks, and months. Troughs can get “deeper” or “shallower,” while ridges get “stronger” or “weaker.”

5. Bends in the polar jet stream (Rossby waves) have a great influence on weather in nearby parts of the mid-latitudes. When a trough becomes more accentuated and shifts farther away from the pole (i.e., it deepens), it allows cold Arctic air to extend farther away from the pole. Also, as discussed in the weather chapter, Rossby waves influence surface high and low pressures near the polar jet and help strengthen, weaken, and guide mid-latitude cyclones as they migrate across the surface. Accordingly, we return to Rossby waves later.