How Does Air Circulate in High Latitudes?

POLAR REGIONS RECEIVE LITTLE INSOLATION compared to the rest of Earth. As a result, the poles are very cold places, which experience winter darkness for months at a time. Air circulation around the poles reflects this relative lack of solar heating and also the proximity to the axis of rotation for the planet. The encroachment of polar air away from the poles can cause nearby areas to experience very cold temperatures. Airflow away from the poles results in a belt of relatively stormy weather near 45° to 60° N and 45° to 60° S.

1. Examine the large figure below and observe the main features near the poles. Note the circulation directions near the surface and those aloft. After you have made your observations, read the rest of the text.

2. At the surface, winds generally encircle the North Pole, blowing in a clockwise direction when viewed from above the pole. This circulation is driven by the Coriolis effect, which is very strong at these latitudes. A north-polar view of the rotation of the Earth is shown here, where golden arrows show Earth's rotation and light-yellow arrows show surface winds. 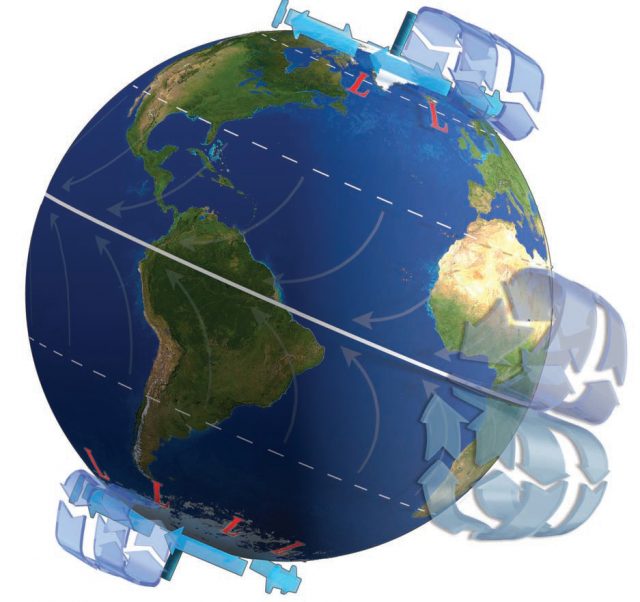 3. Cold, dense air sinks near the North Pole. As it nears the surface, it then flows outward, away from the poles (to the south).

4. The south-flowing air eventually begins to heat up and rise, usually somewhere between 60° and 45° latitude. This rising air causes a series of low-pressure areas at the surface, called the subpolar lows (L on this figure). Once the air rises to its maximum height, the flow turns back to the north, completing a circulating cell of cold air — the polar cell.

5. A similar situation occurs around the South Pole, where surface air circulates around the pole, but in a counterclockwise direction when viewed from below the South Pole. These circular winds from the east, polar easterlies, are in response to the Coriolis effect, which is in turn caused by rotation of the Earth and enhanced by the comparative lack of surface friction with the ocean surfaces that dominate these latitudes.

6. As near the North Pole, cold air flowing away from the South Pole eventually heats up enough to rise, producing a belt of low pressure. The rising air aloft turns south and descends back near the pole, completing the polar cell. The polar cell involves very cold air at such high latitudes, causing the land to largely be covered year-round in ice and snow.

Circulation Around the Poles

1. The very cold air over the poles is so dense that it has a tendency to sink vigorously to the surface, creating high surface pressure — polar highs. The air then moves equatorward, because that is the only direction it can go from the pole.

2. The Coriolis effect is very strong at high latitudes, so the air deflects strongly and circulates around the pole, as shown here for the North Pole. Around the North Pole, the surface winds moving south deflect to the right of their intended path and so blow from the east — they are polar easterlies. 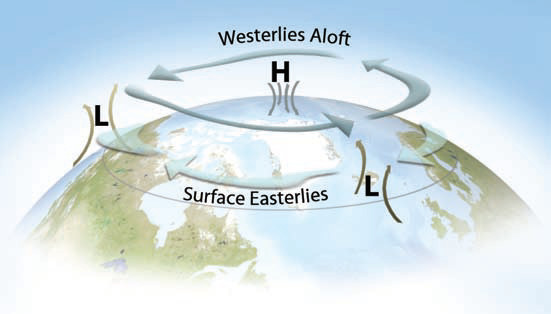 3. As the air flows away from the pole, it warms and rises, producing low surface pressure — subpolar lows. In the winter, the subpolar lows are particularly intense over water bodies because the water is relatively warm at that time of year, relative to air elsewhere at these latitudes. The water warms the air, allowing it to rise.

4. At upper levels, the return flow of air northward toward the pole is also deflected to the right of its intended path (in the Northern Hemisphere). As it is turned to the right, it blows from the west (a westerly flow aloft). So not only is air flowing away from the pole near the surface and toward the pole aloft, the surface and upper-level airflows are rotating in opposite directions (clockwise near the surface, counterclockwise aloft). This is difficult to capture in a single perspective, which is why the polar flow is represented on this page with several figures.

5. The figure below shows the Northern Hemisphere polar cell, as viewed directly down on the North Pole. The slightly faded arrows depict surface flows (easterlies), whereas the brighter arrows show upper-level flow (westerlies). Color gradations on arrows indicate whether air is warming (blue to red from tail to head) or cooling (red to blue).

6. High surface pressure is present at the pole, but shifts slightly in position from season to season. Low-pressure zones (the subpolar lows) occur over the adjacent oceans. The subpolar low in the Atlantic is the Icelandic Low. Another subpolar low, on the opposite side of the North Pole, occurs over the northern Pacific Ocean, and is the Aleutian Low, named for the Aleutian Islands west of mainland Alaska. 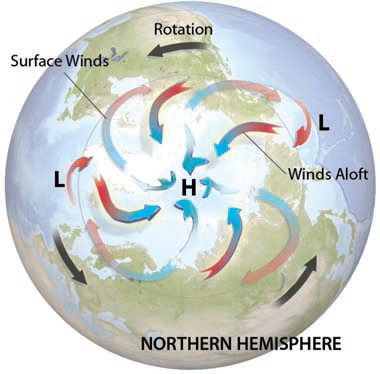 7. The polar cell in the Southern Hemisphere, shown below, is over the South Pole. Unlike the polar cell in the Northern Hemisphere, this one is centered over land — Antarctica. Antarctica is surrounded by uninterrupted oceans. As before, faded arrows show surface flow and brighter ones show airflow aloft. The entire region is a very cold place, so even the air that is shown as warming is still very cold.

8. Surface winds flowing away from the pole are deflected to the left of their intended path, and so circulate counterclockwise around the pole when viewed from below (polar easterlies). Winds aloft move toward the pole and are deflected left of their intended path, flowing clockwise, in the opposite direction from the surface winds. The outward flowing surface air is balanced by the inward flowing air aloft. Low-pressure areas occur over the ocean. 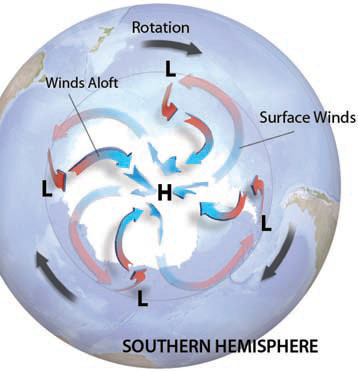 Differences Between the North and South Polar Areas

The general patterns of atmospheric flow are similar for the North and South polar regions, except for the reversed directions of circulation (clockwise versus counterclockwise) related to different deflection directions for the Coriolis effect in the Northern and Southern Hemispheres. One striking difference, however, is the difference between the land-sea distributions around the two poles. The North Pole is over ocean, although this ocean (the Arctic Ocean) is mostly frozen most of the year. The Arctic Ocean is nearly enclosed by the surrounding continents.

In contrast, the South Pole is over land, the frozen continent of Antarctica, and this continent is completely surrounded by open ocean. Differences in the responses of land and water to warming, cooling, and latent heat account for some difference in the specifics, such as having two main low-pressure areas in the oceans adjacent to the north polar region, but a continuous belt of low pressure in the ocean around Antarctica.