How Does Surface Air Circulate in Mid-Latitudes?

THE MID-LATITUDES are regions, in the Northern Hemisphere and Southern Hemisphere, that lie between the tropics (23.5°) and polar circles (66.5°). Air circulation in the mid-latitudes is driven by pressures set up by circulation in the adjacent tropics and polar regions, and by the Coriolis effect. Surface winds within most of the mid-atitudes blow from west to east (westerlies), but the subtropics can have a relative lack of wind.

1. Examine the large figure below and observe the main features in the mid-latitudes, especially the region between 30° and 60° latitude (the dashed lines) in both the Northern and Southern Hemispheres. The mid-latitudes are characterized by distinct seasons and changing weather patterns, and from forested areas to deserts. After observing the features on the large globe and reflecting on implications for weather, read the rest of the text.

2. Cold surface air flowing away from the poles warms and ascends along the poleward edge of the mid-latitudes. This rising air causes storminess and low pressure: the subpolar lows (L on this figure). This rising air is part of the cold polar cell.

3. In the Northern Hemisphere, air from the south flows toward the subpolar lows and away from high pressure in the subtropics (near 30 – 35° latitude). The Coriolis effect is relatively strong in the mid-latitudes and deflects this flow to the right, forming a belt of wind blowing from west to east — the westerlies. 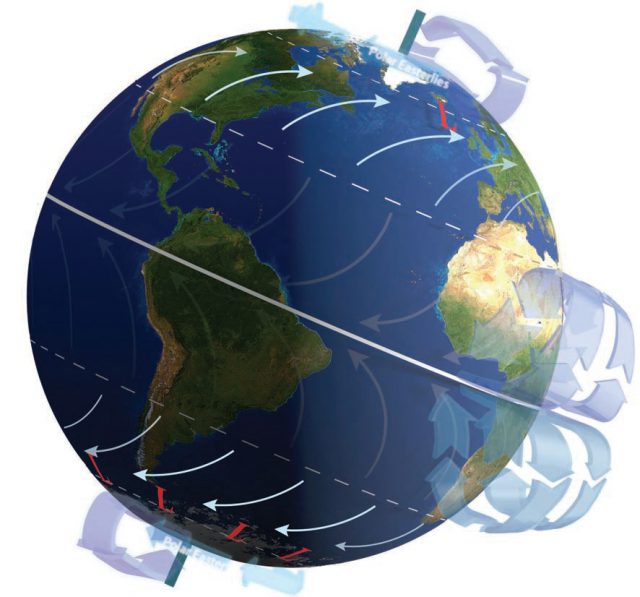 4. Along the edge of the mid-latitudes, in the subtropics, air in the descending limb of the Hadley cell causes high pressure. These regions near 30° N and 30° S — the horse latitudes — can have weeks without wind, which posed a hazard to early sailing ships and their cargo.

5. The top part of the graph below shows how the combination of a northward-directed pressure-gradient force and eastward-directed Coriolis effect results in the westerlies in the Northern Hemisphere. The Coriolis effect strengthens with increasing latitude, turning winds even more to the east as they move north. 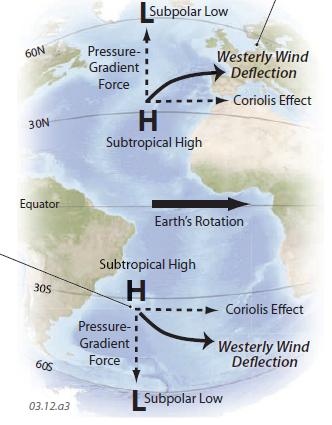 7. The Southern Hemisphere has a belt of low pressure (the subpolar lows) caused by rising air in the polar cell. Air flows toward these lows and away from the subtropical highs, deflecting to the east and becoming westerlies. These westerlies are especially strong (there are no wind-blocking continents) and so are called the roaring forties (between 40° S and 50° S latitude).

Circulation Around Highs and Lows in the Northern Hemisphere

1. In the Northern Hemisphere, high pressure commonly occurs in the subtropics, along the horse latitudes. Winds around the highs are deflected in a clockwise direction by the Coriolis effect. Winds north of the high reinforce the westerlies, whereas winds to the south reinforce the easterly trade winds. As winds spin around the high, they push cold air equatorward and warm air poleward. 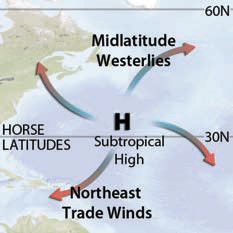 2. Circulation around lows, including subpolar lows, is counterclockwise in the Northern Hemisphere. The subpolar lows reside between polar easterlies to the north and westerlies to the south (in the mid-latitudes). The rising air and shearing between opposite-directed winds causes windy, stormy conditions. 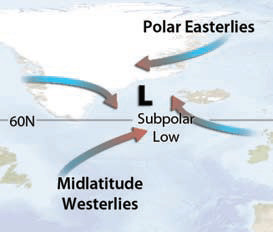 Circulation Around Highs and Lows in the Southern Hemisphere

3. In the Southern Hemisphere, high pressure around the subtropics is accompanied by counterclockwise circulation. The highs are situated between southeast trade winds to the north and westerlies in the mid-latitudes to the south. As in the Northern Hemisphere, circulation around pressure systems redistributes warm and cold air and moisture. 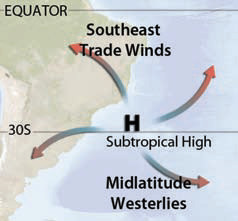 4. Lows in the Southern Hemisphere, such as the subpolar lows, have clockwise circulation around the low. The lows lie between the westerlies and polar easterlies, and this latitudinal belt is extremely windy and stormy. At this latitude there are few large landmasses to disrupt the winds. 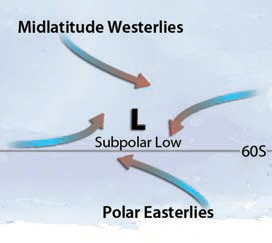 Migration of Pressure Areas in the Mid-Latitude

5. Embedded within the mid-latitude westerlies are traveling, spinning circulations of high and low pressure, much like a swirling flow that is embedded within the overall current in a stream. The four figures here show the movement of a high-pressure area (an anticyclone) guided by the mid-latitude westerlies. Anticyclones generally move equatorward as they migrate eastward, as shown in this series of daily images. Traveling low-pressure systems called cyclones, not shown here, tend to move poleward as they travel from west to east across the mid-latitudes; they are associated with stormy weather. As either type of pressure migrates through an area, it causes the wind direction to change relatively suddenly. As a result, wind and other weather patterns change more quickly in the mid-latitudes than in any other part of the Earth. 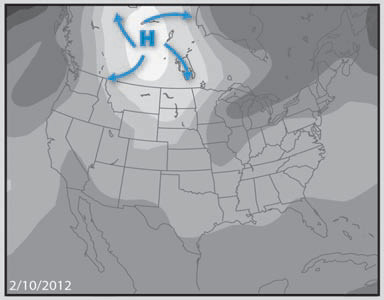 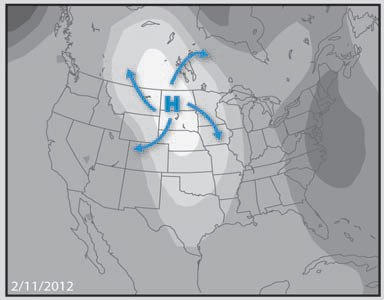 6. Note how the winds change in any area across which the pressure area migrates. In the case shown here, an area has northwesterly winds as the high pressure approaches from the northwest, followed by southeast winds once the high has passed to the east. 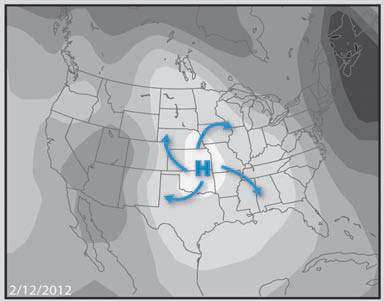 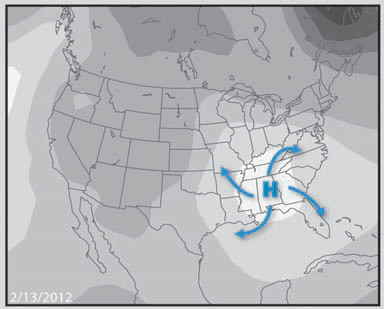