What Are the Settings of Mid-Latitude Climates?

NON-ARID, MID-LATITUDE CLIMATES tend to experience a relatively even distribution of precipitation year-round. Some are dominated by maritime air masses that moderate temperature swings and result in relatively mild winters and summers; they are within Group C in the Koppen designation. Other mid-latitude climates impart more severe winters because they are dominated by continental air masses, and these fall into the D classification. Mid-latitude regions are affected by westerlies, and precipitation patterns reflect the role of mid-latitude cyclones.

Where Are Marine West Coast and Humid Continental Climates Found?

The globes below portray the distributions of three mid-latitude climate types — Marine West Coast climate (Cfb and Cfc), Humid Continental climate (Dfa and Dfb), and Continental Monsoon climate (Dwa and Dwb). As you can observe, most are in cold places.

The Marine West Coast climates (Cfb and Cfc) occur over or near oceans at moderately high latitudes, like Canada. An abundant supply of moisture provides precipitation throughout the year. The influence of the ocean means that summers are warm (Cfb) or cool (Cfc), and winters are cold but not severe. Such climates occur in northern and southern parts of oceans and across most of western Europe. 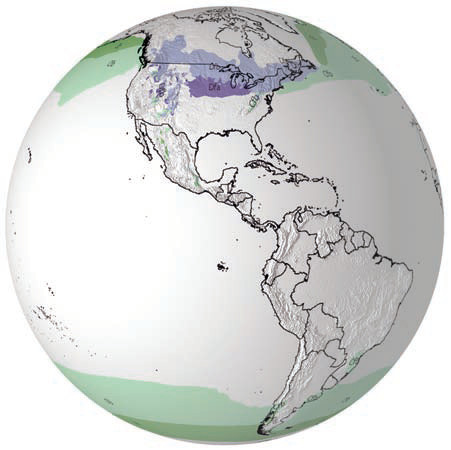 Humid Continental climates (Dfa and Dfb) occupy the interior of continents, but only in the Northern Hemisphere — southern continents are not wide enough at these latitudes to allow these climates. Humid Continental climates are wet year-round and feature hot (Dfa) or warm (Dfb) summers but long and cold (Dfa) to severe (Dfb) winters. They are the climates of southern Russia and the upper Midwest and Great Lakes Region of the U.S. 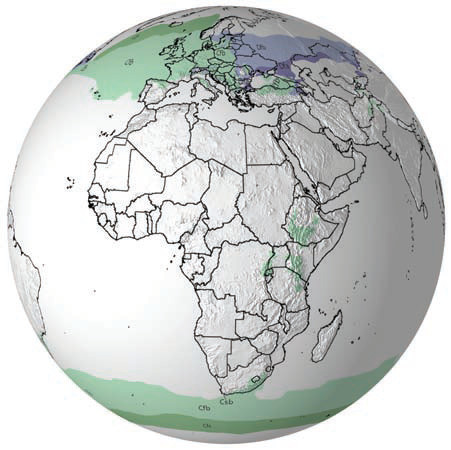 Continental Monsoon climates (Dwa and Dwb) are very restricted in distribution, occurring mostly in Asia, in the interior of China and north of the Korean Peninsula. In both locations, precipitation varies greatly during the year, partly because of nearby monsoons. As the name implies, Dwb climates have dry winters and warm, wet summers. A similar climate (Dwa; not shown) occurs farther south and has hot (not warm) summers. 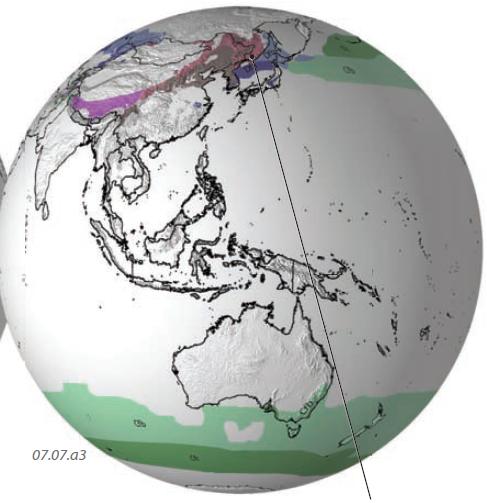 Mid-latitude climates experience long days in summer and short ones in winter. The influence of the ocean causes marine climates ( Cfb and Cfc) to have less seasonality in temperatures than continental ones. 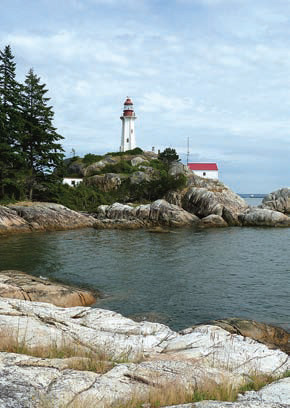 Humid Continental climates are wet year-round, but they are farther from any oceanic influences and so are more seasonal, experiencing warm or hot summers but much colder winters. 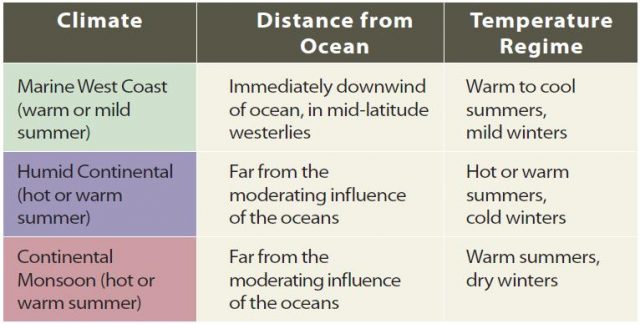 1. The two mid-latitude marine climates (Cfb and Cfc) are either over relatively cool oceans or over land areas where winds bring oceanic air across a continent, as in western Europe. Even though the subtropical anticyclones are far away, they still make their nearest approach to these regions in the summer and suppress precipitation somewhat, particularly on the southern fringes of the Marine West Coast climate. As a result, precipitation tends to peak in October (when the oceans are warmest) and December (when the subtropical high is farthest away) in Northern Hemisphere areas under these two marine climates.

2. Humid Continental climates receive precipitation throughout the year, including snow in the colder months. Summers are somewhat wetter than the rest of the year in most Humid Continental climates because of convective thunderstorms on hot summer afternoons and the high water-vapor capacity in warm air. In North America, the clockwise flow of Gulf of Mexico moisture around the expanded Bermuda-Azores High adds to the summer precipitation potential. In winter, the combination of moisture from the Great Lakes and bitter cold air results in heavy snowfall (lake-effect snows) on lands downwind of the lakes.

Influence of the Westerlies

3. The mid-latitude westerlies, including the polar front jet stream (shown here in idealized form), push maritime polar air masses from the Atlantic deep into the interior of Europe. This is possible in part because south of Scotland, Europe lacks north-south-oriented mountain ranges to confine the moist air to the coastal zones. As a result, most of northwestern Europe is in a Marine West Coast climate (Cfb). 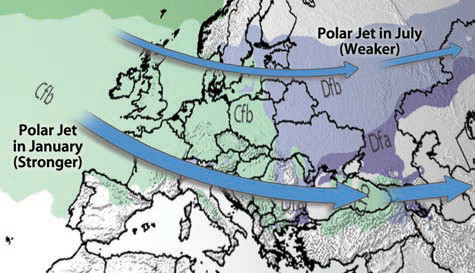 5. The east-west oriented Alps often prevent Arctic and polar air masses from reaching southern Europe. Nothing prevents such air masses from penetrating farther southward in eastern Europe, so the Humid Continental climates extend farther south. Mid-latitude cyclones that occur over these continentalclimate areas produce less precipitation because of the increased distance from the source of moisture (i.e., the Atlantic Ocean and Mediterranean Sea).