What Conditions Cause Arid Climates?

ARID CLIMATES OCCUPY a greater portion of Earth’s land surface than any other climate category. They comprise Group B in the Koppen classification and are subdivided into desert climates and steppe climates, with the distinction being that deserts are more arid than steppes. Deserts and Steppes are further subclassified into hot or cold categories — not all deserts or steppes are hot! In the Koppen classification of Group B climates, potential evapotranspiration is taken into account, in addition to precipitation; an area is classified as arid only if precipitation does not offset the potential loss of water through evaporation and transpiration through leaf surfaces.

Where Are the Various Types of Arid Climates?

A Hot Desert climate (BWh) covers huge areas of Africa (e.g., Sahara), the Arabian Peninsula, the interior of Australia, and parts of the American Southwest. It also extends over large areas of subtropical ocean. 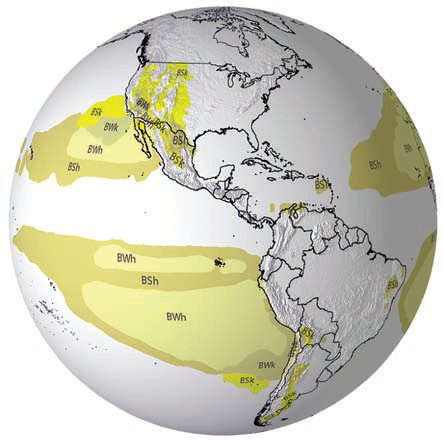 A Cold Desert climate (BWk) is less common, occurring mostly in the interior of Asia (like southern Mongolia) and near cold ocean currents, like the Humboldt Current off the west coast of South America, as shown here.

Hot Steppe climates (BSh) generally surround the hot deserts and represent transition areas to more humid climates, as across the Sahel region south of the Sahara and north and east of the hot deserts of Australia. 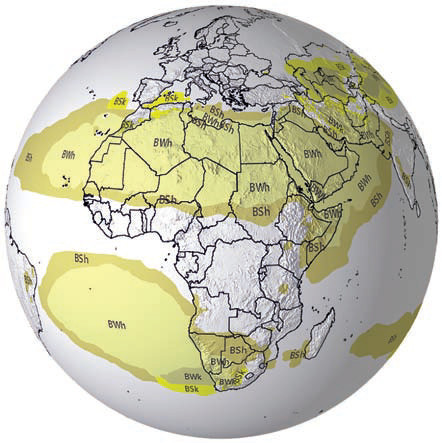 Cold Steppes (BSk) are abundant along the Great Plains and western interior of North America, in Tibet and other parts of central Asia, and in southern Australia. They cover relatively small parts of the ocean. 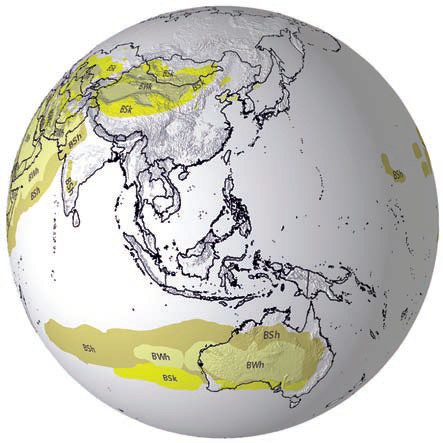 What Controls Temperatures in Arid Climates?

1. Most deserts, like those in the American Southwest, are in subtropical regions, where the noon Sun is generally high, so insolation arrives nearly perpendicular to the surface. At the latitudes of most arid climates, the noontime Sun is high for several consecutive months. 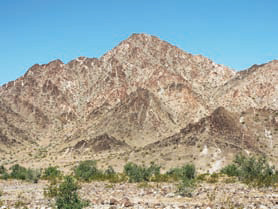 2. Many, but not all, arid climates lack clouds and precipitation for much of the year. If there is little humidity, insolation is transmitted through the atmosphere with a minimum amount being absorbed in the atmosphere before it reaches the surface, promoting warm days. 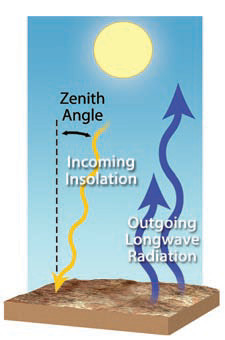 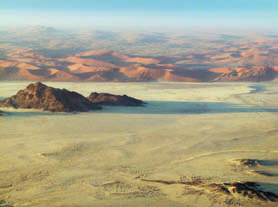 4. Cold Steppe (BSk) and Cold Desert (BWk) climates have the relative dryness of their hot counterparts, but have lower temperatures, like in Tibet and Mongolia. Tibet is cold because it has high elevations, averaging 4,500 m (about 14,800 ft). The limited amount of precipitation relative to potential evapotranspiration produces a characteristic sparseness of plants. 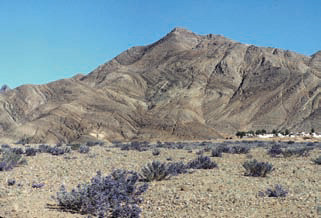 What Factors Contribute to the Lack of Precipitation in Arid Climates?

Descending Air Along the Subtropics

The main cause of deserts and other arid areas is their position along the subtropics, where the descending limb of the Hadley cell brings dry air and high pressure. Note how the arid lands in the Sahara and the Arabian Peninsula form an east-west band along subtropical latitudes, a manifestation of the Hadley-caused high pressure. The descending air generally means that even if the air is humid, it cannot rise easily. Arid lands of Australia and the American Southwest occupy similar subtropical settings.

Other desert climate areas (BWh and BWk) and steppe climate areas (BSh and BSk) owe their existence partly or mostly to their proximity to cold ocean currents, which limit the amount of moisture in the air and promote atmospheric stability. One such area is the Namib Desert of southwest Africa, adjacent to the cold Benguela Current (coming from nearer Antarctica). Another is the Atacama Desert along the southwest coast of South America, beside the cold Humboldt Current. 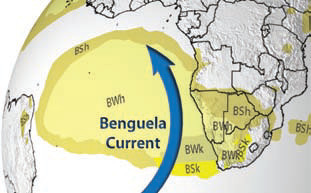 An area can be dry because it is in the rain shadow of a mountain range. Southern and western sides of the Hawaiian Islands are on the rain-shadow side of the mountains. Moist air transported by the northeast trades moves up the northern and eastern slopes, causing heavy rain on those sides, but drying out the western, downwind sides. 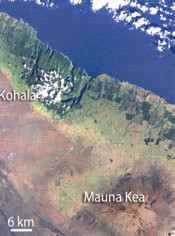 Many arid (Group B) areas are dry because they are in the interior of a continent, far from oceanic moisture sources, as in the case of the western interior of the U.S.; they are also in the rain shadow of mountains along the West Coast. 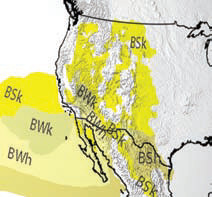 What Are Some Examples of Climate Conditions in Arid Climates?

The climographs below convey temperatures (the lines) and precipitation (bar graphs) in areas designated Group B (desert and steppe climates). As we might expect, precipitation totals are very small, and what falls evaporates quickly in the dry air, leaving a parched landscape.

Khartoum is an example of a hot desert in the subtropics. The region receives essentially no rain for most of the year. The meager July–August rains result from a slight influence of the northern edge of the ITCZ. Khartoum is near the tropics, so its temperature seasonality is dampened and temperatures remain high, showing limited range. 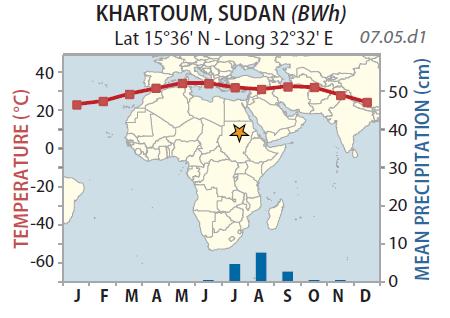 Few people live in the world’s cold deserts. This town in China lies on the fringe of the desert/steppe ecotone. Temperatures vary markedly and are very cold during the winter, but precipitation is relatively low. Most cold deserts have even less precipitation than shown here. 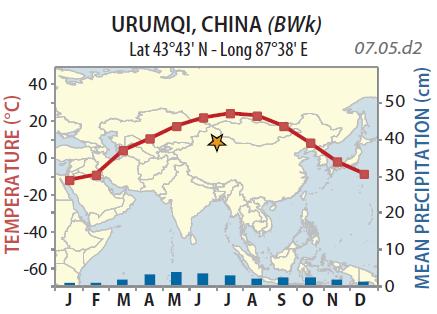 Steppe climates are more abundant and far more heavily populated than deserts. They are transition zones between desert climates and more humid climates. Precipitation in such environments is variable from year to year, with some years receiving desert-like precipitation totals and others experiencing precipitation more characteristic of humid climates. Like natural vegetation, human populations in these regions must be able to adapt to periodic dry spells and severe water shortages. 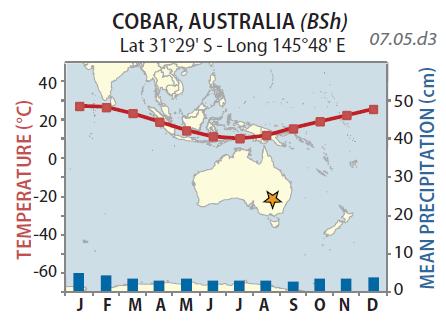 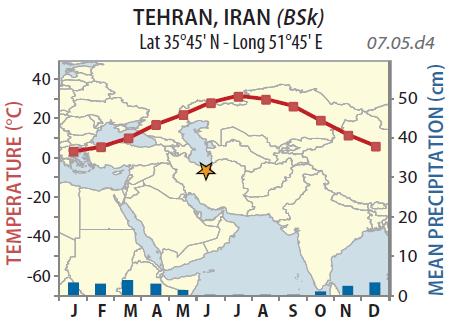