What Oceanic and Atmospheric Patterns Are Predicted for a Newly Discovered Planet?

PLANET W is a newly discovered planet that is similar to Earth. It has oceans, an atmosphere very similar to Earth's, and ice at both poles. Since no astronaut has yet ventured to the planet, we currently only know things we can observe from a distance, specifically the physical geography — the distribution of land, oceans, and sea ice, as well as the larger features on land. To guide future expeditions, you will use the known physical geography to predict the global patterns of wind, ocean currents, and atmosphere-ocean-cryosphere interactions.

Follow the steps below, entering your answers for each step in the appropriate place on the worksheet or online.

Your instructor may also have you complete the following steps. Complete your answers on a sheet of graph paper.

6. Draw four cross sections across the central ocean, extending from one side of the globe to the other. Of these cross sections, draw one in an east-west direction across each of the following zones: (1) between the equator and 30° (N or S); (2) within a zone of westerlies (N or S); and (3) within the south polar zone, south of 60° S. The fourth cross section can be drawn at any location and in any direction, but it should depict some aspect of the oceanic and atmospheric circulation that is not fully captured by the other cross sections. On each cross section, draw the surface wind patterns, zones of rising or sinking air, and possible geometries of a Walker cell or other type of circulation, where appropriate. Be prepared to discuss your observations and interpretations.

7. Draw a north-south cross section through the oceans, showing shallow and deep flows that could link up into a thermohaline conveyor. Describe how this might influence the climate of the entire planet and what might happen if this system stops working.

Some Important Observations About the Planet 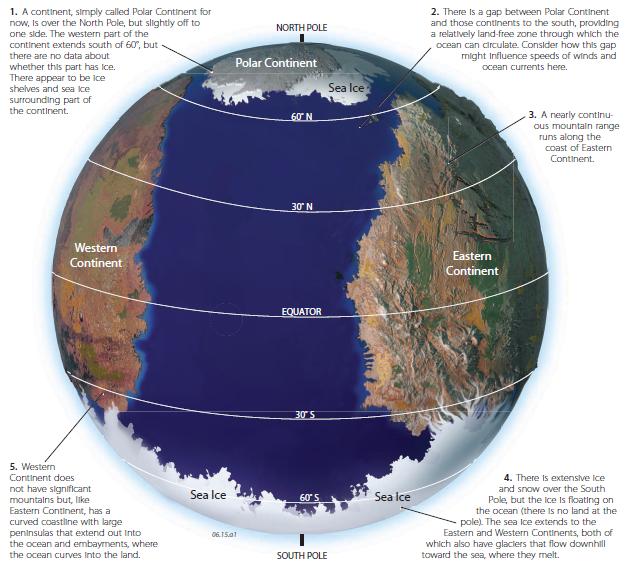 1. A continent, simply called Polar Continent for now, is over the North Pole, but slightly off to one side. The western part of the continent extends south of 60°, but there are no data about whether this part has ice. There appear to be ice shelves and sea ice surrounding part of the continent.

2. There is a gap between Polar Continent and those continents to the south, providing a relatively land-free zone through which the ocean can circulate. Consider how this gap might influence speeds of winds and ocean currents here.

3. A nearly continuous mountain range runs along the coast of Eastern Continent.

4. There is extensive ice and snow over the South Pole, but the ice is floating on the ocean (there is no land at the pole). The sea ice extends to the Eastern and Western Continents, both of which also have glaciers that flow downhill toward the sea, where they melt.

5. Western Continent does not have significant mountains but, like Eastern Continent, has a curved coastline with large peninsulas that extend out into the ocean and embayments, where the ocean curves into the land.