Do Impacts of ENSO Reach Beyond the Tropics?

WHILE THE IMMEDIATE IMPACTS OF ENSO are restricted to regions near the equatorial Pacific, shifts between different phases of ENSO cause climate variability well beyond the equator and the Pacific. When atmospheric conditions in one region affect a distant region, these distant associations are called teleconnections, which in this case are caused by interactions with the subtropical and polar front jet streams.

What Is the Connection Between the Equatorial Warm Pool and the Extra-Tropics?

The effects of an ENSO can spread out of the tropics because air near the equator rises and flows northward as part of the Hadley cell. Motions in the Walker and Hadley cells occur simultaneously, so equatorial air can be incorporated into both circulation cells, spreading ENSO effects to distant parts of the globe (a teleconnection). To explore how this teleconnection operates, we follow a packet of the warm air that was produced in the Western Pacific Warm Pool during a cold-phase (La Nina) event. Begin reading on the lower left.

1. During a La Nina phase, excess warm water accumulates in the Western Pacific Warm Pool. As this excess energy transfers from the ocean to the atmosphere, convection begins to carry the warm, moist air upward.

2. When the rising air reaches the upper levels of the troposphere, it is transported poleward in the Hadley cell. It has an apparent deflection to the right (due to the Coriolis effect) and becomes part of the rapidly eastward-moving subtropical jet stream. Eventually, the air descends in the subtropics near 30° N latitude. 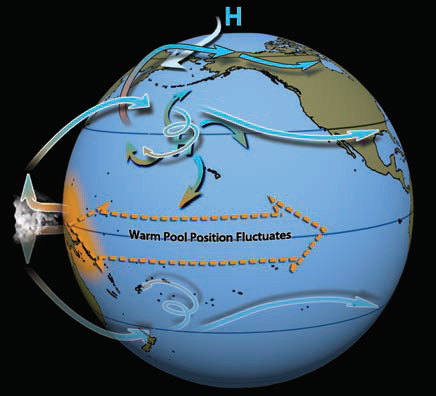 3. Warmer air flowing poleward from the subtropics is forced to rise over the cold polar air, along the polar front. This poleward-moving air also has an apparent deflection to its right (in the Northern Hemisphere), joining the rapidly east-flowing polar front jet stream.

4. The different phases of ENSO are distinguished by the position of the western warm pool (west for La Nina, farther east for El Nino). As this position changes, moist tropical air is fed into the jet streams in different locations along their paths, affecting the subtropical and polar jets, particularly “downstream” (east) in the jet streams (in both hemispheres). Rising air from the warm pools also flows south into the Southern Hemisphere, affecting weather there as well.

ENSO and Patterns of Atmospheric Pressure

During a warm phase (El Nino), areas of higher than normal pressure are typically centered over Hudson Bay, the northcentral Pacific, southwestern Europe, and western Africa.

At the same time, lower than normal pressures form in the eastern Pacific, Mexico, and across the southern U.S. 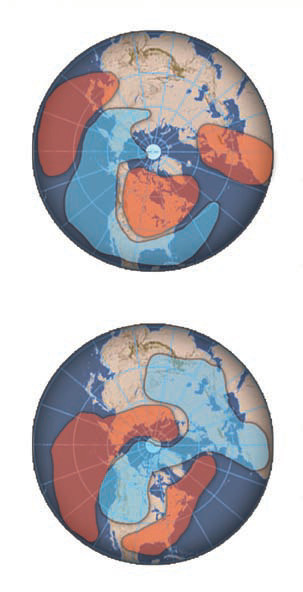 During a cold phase (La Nina), the patterns of atmospheric pressure are nearly reversed from those of an El Nino. Lower than normal pressures extend across much of southern Europe, Greenland, and western North America.

During a La Nina, higher than normal atmospheric pressures are situated along the East Coast of the U.S. and cover most of the eastern Pacific. Recall that high pressure is associated with dry, sinking, commonly cool air, whereas low pressure is associated with rising air and unsettled weather. We would predict such conditions in the red (high-pressure) and blue (low-pressure) areas on these maps.

The polar front and subtropical jet streams flow in a continuously changing wave-form around the globe, with the positions of the waves governed by locations of high and low pressure. Changes in the strength and location of the global pressure cells, as occur during ENSO events, therefore modify the usual pattern of the jet streams. The jet streams in turn control the typical paths of weather-generated storms and other weather patterns on the surface of the Earth. 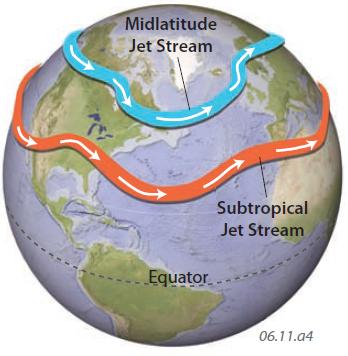 What Are the Typical Responses to ENSO Around the Pacific Basin?

ENSO greatly affects weather conditions over the Pacific and in adjacent continents. The four maps below summarize the weather conditions that result from ENSO during summer and winter. Note that due to the increased energy gradient between the equator and the poles during winter, the “winter” hemisphere frequently shows greater changes with respect to the phase of ENSO than the “summer” hemisphere.

1. During the warm (El Nino) phase, a weakening of the Walker cell and easterlies (trade winds) shifts the Pacific warm pool eastward and limits upwelling next to South America.

2. As the warm pool shifts eastward, dry conditions spread across the far western Pacific (yellow). If prolonged, these conditions cause drought in this area.

3. The locus of precipitation follows the warm pool into the middle of the Pacific. The weakened easterlies also allow more December–January precipitation along the western coast of South America. 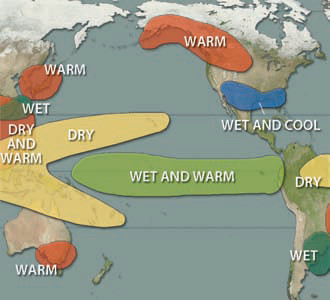 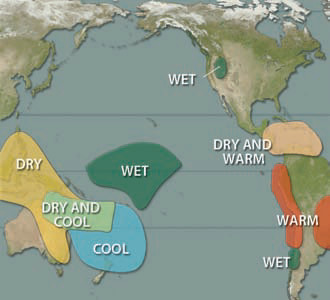 7. The position of the southern subtropical jet stream controls the paths of precipitation-bearing frontal systems in the mid-latitudes of the Southern Hemisphere. Central Chile is most sensitive to shifts in the passage of these winter storms. The quantity of snow falling in the Andes controls water available for irrigation in Chilean and Argentinian rivers during the next dry summer season.

8. During December–January of a cold (La Nina) phase, the Walker cell and easterlies intensify, pushing warm water westward into the Western Pacific Warm Pool, leading to wet conditions across that region.

9. The westward ocean currents cause upwelling along the western coast of South America. The presence of cold waters in the eastern equatorial Pacific causes dry and cool conditions there. The position and intensity of the ITCZ changes, affecting the strength of trade winds, regional precipitation, and tropical storms in the Caribbean region. 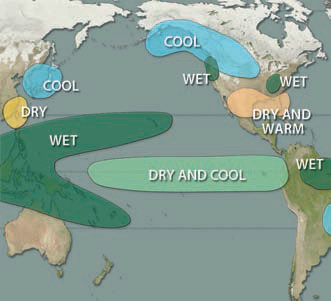 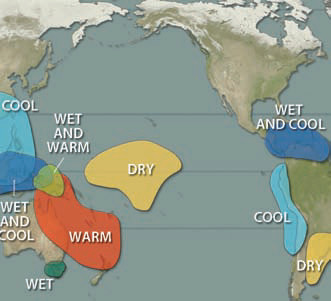 10. Effects of La Nina are abundant in North America. These include cooler and wetter than normal conditions next to the Gulf of Alaska, but dry and warm conditions in the southeast U.S.

11. In July and August during La Nina, the western Pacific is warm and wet because of the presence of an extensive and strong warm pool. The central Pacific stays relatively dry. The appearance of excessively cold water cools the coast during the southern winter, decreasing rainfall along much of the west coast of South America.

12. In the Polynesian Islands and northeastern Australia, warm, moist equatorial air clashes with cooler sub-Antarctic air along a northwest-southeast zone (shown in orange). Changes in the strength of the subtropical pressures shift this precipitation back and forth like a large door hinged over northeastern Australia.