How Does the Climate System Sustain Life?

GLOBAL ENERGY, HYDROLOGIC SYSTEMS, AND BIOLOGIC SYSTEMS are interdependent, linked by processes, like photosynthesis, evapotranspiration, and albedo, through a system of complicated feedbacks. How does the climate stay at conditions favorable for life, despite the fact that it is always changing? Alternatively, can the biosphere help sustain a favorable environment through such self-regulating processes? This possibility is demonstrated in an Earth-like planet populated only by black or white daisies — Daisy World. Daisy World illustrates the connections between various components of the climate, including life.

How Are Energy, Water, and Plants Linked in Daisy World?

On this hypothetical planet, Daisy World, there are two kinds of daisies — white daisies and black daisies. The black daisies have a low albedo, so they absorb more insolation than do white ones. In hot or bright conditions, however, the dark color is a disadvantage because the black daisies retain so much insolation that they overheat. The white daisies reflect more insolation, and so they do better in hot environments, but not as well in cold ones (they do not get enough energy). There are no “daisy-eaters,” so the relative survival rates of the two daisies depend only on how they interact with the climate. 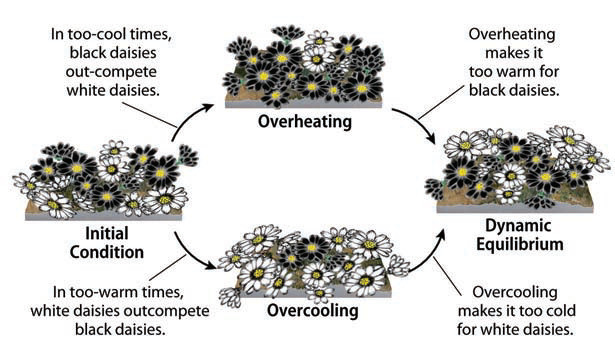 After observing the setup of Daisy World, examine the figure below, which illustrates how energy, water, and the daisies interact to keep the climate within certain bounds of temperature and water vapor. The letter and number on each arrow references text adjacent to the figure. E arrows involve energy, W involve water, and B refers to the biosphere (daisies). Refer to chapters 2, 3, and 4 to review key topics discussed below.

E1. Insolation is identical in quantity and quality to that of Earth.

E2. Cloud albedo is similar to that on Earth, which ranges from 50% to 70%. The area of clouds varies, and is generated by the planetary water subsystem.

E3. The proportion of insolation reflected to space by clouds depends on the type and extent of clouds, which are controlled by the water subsystem.

E4. Insolation not reflected by clouds proceeds down toward the planetary surface.

E5. The surface is determined by planetary land cover (biosphere). The surface reflects a proportion of incident insolation back to space.

E6. Total energy absorbed by the biosphere is the sum of insolation (E5) and the re-radiated longwave radiation called counterradiation (E10).

E8. Energy that does not leave via planetary albedo must exit as longwave radiation, controlled by the temperature of the planet and the efficiency at which emission occurs for the gas.

E9. Water vapor (water subsystem) is the only greenhouse gas. Its quantity (clouds) therefore controls temperatures at the base of the clouds.

E10. Longwave radiation is radiated back to the surface by the atmosphere. 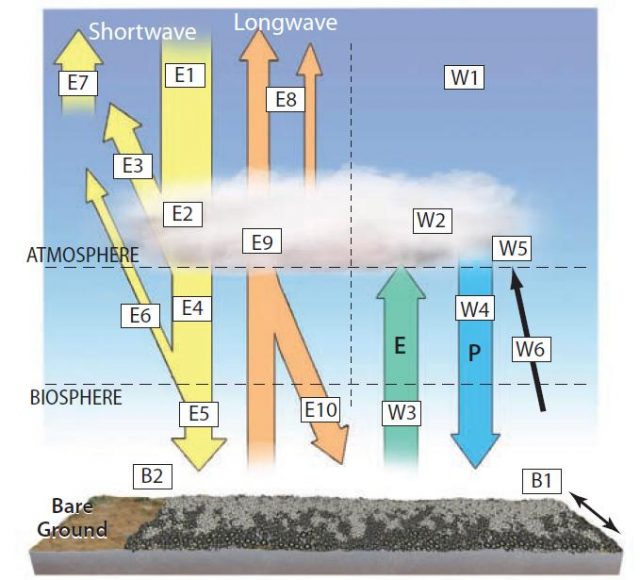 W1. Like Earth, Daisy World is considered to be a closed system with respect to water, so no water leaves across the planetary boundary.

W2. Cloud cover is a function of the water vapor stored in the atmosphere (controlled by temperature and the energy subsystem), and the imbalance between evaporation inputs and precipitation outputs. When Precipitation (P) < Evaporation (E) cloud cover grows; when P > E cloud cover shrinks.

W3. Evaporation is driven by latent heat flux (governed by the energy and biosphere sub-systems), and by the quantity of water already in the atmosphere.

W4. Precipitation is positively related to cloud cover and based on the average precipitation on Earth of 1,000 mm.

W5. Temperature at the cloud base, which controls E10, is governed by surface temperature (biosphere subsystem) and the adiabatic lapse rate.

W6. In reality, the adiabatic lapse rate is controlled by moisture content, defined by the planetary cloud cover.

B1. Black and white daisies share a constant mortality rate. Growth rates decline as temperatures above each daisy type diverge from a common optimum. In this way, the areas occupied by the two shades of daisy change with changes in the energy and water subsystems.

B2. Planetary surface temperature is a combination of temperatures over bare ground and black and white daisies, proportional to their planetary areas and albedos. Temperature rises as the number of black daisies increases, and vice versa.

How Do Biophysical Features on Daisy World Interact?

Variables in Daisy World — and on Earth — all interact with, and adjust to, one other. Some adjustments are almost instantaneous on an annual scale, like changes in planetary albedo, while other linkages, such as the daisy growth rate, take time to fully impact the system. This diagram illustrates some of the ways in which Daisy World could evolve through time, through positive and negative feedbacks between energy, water, and biology. In many natural systems the variables are constantly adjusting to one another because of time lags between the input and response.

Constraints to the Model

2. Planetary temperatures tend toward those associated with the prevailing daisy type (warmer over black daisies), although some of the planet is covered by bare ground.

3. As temperatures above each daisy type approach or diverge from the optimum (22.5°C here), growth rates increase or decrease.

4. Mortality rates of both daisies remain fixed, thus proportions of the planet covered by each daisy do not change instantaneously. However, there is an accelerated changeover from white to black daisies as higher temperature above black daisies approaches the optimum, while temperatures above white daisies are getting colder, diverging from the optimum.

6. Suppose that an area has a higher proportion of black daisies. What do you think will happen to temperature and atmospheric moisture in this scenario?

7. The black daisies have a lower albedo, so they reflect less insolation back to space and retain more of the energy, heating up the surface. A warmer planet leads to more evaporation, more water vapor in the air, more clouds, a more active hydrologic cycle, and a higher proportion of the planet covered in clouds.

8. Greater cloudiness increases planetary albedo and reduces the insolation reaching the daisies. However, water vapor is a greenhouse gas, thus the presence of additional cloud cover, while increasing global albedo, also restricts cooling from the loss of outgoing longwave radiation. 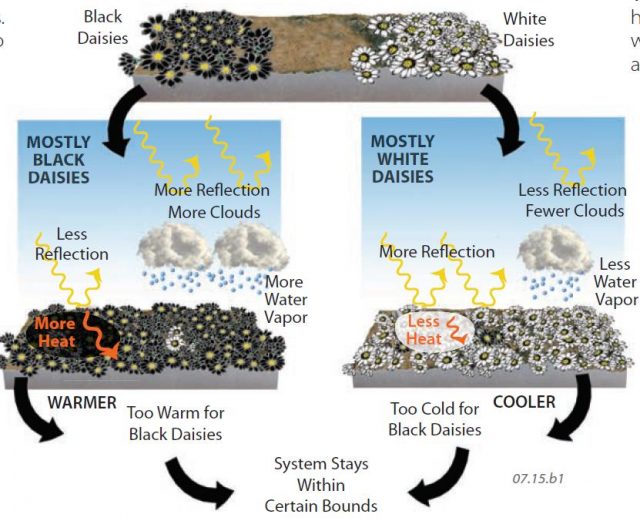 9. Eventually, the planet may get too hot for the heat-absorbing black daisies, so more black daisies die, causing the planet to cool, which then favors the white daisies.

10. Suppose instead that an area has a higher proportion of white daisies. Predict what will happen to temperatures and atmospheric moisture in this scenario.

11. The white daisies have a higher albedo, so they reflect more insolation back to space, retaining less of the energy. This causes the surface to cool. A cooler planet has less evaporation, less water vapor, fewer clouds, and a less active hydrologic cycle. Less of the planet is covered in clouds, and there is less heat-trapping greenhouse gas. The proportion of white daisies continues to grow.

12. Following the peak abundance of white daisies, the high surface albedo (white daisies) and other factors cause a decrease in temperatures, decreasing the abundance of warm-adapted white daisies. At this point, the growth rate of white daisies declines at an ever-increasing rate, while that of the black daisies grows. A repetition of the cycle has then been initiated. Does Earth function in a similar way, with positive and negative feedbacks that keep the systems within certain bounds? We hope so!