How Do We Use Computers to Study Climate Change?

COMPUTER MODELS are used to investigate issues related to climate, like global warming. The simplest climate models compute energy (temperature), water, or momentum for a small area over a limited time. The most complicated models use numerical methods and principles of physics to compute atmospheric conditions at many vertical levels across the entire Earth, for a long period of time. These are called general circulation models (GCMs). GCMs and weather forecasting models share many similarities, but they also have some important differences.

What Are GCMs and How Do They Approach Climate Problems?

1. As in weather forecasting models, data are collected from a variety of sources, including aircraft, satellite imagery, balloon launches, and surface stations.

3. Equations are run to simulate atmospheric variables at each point for a set time into the future.

4. The “answer” at each grid point becomes the starting point for the next iteration of calculations for another time into the future.

5. After a prediction far enough into the future is generated, the results are scrutinized and plotted on maps. 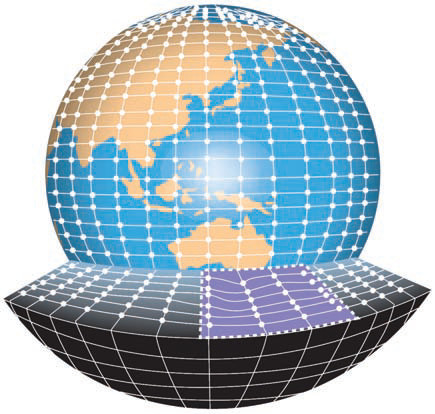 6. The same general data sources are used for climate prediction as for weather forecasting. However, because small-scale weather features can create quite a bit of havoc on short time scales, it is generally more important to have a finer mesh of data for weather forecasting models. Both types of models are generally so complicated that they are run on supercomputers or clusters of networked, high-powered computers.

7. Spatial analysis techniques are used to interpolate the data to a three-dimensional grid, with several vertical levels. The gridded data are run through the model, using the same seven basic equations that are used in weather forecasting models.

8. As in weather forecasting models, spectral models may be used. These use grid points initially, but then resolve atmospheric motion into a series of sine and cosine waves, which then become amplified or dampened based on the input of energy, matter, and momentum. The results of the spectral analysis then become re-interpolated to a grid.

What Are Feedbacks and How Are They Typically Represented in GCMs?

Among the most important — and complicated — aspects of global climate models are feedbacks. A feedback is the way a system responds to a change in conditions, which in turn acts to amplify or dampen that change. Most climate scientists would agree that feedbacks are among the least understood parts of the global climate system.

1. These two figures were presented and discussed in chapter 1, but they provide a useful review of feedbacks in the context of modeling. The left figure illustrates that we can think of natural phenomena as systems, containing matter and energy, with individual parts that interact in
some ways more than others. In studying and modeling a system, we want to understand the inputs to some part of the system, in this case the input of moisture into the atmosphere from the water and ice (shown by the upward arrows). Then, we want to model, using physical principles, the response of the system, such as to increased precipitation. 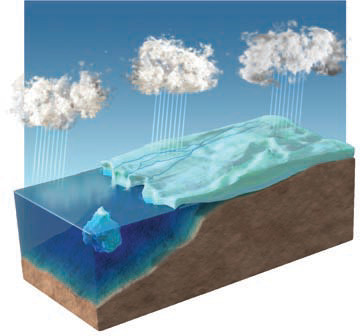 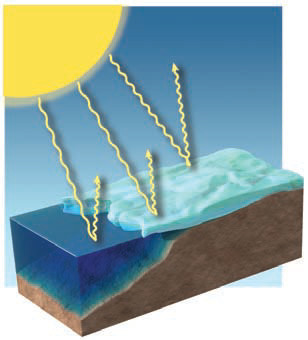 What Are Some Positive and Negative Feedbacks in the Climate System?

GCMs consider feedbacks, but they are difficult to understand and model because a chain reaction of effects may result from a single change. Shown below are some important feedbacks modeled in modern GCMs. Some of these feedbacks are not as straightforward, nor as well understood, as these simple figures imply.

Changes to the Surface 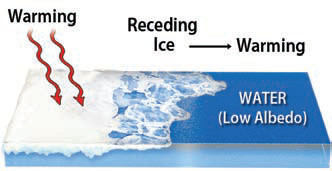 1. Warming temperatures could melt more ice. Ice has a higher albedo than water, so replacing ice with water causes the surface to absorb more heat, causing even more warming in a positive feedback. 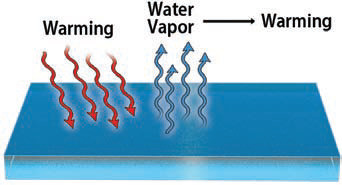 3. Warming the oceans evaporates more water, the most abundant greenhouse gas. The extra water vapor could cause more warming by absorbing outgoing longwave radiation, which could evaporate more water vapor, which . . . you get the idea. 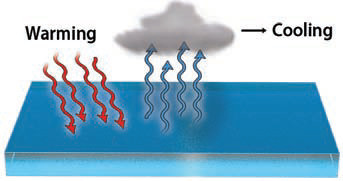 CO2 In and Out of the Oceans 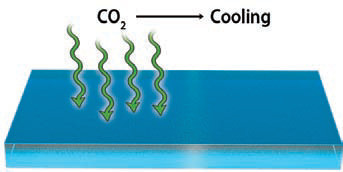 5. Carbon dioxide (CO2) goes in and out of the oceans, which hold over 50 times more CO2 than the atmosphere. Any CO2 emitted into the atmosphere that goes into the oceans reduces the rate of atmospheric warming. 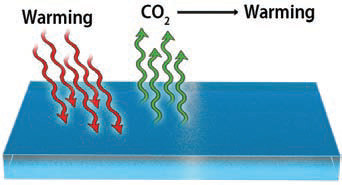 6. If the oceans warm, however, CO2 in the oceans may eventually be released back to the atmosphere through other processes, leading to more warming, a positive feedback.

Development of GCMs and How They Differ from Weather Forecasting Models

In GCMs, complex subsystems and feedbacks interact with the main model, which is keeping track of numerous variables in three-dimensional space over many iterations (time steps). The job is too much for a single person, so researchers collaborate in research groups that design, run, and refine GCMs. Groups known for their GCMs include: (1) the UK Hadley Centre, whose model is known for its emphasis and accuracy in modeling atmosphere-ocean interactions; (2) the National Center for Atmospheric Research (NCAR), whose Community Earth System Model includes four separate models that each simulate different parts of the Earthocean-atmosphere system and are coupled together; (3) 20 European countries collaborate in producing the European Centre for Medium-range Weather Forecasting (ECMWF) model, which is known for producing medium-range weather forecasts and seasonal climate forecasts; and (4) the Canadian Centre for Climate Modeling and Analysis (CCCMA), which produces a suite of atmosphere-ocean-coupled models. Scientists commonly compare the results from these different GCMs where appropriate.

Some smaller nations have built their own GCMs in recent years. These models tell policymakers the likely impacts of treaties and policy changes on the global atmospheric environment. Each nation wants to ensure that policy driven by concern for global climatic change will maximize the climatic benefits for itself.

GCMs and weather-forecasting models (WFMs) have some significant differences. GCMs place much more emphasis on interactions, including feedbacks, between the atmosphere and the hydrosphere, cryosphere, lithosphere, and biosphere, because these become increasingly important over long time periods. They are less important in forecasting weather for the next week, so WFMs are mostly concerned with processes within the atmosphere, including feedbacks, but between vertical motion and latent heat release, for example.

Another major difference between GCMs and WFMs is the time step from one iteration of the model to the next. GCMs step the model hours at a time, use grid spacings that are 50 km or more, and may do 10,000 iterations or more. WFMs use a time step of only a few minutes and space the grid at less than 50 km, and perform only hundreds of iterations. WFMs need fine spatial resolution and short time steps to be able to predict small and fast-moving weather disturbances. Both types of models are designed to answer the specific types of questions we pose to them.