MOTION OF THE EARTH’S ATMOSPHERE has one of the greatest influences on human lives, controlling climate, rainfall, weather patterns, and long-range transportation. It is driven largely by differences in insolation, with influences from other factors, including topography, land-sea interfaces, and especially rotation of the planet. These factors control motion at local scales, like between a mountain and valley, at larger scales encompassing major storm systems, and at global scales, determining the prevailing wind directions for the entire planet. All of these circulations are governed by similar physical principles, which explain wind, weather patterns, and climate.

Large-scale patterns of atmospheric circulation are shown here for the Northern Hemisphere. Examine all the components on this figure and think about what you know about each. Do you recognize some of the features and names? Two features on this figure are identified with the term “jet stream.” You may have heard this term watching the nightly weather report or from a captain on a cross-country airline flight. What is a jet stream and what effect does it have on weather and flying?

Prominent labels of H and L represent areas with relatively higher and lower air pressure, respectively. What is air pressure and why do some areas have higher or lower pressure than other areas?

Distinctive wind patterns, shown by white arrows, are associated with the areas of high and low pressure. The winds are flowing outward and in a clockwise direction from the high, but inward and in a counterclockwise direction from the low. These directions would be reversed for highs and lows in the Southern Hemisphere. Why do wind patterns develop around areas of high and low pressures, why do these patterns spiral, and why are some spirals clockwise and others counterclockwise? 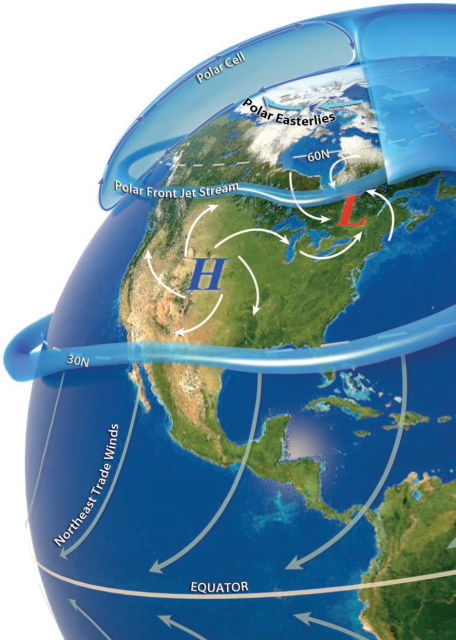 North of the equator, prevailing winds (shown with large gray arrows) have gently curved shapes. For most of human history, transportation routes depended on local and regional atmospheric circulation. These winds were named “trade winds” because of their importance in dictating the patterns of world commerce. The trade winds circulate from  Spain southwestward, causing Christopher Columbus to land in the Bahamas rather than the present U.S. What causes winds blowing toward the equator to be deflected to the west?

Prevailing winds from the north and south converge near the equator. This zone of convergence, called the Intertropical Convergence Zone (ITCZ), is a locus of humid air and stormy weather.

What causes winds to converge near the equator, and why does this convergence cause unsettled weather? 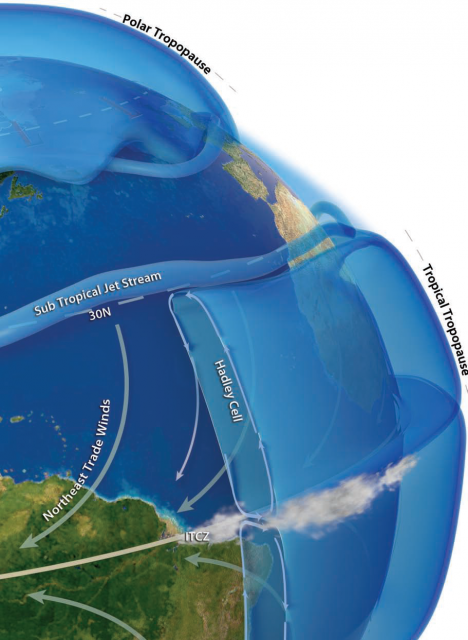 Near-surface winds interact with upward- and downward-flowing air higher in the atmosphere, together forming huge tube-shaped air circuits called circulation cells. The most prominent of these are Hadley Cells, one of which occurs on either side of the equator. What controls the existence and location of circulation cells, and how do the Hadley Cells influence global weather and climate?

Motion in the atmosphere affects us in many ways. It controls short-term weather and long-term climate, including typical average, maximum, and minimum temperatures. The large-scale patterns of air circulation, along with effects of local winds, cause some areas to be deserts and others to be rain forests, and cause winds to change direction with the seasons and from night to day. Regional air circulation affects the amount and timing of rainfall for a region, which in turn controls the types of soils, vegetation, agriculture, and animals situated in an area. Winds determine which areas of the U.S. are more conducive to wind-power generation than others. The result of these global, regional, and local atmospheric motions is a world in which the tropics are not too hot, the polar areas are not too cold, and no areas have too little moisture for life.