What Are the Consequences of Climate Change?

CLIMATE CHANGE HAS MANY IMPACTS, ranging from obvious ones like an increase in global temperatures, to less obvious ones, such as a possible increase in malaria and other diseases. Some of these consequences are highly probable, whereas others are very speculative. On these pages, we briefly introduce some of the most likely results of climate change, specifically those related to global warming. Abundant information is available elsewhere, including reports by governmental and nongovernmental organizations. The most detailed and widely cited reports are those by the United Nations-sponsored Intergovernmental Panel on Climate Change (IPCC).

What Are Some Possible Consequences of Climate Change to the Environment?

1. The figure below illustrates some consequences of global warming, but many more are possible. Examine the figure and think about what you know about the feature being depicted and how it might respond to an increase in average temperatures. Then read the text.

2. The most obvious result of global warming would be an increase in global temperatures. However, computer models of climate indicate that many areas, especially those near the poles, will indeed increase in temperature, but other regions might get colder.

3. Higher temperatures would be predicted to cause more melting of snow and ice, resulting in glaciers melting back and becoming less extensive, as has been observed.

4. Higher temperatures and altered ocean circulation could lead to more drought in some places and even the expansion of desert areas, the process of desertification. 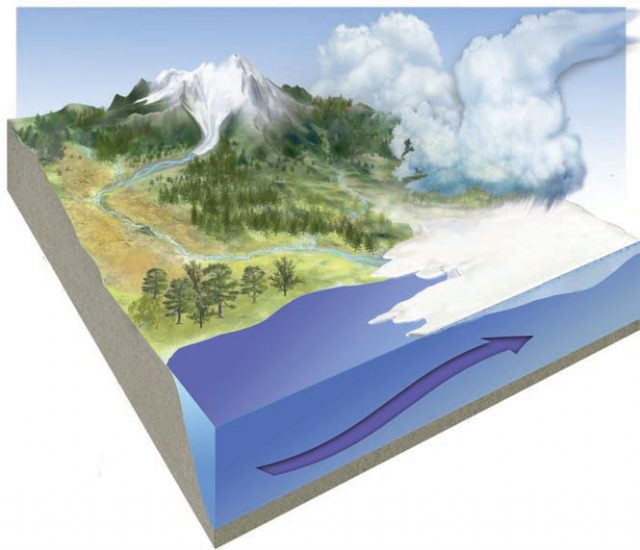 5. Changes in global temperatures and accompanying changes in precipitation patterns can affect the distribution of communities of plants and animals. In response to warming, such communities may shift to higher elevations or higher latitudes to stay within an optimal temperature range. Climate change is predicted to decrease the geographic range of some communities, while increasing the range of others. Included in this consideration are croplands, some of which will benefit from global warming, while others will suffer.

6. An increase in global temperatures is predicted to increase evaporation from warmer surface waters. This would increase both humidity and water-vapor capacity of the air. Warmer temperatures and more humidity may increase precipitation. More precipitation, along with more melting of glaciers, would lead to more runoff from streams, with an associated increase in the amount of flooding. Increased runoff also means a larger influx of fresh water into the ocean.

7. Climate change has the potential to change the frequency and intensity of severe weather. For various reasons, global warming can either increase or decrease the frequency of certain types of severe storms. These are presented on the next page.

8. Global warming is predicted, and observed, to cause an increase in global sea-surface temperatures (SST) and a decrease in the amount of sea ice, at least in the Arctic.

9. The various consequences have complex interactions, as between SST, humidity, precipitation, runoff, and influx of fresh water into the ocean. Such interactions could result in other changes, like a change in ocean currents, including those involved in the thermohaline conveyor, an important moderator of global climate.

10. The computer-generated images below show the decrease in the amount of sea ice in the Arctic from 1979 (left globe) to 2003 (right globe), the period of the most rapid global and regional warming. Additional loss of Arctic sea ice has occurred since 2003, with some year-to-year increases but an overall decrease. 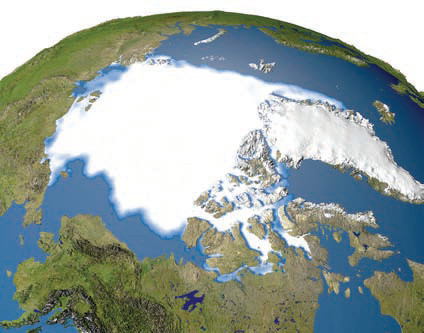 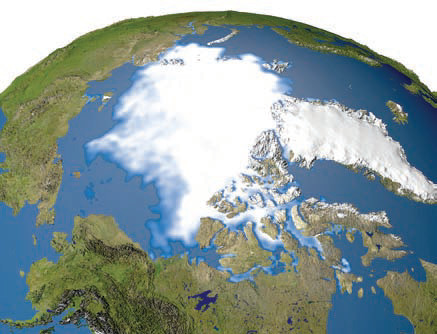 11. Since the middle of the 1800s and before, sea level has been slowly increasing, rising 0.2 meters in 200 years. Currently, there is scientific debate about whether the rate of sea level rise is remaining the same or is accelerating with time. 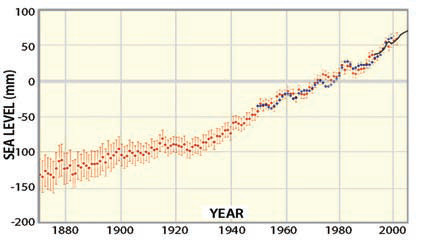 In 2005, an unprecedented 28 named tropical storms formed in the Atlantic, and 19 formed in 2012. Patterns such as these have led people to wonder whether we are moving into an era of more numerous and destructive tropical cyclones, with the increase attributed to climate change. What does the science say about these important questions? Observed increases in the frequency of all forms of severe weather are at least partially the result of Doppler radar and other improved remote-sensing technology, which allow us to detect storms more easily. One approach is to compile data on severe storms over time, to examine whether the frequency and severity of storms correlates with observations of climate change. But remember that simple correlation does not demonstrate causation.

1. Observational and modeling studies suggest that climate change will increase SST, which in turn might increase the intensity and duration of the strongest storms. Warming might also lengthen the severe tropical cyclone season. In theory, increased SST would allow an increase in evaporated water, which increases the amount of latent heat in the atmosphere. Since latent-energy release — when the evaporated water condenses or deposits — is a key ingredient for any type of severe weather, increased evaporation can result in more energy for storms. The end result is larger, taller clouds fueling more powerful storms.

2. Warmer sea and land surfaces are also likely to affect atmospheric stability. Recall that with warmer air near the surface, the environmental lapse rate will steepen. A steep environmental lapse rate enhances the ability of air to rise, increasing the instability of the atmosphere. In other words, warmer air near the surface will contribute to taller clouds as long as moisture is present. 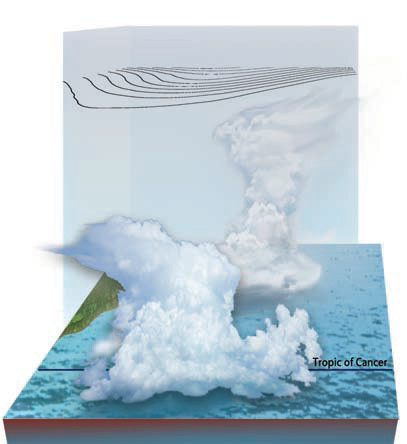 3. Global warming could cause changes to upper-level circulation, which in turn could cause underlying areas to experience more frequent precipitation or drought. Changes in upper level circulation patterns might make the upper levels of the atmosphere more or less favorable for cyclone formation. Specifically, if climate change displaces or decreases the flow of upper-level westerlies, fewer developing tropical cyclones may have their tops sheared off as they move westward. Alternatively, global warming could increase vertical wind shear, which might cause mid-latitude storms to be more severe. What do the data say?

4. The graph below plots the number of Atlantic storms for each year. The time periods represented on the graph correspond to the interval of time when global temperatures have demonstrably increased (although in detail, temperatures have gone up and down during several approximately 30-year cycles). Research using these and similar data suggests that short-lived Atlantic tropical cyclones may have become more frequent over the years, but moderate-duration storms have not.

6. Another question to evaluate is whether global warming has caused an increase in the number of mid-latitude cyclones or tornadoes. Some scientists have proposed that warming provides additional energy that might enhance the environment for such severe storms. Examine the graph below, which plots the number of tornadoes per year during the time when most warming occurred. 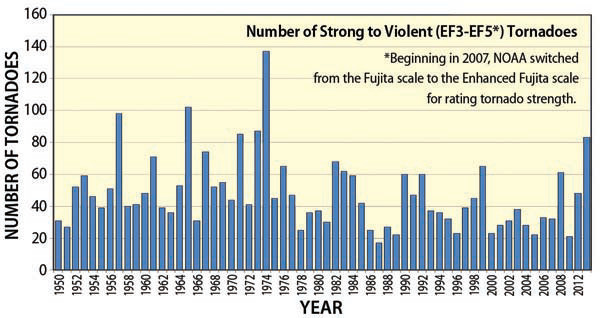 7. The data indicate that the number of strong-to-violent tornadoes in the U.S. has not increased over time. One possible explanation is that increasing surface temperatures would presumably be accompanied by increases in upper-level temperatures, leading to no net change in stability, as the adiabatically rising air and the air around it have both warmed.