What Causes Subarctic and Polar Climates?

POLAR AND ADJACENT SUBPOLAR CLIMATES occur at very high latitudes in both the Northern and Southern Hemispheres. Climates of polar regions, assigned to Group E in the Koppen system, are extremely cold and are subdivided into Ice Cap (EF) and Tundra climate (ET). Farther from the pole, the Tundra climate gives way to another Group D climate, the Subarctic climate (Dfc). The Subarctic and Group E climates are characterized by frigid temperatures and low precipitation totals.

Where Are Subarctic, Tundra, and Ice Cap Climates Found?

The polar (Group E) climates, Ice Cap (EF) and Tundra (ET), are centered around both poles (although only the North Pole is shown here). In the Northern Hemisphere, the Ice Cap climate is restricted to Greenland, but the Tundra climate covers the Arctic Ocean, high Arctic islands, parts of the North Atlantic, and northernmost North America, Asia, and Europe. 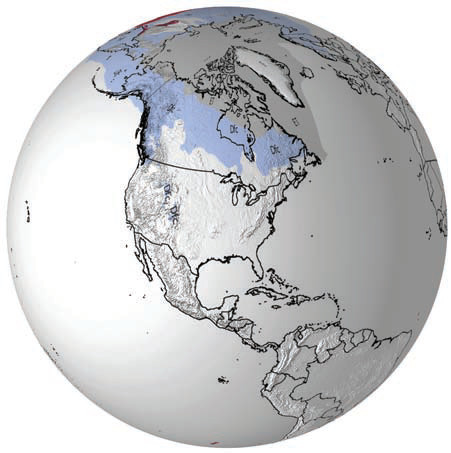 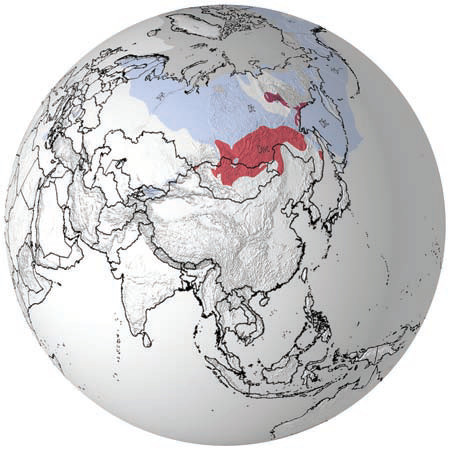 Antarctica is mostly covered by ice and snow and so possesses an Ice Cap climate. The surrounding ocean is classified as a Tundra climate, and true tundra (polar vegetation with no trees) occurs in some islands and other ice-free lands. 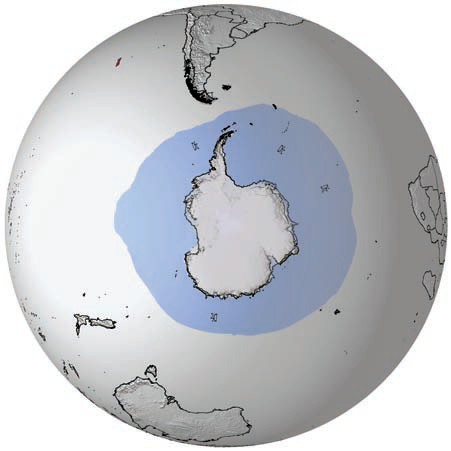 What Causes Low Precipitation Amounts in Subarctic and Polar Climates?

1. Polar and adjacent Subarctic climates are characterized by low precipitation, except locally. This is largely because these are very cold places, as depicted on this globe of average annual temperatures. Very low temperatures have a number of implications for precipitation.

2. Very cold air has a low water-vapor capacity, so cold air allows only limited amounts of water vapor. Without much water vapor, it is difficult to form clouds and even more difficult to generate precipitation. Also, much energy goes into latent heat during melting of ice and thawing of upper parts of the soil during the summer.

3. The most likely scenario to produce precipitation (especially over land) occurs in summertime, when the boundary separating cold and warm air masses — the polar front — makes its nearest approach to subarctic and polar latitudes. Marine areas often have precipitation peaks in fall, as the seasonal warming is delayed over oceans. 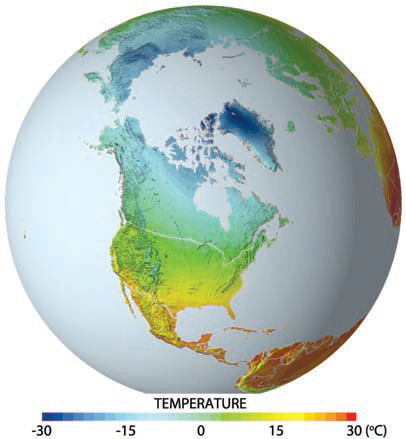 4. Another limiting factor is that much of the region of Subarctic and polar climates is inland, or near frozen seas. Humidity flowing into the area must primarily originate over unfrozen seas away from the pole, but persistent high pressure over the pole causes wind to generally blow away from the poles, driving any moist air away. The high pressure and sinking air also limits atmospheric instability.

5. For most of the year, subarctic and polar regions lie far from the zone where warm and cold air masses meet, so frontal precipitation is minimal. Tropical cyclones can never penetrate far enough poleward and inland to influence Subarctic, Subarctic Monsoon, and polar climates.

What Controls the Temperature Regime in Subarctic and Polar Climates?

Low Sun Angles —The latitude of these climates dictates that Sun angles are very low during summer  and below the horizon for much of winter (24 hours of darkness). A low Sun angle results in less sunlight per unit area and a long path length through the atmosphere, which increases the amount of insolation absorbed, reflected, and scattered in the air before it reaches the surface. 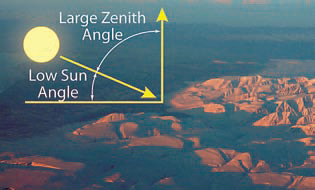 Seasonal Variation in Day Length — Sunlight hours in winter are very short, if they exist at all. Even though summer days have many hours (even 24 on some days inside the Arctic Circle), the low Sun angles prohibit the surface from warming much. Much of this energy is used to melt ice cover and to thaw the frozen soil layer, so less energy is available for sensible heating. 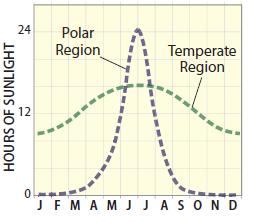 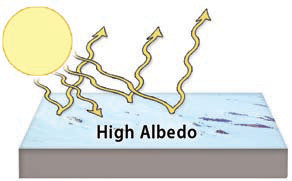 Continentality —Northern polar oceanic areas are ice covered for much, if not all, of the year. Extensive sea ice, which can surround the coastline and cover most of the Arctic Ocean, almost functions like a single large continent during some times of the year. The setting causes the North Pole to be characterized by intense continentality, with bitter low temperatures. The South Pole, centered over Antarctica, is a large, cold continent, with a fringe of sea ice that grows in the winter (e.g., July) and shrinks in the summer (December). The South Pole is higher in elevation than the North Pole and is by far the coldest place on Earth. 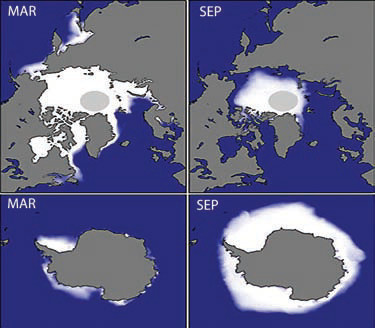 Atmospheric Circulation — Strong upper-level westerlies circumnavigate the pole in each hemisphere. Air descending from aloft at the polar high is very cold, ensuring that Arctic and Subarctic climates are cold and dry. Arctic and Antarctic (A) air masses form near the poles and can migrate toward the equator as the westerlies dip equatorward in a trough, such as is shown here. 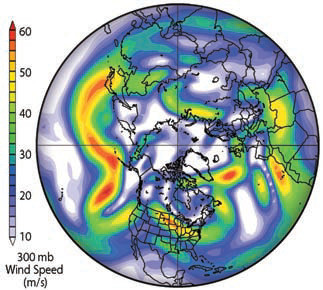