CLIMATE CHANGE IS ALWAYS OCCURRING, including global warming since the mid-1800s. There are many natural causes of climate change, including changes in Earth’s orbit around the Sun and changes in sunspot activity. Many scientists propose that human activities, including the burning of fossil fuels and the clearing of forests, also contribute to climate change by releasing greenhouse gases to the atmosphere. Other factors may lead to global cooling, including ash from large volcanic eruptions and an increase in certain aerosols in the atmosphere. Here, we examine some of the factors that can influence our climate.

Earth’s surface temperatures are dominated by energy from the Sun. Insolation heats the oceans, land, and atmosphere, but several factors influence how much of this energy reaches the surface and how much is retained.

Interaction of Insolation with Earth’s Atmosphere, Oceans, and Land

1. Nearly all of Earth’s heating at the surface comes from insolation, which heats the atmosphere, land, and oceans. Most of this energy escapes eventually back into space in the form of longwave infrared energy. The rest is delayed by interactions with Earth, keeping the planet warm by a process called the greenhouse effect. The amount of insolation hitting Earth varies regularly, by a small amount, due to orbital fluctuations and changes in the Sun’s energy output, as expressed by changes in sunspot activity. Sunspots are the darker areas that, on average, appear and disappear on the surface of the Sun in an 11-year solar cycle. 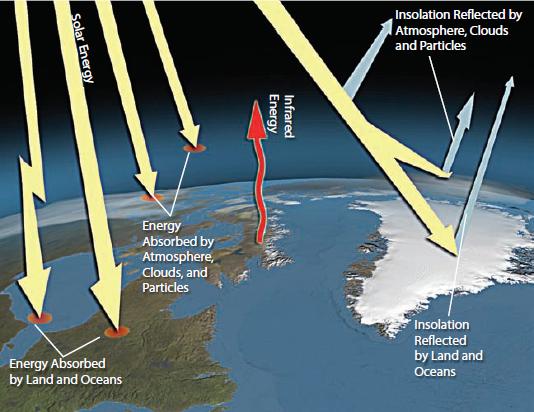 3. Insolation is absorbed by clouds, by soot from burning, and by fine particles (aerosols), which are produced by volcanoes, industry, and automobiles. Some of this absorbed energy radiates back into space as infrared (longwave) energy (shown by the wavy red arrow). Clouds and particles also reflect some insolation.

4. Some insolation is reflected back to space from the land surface and oceans. Ice in continental glaciers is an effective reflector. As glaciers melt, darker land or ocean is uncovered. This increases the amount of energy that is absorbed by Earth and subsequently re-radiated back to the atmosphere.

5. Some insolation is absorbed by the land and the oceans, both of which then radiate infrared (longwave) energy back into the atmosphere. Some of this infrared energy is absorbed by atmospheric gases, such as water vapor (H2O), carbon dioxide (CO2), methane (CH4), and nitrous oxide (N2O), which are called greenhouse gases. Some portion of these gases is produced naturally and some is produced by human activities.

Earth’s orbit is affected almost exclusively by the Sun and Moon, causing it to cycle from more elliptical to more circular paths with one cycle completed over about 100,000 years. This influences Earth’s climate, but the current global warming has occurred in less than 200 years. This is too short a time period for orbital changes to have caused the observed warming. The tilt and direction of Earth’s axis of rotation also changes, which changes the contrast of the seasons, but these effects occur over tens of thousands of years. 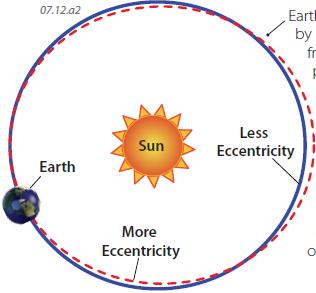 The Sun is a candidate for causing climate change. Solar activity, as presented by the number of sunspots, clearly correlates to earlier changes in temperature, but less so to recent warming. Cosmogenic isotopes in ice cores and tree rings (proxies) suggest that the Sun’s energy emission has varied by only 1% over the last 2,000 years. Both data sets are relevant when evaluating the Sun’s role in recent warming. 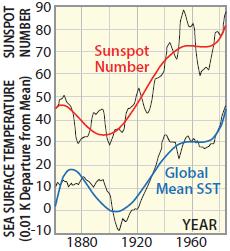 1. Several gases in Earth’s atmosphere absorb infrared radiation emitted by Earth. This causes them to vibrate and heat up, and then to emit infrared radiation. This radiation can escape into space or be absorbed by other greenhouse gases, mostly lower in the atmosphere where the concentration of greenhouse gases is the highest. Since 1957, atmospheric scientists have collected air samples on the high peaks of Hawaii. The data for Mauna Loa are plotted on this graph, which shows CO2 content in the atmosphere as a function of time. The con centration of CO2 in air, represented by the red line, has increased by 20% in the last 40 years. Most of this increase is attributed to humans, especially through the burning of fossil fuels. 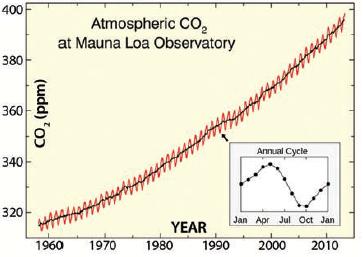 2. Our oceans are a huge reservoir for dissolved gases and other chemical components, including CO2. As the CO2 of our atmosphere increases, a large amount of this goes into the oceans, where it affects seawater chemistry, especially the acidity. This ocean acidification and its impact on sea life lead to concerns about increases in atmospheric CO2. Seawater can dissolve less CO2 when it is warm, so it releases CO2 back to the atmosphere as it warms, as is occurring now. So some increase in the atmospheric CO2 could be a result of recent warming.

3. Long-term records of CO2 and other greenhouse gases are contained within ice cores and can be traced back hundreds of thousands of years. Ice cores from Antarctica have been analyzed for CO2, isotopic temperature, and isotopic age. The data, shown on this graph, allow comparison between prior natural variations and changes in the last several hundred years.

5. Scientists have used data from ice cores and other proxies to interpret how atmospheric gases changed in the past few hundred years. These data indicate that levels of CO2, CH4, and N2O have increased since the start of the Industrial Revolution of the last part of the 18th century. Many scientists infer that these increases in greenhouse gases are partly res ponsible for the recent increase in temperature, but there remains debate about how much our human activities have affected, or will affect, our climate.

Recent discoveries have changed our view of the relationship between ocean currents and climate. Studies of the oceans have documented that separate ocean basins (e.g., the Pacific Ocean) display variations in temperature that occur over years or decades — ocean oscillations.

One long-recognized oscillation is the El Ni?o–La Ni?a effect and is called the El Ni?o–Southern Oscillation (ENSO for short). More recently, we have discovered other ocean oscillations, including the Pacific Decadal Oscillation (PDO) and the Atlantic Multidecadal Oscillation (AMO). As their names imply, these oscillations may last decades, whereas ENSO cycles last a year or two. Variations in sea-surface temperatures (SST) and atmospheric pressure can be used to calculate a numerical index for each oscillation, as a way to represent the changes. The graph here shows values for the Atlantic Ocean (AMO), relative to its long-term average. The AMO represents SST in the Atlantic basin — high numbers indicate warm SST. This graph shows that Atlantic SST undergoes cycles that last several decades. These cycles also relate to periods of abundant or rarer tropical cyclones, and they also show some similar patterns to global temperatures. Because of such correlations, climate scientists are increasingly examining whether oscillations are primarily a cause or effect of climate change.