How Do Air Pollution and Urbanization Affect and Respond to the Local Climate?

THE CLIMATE OF A PLACE is a combination of the regional atmospheric conditions, such as those expressed by the Koppen climate classification, and local effects caused by topography, local wind directions, pollution, and other factors. These result in local variations, commonly called the local climate or the microclimate. The local climate is greatly influenced by how urbanized the area is. The constructed features of cities and towns influence how much insolation heats the surface, which in turn heats the air, and how this heat is retained and released. Cities affect their local climate by being warmer than rural areas, especially at night, a phenomenon known as an urban heat island (UHI).

How Do Climate and Human Geography Affect the Distribution of Pollution?

Some emitted pollutants react with sunlight, water, or other contaminants to create a new pollutant — a secondary pollutant — that can be more harmful than the original. Climate and physical geography of Earth’s surface play a direct role in the degree to which these pollutants are concentrated, but so do the spatial distribution of population density and activities of people, which are part of human geography. Sprawling cities and industrial areas are the largest sources of air pollution in the U.S., where air quality has improved steadily since passage of the original Clean Air Act in 1970.

Sunlight and volatile organic compounds can react with NOx to generate secondary pollutants, including ozone (O3). The same O3 that protects us when it is in the stratosphere is toxic near the ground. It eats away things, such as leaf cuticles and human respiratory tissue. Sunny climates are the most susceptible to O3 pollution, particularly in summer when the Sun angle is high and daylight hours are abundant. Atmospheric circulation moves this O3 from one location and altitude to another. 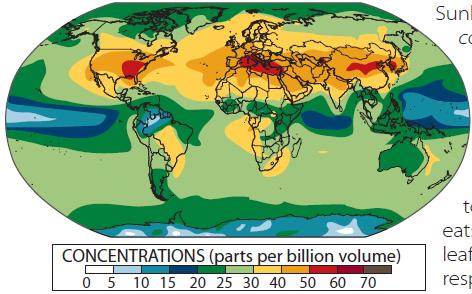 Atmospheric water can react with SO2 or NOx to produce precipitation that is acidic (has a low pH). This map of average pH of precipitation in the U.S. shows that humid climates in industrial areas are particularly prone to acidic precipitation (acid rain). 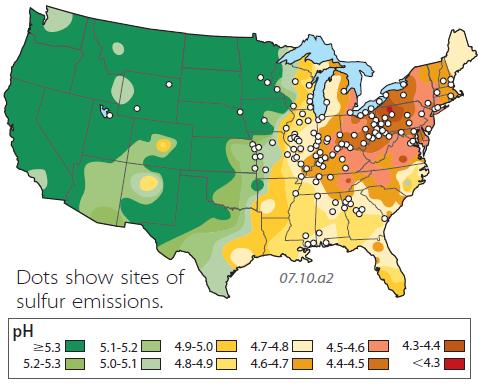 What Is the Impact of Pollution on Energy and Precipitation?

2. If the pollution is a gas, insolation is scattered in all directions equally. If it is a solid or liquid air pollutant — an aerosol — some of the energy is reflected, but much more of it is scattered forward (down to the surface). The downward-scattered radiation does heat the surface, but only to perhaps 90% of what it would have been heated without the aerosols being present.

3. Insolation may also be absorbed by the aerosol. This increases the temperature of the aerosol layer but prevents the surface below it from being heated as much. The effect of absorption, reflection, and scattering decreases the environmental lapse rate, stabilizing the atmosphere and reducing the likelihood of precipitation. 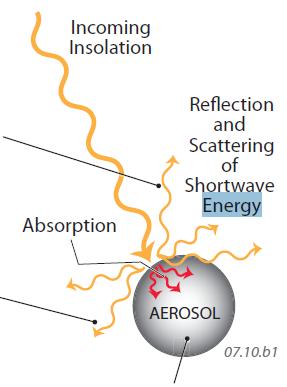 4. This is not the whole story, however. Solid aerosols may also enhance precipitation by acting as condensation nuclei — solids that attract water and therefore form the center of a growing precipitation droplet. If condensation occurs, latent heat is released. If precipitation results, it makes the surface wetter and cooler, so the two effects partly cancel each other out.

5. Solid aerosols are often identified by their diameter, regardless of chemical composition. For example, PM10 stands for “particulate matter with diameters of <=10 micrometers (mm).” Aside from the impacts on the local energy and water budgets, and therefore the local climate, aerosols impact the human respiratory system by causing difficulty breathing, cancers, and lung-tissue damage, particularly in the very young, the elderly, and people with preexisting respiratory illnesses. Smaller diameters tend to be more dangerous because they can penetrate deeper into the respiratory system.

What Is an Urban Heat Island and What Causes One to Develop?

When a city is first built or enlarges, changes in land use and associated human construction replace whatever was there previously — natural lands, parks, undeveloped lots, agricultural fields, or some other kind of open space. Buildings, concrete, sidewalks, and glass windows have different albedos and thermal properties than the open space they replaced. This commonly causes the urban area to become warmer than the surrounding rural area — the city is an urban heat island (UHI). The surrounding lands generally are cooler overall than the urban areas because they contain more open space, natural or cultivated vegetation, and surface water.

1. This figure illustrates some ways in which a UHI forms. Buildings and other constructed features interact in a complex way with incoming shortwave radiation, generally decreasing the albedo in some places, like from dark asphalt, and increasing it in others, such as from light-colored rooftops and reflective glass. Buildings that are close to one another can change the albedo and cause the radiation to reflect from one surface to another.

2. Building materials are designed to allow slow absorption of insolation during the hot daytime to prevent heat from penetrating the interiors of homes and other inside spaces. At night, when outdoor temperatures fall, the energy stored in the materials is slowly released to the atmosphere as longwave radiation. The buildings can hinder the escape of this longwave energy out to space, keeping the nighttime temperatures warmer.

3. Roads, gutters, and storm drains remove water from the surface quickly after rain falls, limiting the amount of water that infiltrates the ground. This prevents water from being evaporated and transpired slowly, and instead allows insolation to raise the temperature of the ground, rather than being converted into latent heat during evaporation. Also, urban areas have fewer tree-shaded areas and less standing water compared with rural areas, so this further allows direct heating of the ground.

4. Urban areas also have a high concentration of waste heat from industrial, domestic, and transportation sources, such as cars, furnaces, lighting, electrical devices of all sorts, and, in colder climates, burning fireplaces. Even air conditioners generate more heat than they remove, adding more waste heat.

5. The UHI is affected by the size of the city, amount and location of green space, and economic activities. The satellite image here shows downtown Atlanta (gray area in the middle) a 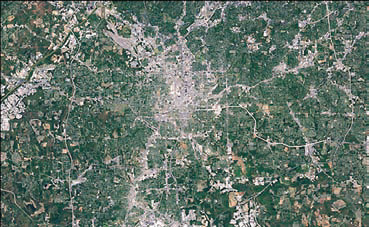 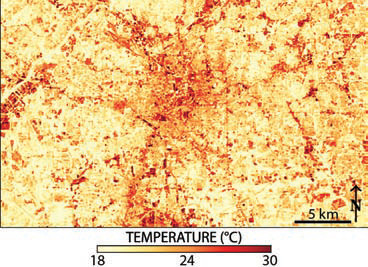 Other Climate Impacts Associated with Urbanization

Urbanization affects local environments in many other ways. In addition to increasing the temperature over the city (UHI), urbanization generally lowers the relative humidity because of higher temperatures and lack of surface water available to be evaporated. An exception to this occurs in some desert cities, like Phoenix, Arizona, where an abundance of irrigation canals, artificial lakes, golf courses, and watered lawns can raise humidities compared to the surrounding dry desert — an oasis effect.

Urbanization can also change wind speeds and directions. Wind speeds are generally lower in cities because buildings block winds and provide friction that slows the wind. Winds can be stronger locally if they blow parallel to streets, allowing them to be channeled between buildings, in what is called an urban canyon. Since urbanization modulates temperature and pressure, it can also affect the amounts and spatial distribution of precipitation. For example, precipitation is generally higher downwind of a city because abundant particulates introduced into the air by urban activities provide nuclei for condensation. Fog can be reduced in cities by changes in temperature and humidity, but smog, which is related to pollution, is concentrated near cities.