What Is the Global Water Budget?

THE HYDROLOGIC CYCLE is key to many physical and biological processes on Earth as water moves in and out of different parts of the system. It also results in the conversion of solar energy to other forms of energy, such as when water that evaporated from the ocean later falls as rain, forms a river, and moves material in a streambed.

How Much Water Moves Between the Global Stores of Water?

1. When considering motion of water in the Earth system, we want to know how much water a part of the system — called a store — holds, expressed as a volume (e.g., km3). We also measure how much water moves in and out of that store over some amount of time, which is a flux, in this case described with units of volume per time. The three main stores are the oceans, continents, and atmosphere.

2. Annually 577,000 km3 of water evaporates and falls from the atmosphere. The daily quantity of energy involved in this process is approximately 2 million times the worldwide energy-generating capacity.

3. The ocean holds about 97% of Earth’s known water, and evaporation over oceans accounts for 84% of all global evaporation. About 77% of Earth’s precipitation falls on the oceans. These high percentages emphasize the significance of oceans as moderators of global temperatures. 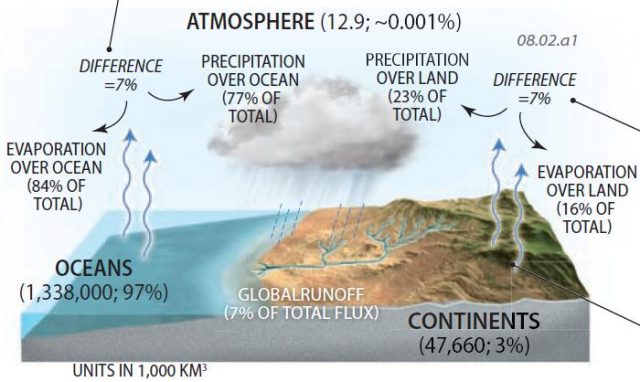 4. In terms of fluxes between the atmosphere and the oceans, the ocean store would be reduced by 7% (84% minus 77%) annually.

5. Approximately 23% of global precipitation falls over continents. This is a little less than the percentage of the Earth’s surface that continents occupy. However, only 16% of global evaporation comes from the continents — large areas of the continents are in arid (dry) climates, and much continental water is stored as groundwater or as ice and snow in regions of low insolation.

6. In terms of fluxes, input of precipitation to the continents exceeds evaporation output by 7% annually. That is, every year, the continents gain water from their exchange with the atmosphere. Without further outputs, the stores of fresh water on the continents should be increasing.

7. The imbalances between the atmosphere-ocean and atmospherecontinent exchanges (difference in inputs and outputs) is redressed by the flow of excess waters from the continents to the oceans by all the rivers in the world — global runoff. Note that approximately two-thirds of all water falling on the continents leaves as evaporation and one-third leaves by streams. Evaporation from the global oceans is 12 times larger than the combined flows of all the streams in the world.

What Factors Control How Quickly Water Moves Through Each Store?

The amount of water in the stores is of practical interest, but says little about the dynamic nature of the planetary surface. Movement of water between global hydrologic stores represents energy available to do work in shaping the Earth’s surface. A measure of the “dynamism” of each store is the average length of time that a drop of water remains in that store — its average residence time.

1. Consider a box (a store) with 10 spheres (think water molecule), including one of particular interest in red. In each time period, one sphere is removed (output) and a new sphere inserted (input). On average how many time periods will pass before the red sphere is selected (i.e., how long will
the red sphere stay in the store)? 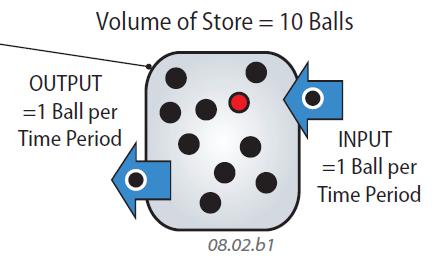 2. Application of statistical theory indicates that the red sphere will most likely be removed (output) during the first sampling period (the time period over which, in this case, 10 spheres could have been output). It is less likely that the sphere would be around for successive samplings. The average length of time that the sphere stays in the store is 10 time periods. 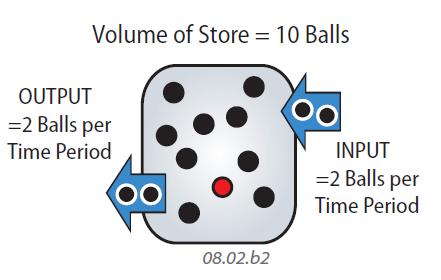 3. When the rates of inputs and outputs are increased (e.g., 2 spheres per time period), the chances of selecting the red sphere increase and the average time period declines to 5. 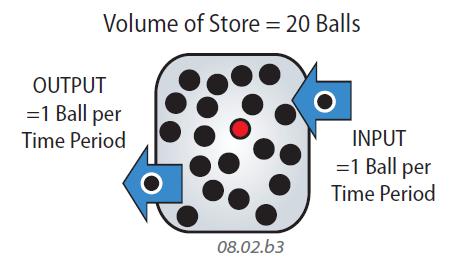 4. If the size of the store (number of spheres) is increased to 20, then the chance of selecting the red sphere at any time period declines and the average time period increases to 20.

What Are Average Residence Times in the Global Stores of Water?

1. Water moves at different rates through each different subsystem (e.g., evaporation from the ocean) and its stores (e.g., ocean and atmosphere). This figure depicts the average rates at which water moves from one store to another. This rate, in turn, indicates how long, on average, that molecule will stay in the store — its residence time. To calculate the residence time, we simply divide the total volume of the store by the flux leaving it.

2. The volume of the atmospheric store is very small (12,900 km3), yet 577,000 km3 of water enters and leaves it annually, yielding average residence times of approximately 0.02 yr (i.e., 12,900/577,000), or 8 days. Thus, once evaporated into the atmosphere from the planetary surface, a water molecule stays there on average a very short time. The atmosphere is therefore very responsive to changes in energy conditions at Earth’s surface.

3. Oceans are by far the largest store (1,338,000,000 km3). Inputs (precipitation and runoff ) total 484,700 km3/yr, as does the output of evaporation. This yields an average residence time on the order of 3,000 years (1,338,000,000/484,700). The oceans are stratified vertically (warmer on top than on bottom) and evaporation varies geographically, but once water enters the ocean store it will likely stay there an average of several thousand years. Oceans therefore respond more slowly to changes, despite the fact that the atmosphere and oceans are strongly linked through evaporation and precipitation.

4. Water stored in and on the continents (47,600,000 km3) is smaller than the amount of water in the oceans but much larger than the amount in the atmosphere. The input is precipitation and the outputs are evaporation and runoff. The relatively limited spatial extent of continents causes the average annual fluxes to be considerably smaller than between ocean and atmosphere. The combination of smaller fluxes and the intermediate size of the continental store results in an average residence time of approximately 350 years. Recall that the vast majority of fresh water on continents is stored in groundwater and ice, both of which may “lock up” water for centuries. Here, we have ignored water that percolates into the soil as groundwater.

How Are Fluxes of Water Linked to Shaping of Earth’s Surface?

When we imagine the processes that reshape landscapes, we might think of events like powerful floods, scouring glaciers, turbulent mudflows, and blowing sand. All of these involve energy resulting from the movement of liquid water, ice, Earth materials, or the atmosphere. This type of energy is called kinetic energy — energy by virtue of motion. Also linked to the flux of water in some settings is potential energy — energy by virtue of being some height above a surface and capable of moving if allowed to.

1. Examine this photograph of a balanced rock, which obviously has the potential to fall sometime in the future — the rock has potential energy relative to the ground below (the datum). We can imagine how hard the rock would strike the ground when it fell, imparting a large force onto the ground it strikes. Clearly, this rock has a large amount of potential energy.

2. With the help of gravity, the rock’s potential energy is converted into kinetic energy (the energy of motion) when the rock begins to fall. The resulting motion of the rock can perform work, for instance the crushing of stones on which the rock falls. 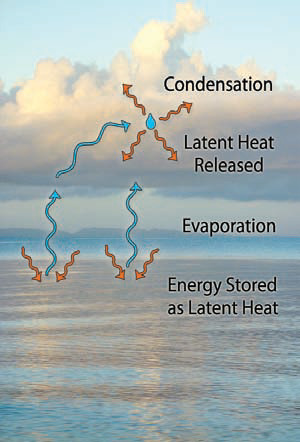 3. After the rock has fallen and is in its new, lower position, it has lost its potential energy relative to the ground surface (the datum). We could increase its potential energy if we used a crane to lift the rock back onto its pedestal. This would require an expenditure of energy by the crane, and that energy expenditure is now stored in terms of the greater elevation and therefore greater potential energy. Note that once the rock is on the ground it could be moved by running water, such as that released by the thunderstorm in the background. The relatively short average residence times of water (calculated in the section above) show that water can quickly evaporate from the ocean, be lifted by storms, and be pulled by gravity back to the Earth as precipitation, renewing the water’s ability to move across the surface.

4. By means of latent heat transfer and the evaporation of water, the Sun’s energy is able to renew the potential energy of water molecules by lifting them tens of thousands of meters above the datum (sea level). Following condensation and the formation of precipitation, the molecules can fall on high-elevation topography to begin the journey downslope, picking up kinetic energy. The short residence time within the atmospheric store ensures that this process is repeated over and over again with a very high frequency.