What Is the Relationship Between Surface Water and Groundwater?

SURFACE WATER AND GROUNDWATER ARE NOT ISOLATED SYSTEMS. Rather, they are highly in terconnected with water flowing from the surface to the subsurface and back again. Most groundwater forms from surface water that seeps into the ground, and some streams and lakes are fed by groundwater.

How Does Water Move Between the Surface and Subsurface?

Surface water can soak into the subsurface and become groundwater if the surface material is permeable and the water table is deep enough so there is an unsaturated zone into which water can seep. Percolation of water into the groundwater system helps replenish or recharge water lost by wells, springs, or other parts of the system. Such replenishment is referred to as groundwater recharge. 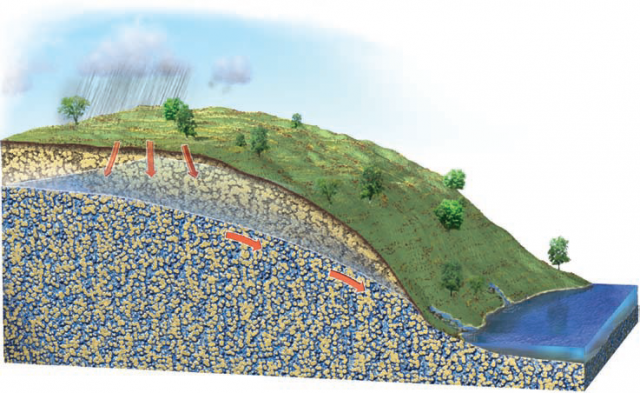 As long as topography does not intersect the water table, the groundwater will remain at depth, generally flowing toward low elevations. Where the water table intersects the surface, groundwater can flow out onto the land. Such flow forms many springs and can add water to lakes and streams, keeping them from drying up. Seen in this context, a spring represents the interaction between surface topography and the water table, and whether groundwater forms a spring depends on the geometry of both. The water table is the more subdued of the two, so a spring is usually along a topographic low spot or a steeper part of a slope — the spring shown in this figure is at both a low spot and on a steeper part of the slope.

What Causes Groundwater to Emerge as a Spring?

A spring is a place where groundwater flows out of the ground onto the surface. At most springs, the water table intersects the surface. This can occur in a variety of geologic settings, a few of which are summarized below. Some groundwater is heated by hot rocks, or perhaps magma, before coming to the surface, forming warm springs or hot springs. In rare cases, hot springs that are near the boiling temperatures of water can form a geyser, a kind of hot spring that intermittently erupts fountains or sprays of hot water and steam, like Old Faithful, a world-famous geyser in Yellowstone National Park of northwestern Wyoming and adjacent parts of Idaho and Montana.

Many springs are related to limestone aquifers. In such rocks, water can flow easily along dissolved bedding planes or through caves or fractures widened by dissolution. Where the saturated zone in the aquifer intersects the surface, water can flow out in a spring. In the spring to the right, water rushes out of dissolved fractures and other passageways in limestone, producing a deafening roar and earning the spring its name — Thunder Springs. It is in the walls of a side canyon of the Grand Canyon, Arizona. 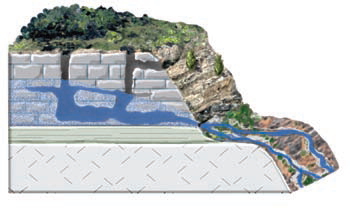 Many springs are related to boundaries between two different rock units. In the example shown here, a sequence of layered rocks sits on top of a granite (the lowest unit). The boundary at the top of the granite is a buried erosion surface, called an unconformity. Groundwater flows down through the layered rocks until it encounters the hard, less permeable granite. It then flows laterally until it encounters a low point in the topography, emerging as a spring. Some springs are fairly subtle, not thunderous, and are called seeps. This seep has a yellowish color because the rocks are naturally sulfur-rich.

How Are Lakes Related to Groundwater?

Lakes can have various relationships to groundwater. Most lakes occur where the water table intersects the ground surface, but some have a different setting. Most wetlands represent the interaction between rainfall, surface water, and groundwater and may be nourished by groundwater flow.

1. Some lakes are perched above the water table. These lakes can be transient, lasting only a short time after precipitation. A perched lake can be permanent if the inflow of water into the lake is at least equal to the amount lost by outflow to the ground, by evaporation to the air, or by other means.

2. Most lakes mark where the water table intersects and rises above the land surface. A lake can be fed entirely or partially by inflow of groundwater.

3. Many lakes are along the bottoms of valleys where groundwater is commonly close to or at the surface. Such lakes may be nearly in equilibrium with the adjacent groundwater, neither gaining nor losing water.

4. Wetlands can form peripheral to lakes, commonly at the same level as the water table. Other lakes are perched on uplands that contain clay or other less permeable material  close to the surface. The low permeability can trap precipitation and runoff, slowing the infiltration of water into the ground, forming a wetland from the ponded water.

How Do Streams Interact with the Water Table?

Water in many small rivers and streams decreases to a trickle and entirely disappears farther down the drainage. In other cases, a stream will flow even though there has not been rain or snowmelt in a long time — what is the source of this water? These occurrences are a result of interactions with groundwater.

2. Other channels flow across an area where the water table is at some depth below the surface. The part of the stream that loses water from outflow to groundwater is said to be losing or to be a losing stream or losing river. The red arrows show that groundwater below the water table flows down and away from the channel.

3. Some losing streams and rivers disappear when they cross from hard, less permeable rocks to softer, more permeable materials. The water seeps into the ground, where it may continue to flow at a shallow depth in the loose sand and gravel in the basin. 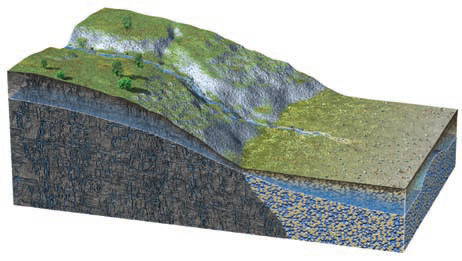