Where Does Water Occur on the Planet?

WATER IS ABUNDANT ON EARTH, occurring in many settings. Most water is in the oceans, but is salty. Most fresh water is in ice and snow or in groundwater below the surface, with a smaller amount in lakes, wetlands, and streams. Water also exists in plants, animals, and soils and as water vapor in the atmosphere.

Where Did Earth’s Water Come from and Where Does It Occur Today?

Most water on Earth probably originated during the formation of the planet or from comets and other icy celestial objects that collided onto the surface. Over time, much of this water moves to the surface, for example when magma releases water vapor during eruptions.

Oceans — Of Earth’s total known inventory of water, an estimated 96.5% occurs in the oceans and seas as saline (salty) water. The remaining 3.5% is fresh water held in ice sheets and glaciers, groundwater, lakes, swamps, and other water features on the surface.

Streams — Streams are extremely important to us and are the main source of drinking water for many areas. They contain, however, only a very small amount of Earth’s fresh water.

Lakes — Water occurs in lakes of various sizes. Many are freshwater lakes, but those in dry climates are saline or brackish (between fresh and saline). Lakes contain a majority of the liquid fresh water at Earth’s surface, but most of this water lies in a few large lakes around the world.

Swamps and Other Wetlands — These wet places contain water lying on the surface and within the plants and shallow soil. They constitute about 11% of the liquid fresh water on the surface.

Atmosphere — A small, but very important, amount of Earth’s water is contained in the atmosphere (0.001%). It occurs as invisible water vapor, as water droplets in clouds, and as rain, falling snow, and other types of precipitation. 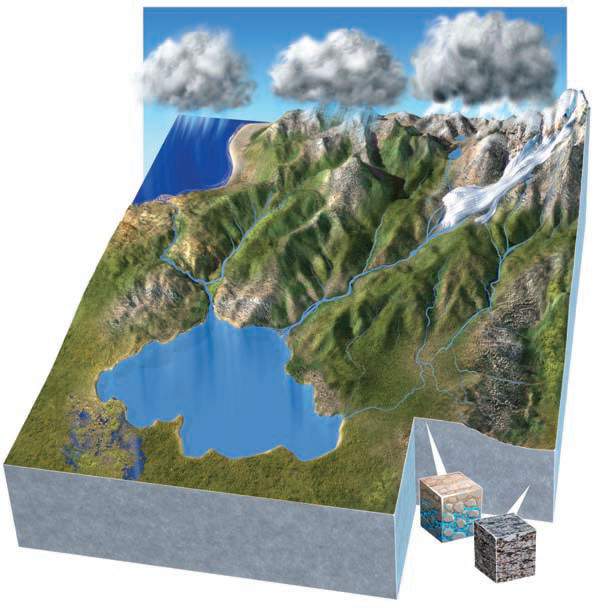 Glaciers — Nearly 69% of Earth’s fresh water is tied up in ice caps, glaciers, and permanent snow. A small amount also exists in permafrost and ground ice.

Biological Water — Water is also within the cells and structures of plants and animals. It is clearly important to us but represents an exceptionally small percentage of Earth’s total water (0.0001%).

Deep-Interior Waters — An unknown, but perhaps very large amount of water is chemically bound in minerals of the crust and mantle. Some scientists think Earth’s interior may contain more water than the oceans.

These bar graphs show estimates of the distribution of water on Earth’s surface and the uppermost levels of the crust. The left bar shows that the oceans contain 96.5% of Earth’s total free water (water that is not bound up in minerals), but this water is saline. Only 3.5% of Earth’s water is fresh. These graphs do not include water in Earth’s atmosphere or deep interior.

The middle bar shows that most of Earth’s fresh water occurs in ice caps and glaciers. Almost all the rest is groundwater. Less than 1% occurs as liquid surface water in lakes, swamps, and streams.

The right bar shows where Earth’s small percentage of fresh, liquid, surface water resides. Most is in lakes, followed by swamps and streams.

How Does Water Move from One Setting to Another?

Water is in constant circulation on Earth’s surface, moving from ocean to atmosphere, from atmosphere back to the surface, and in and out of the subsurface. The circulation of water from one part of this water system to another, whether above or below Earth’s surface, is called the hydrologic cycle. From the perspective of living things, the hydrologic cycle is the critical system on Earth. It involves a number of important and mostly familiar processes. It is driven by energy from the Sun.

Evaporation — As water is heated by the Sun, some of its molecules become energized enough to break free of the attractive forces binding them together. Once free, they rise into the atmosphere as water vapor.

Condensation — As water vapor cools, as when it rises, it condenses into a liquid or turns directly into a solid (ice, hail, or snow in deposition). These water drops and ice crystals then collect and form clouds.

Precipitation — When clouds cool, perhaps when they rise over a mountain range, the water molecules become less energetic and bond together, commonly falling as rain, snow, or hail, depending on the temperature of the air. Precipitation may reach the ground, evaporate as it falls, or be captured by leaves and other vegetation before reaching the ground.

Sublimation — Water molecules can go directly from a solid (ice) to vapor, a process called sublimation (not shown here). Sublimation is most common in cold, dry, and windy climates, such as some polar regions.

Infiltration — Some precipitation seeps into the ground, infiltrating through fractures and pores in soil and rocks. Some of this water remains within the soil, and some rises back up to the surface. Water can also infiltrate into the ground from lakes, streams, canals, or any body of water. 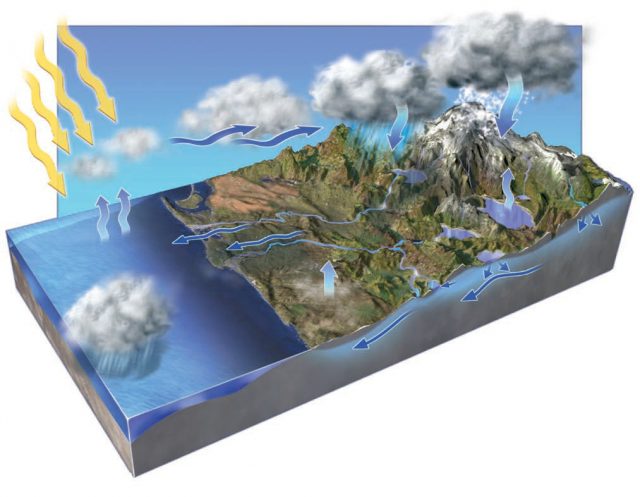 Groundwater Flow — Water that percolates far enough into the ground becomes groundwater. Groundwater can flow from one place to another in the subsurface, or it can flow back to the surface, where it emerges in springs, lakes, and other features. Such flow of groundwater may sustain these water bodies during dry times.

Ocean Gains and Losses — Most precipitation falls directly into the ocean, but oceans lose much more water to evaporation than they gain from precipitation. The difference is made up by runoff from land, keeping sea level close to constant.

Surface Runoff — Rainfall or snowmelt can produce water that flows across the surface as runoff. Runoff from direct precipitation can be joined by runoff from melting snow and ice and by groundwater seeping onto the surface. The various types of runoff collect in streams and lakes. Most is eventually carried to the ocean by streams where it can be evaporated, completing the hydrologic cycle.

Transpiration — Some precipitation and soil water is taken up by root systems of plants. Through their leaves, plants emit water that evaporates into the atmosphere by the process of transpiration.