How Can Water Become Contaminated?

CONTAMINATION OF SURFACE- AND SUBSURFACE-WATER SUPPLIES is a major problem facing many communities. Some contaminants are natural products of the environment, whereas others have human sources, the direct result of our modern lifestyle. What are some main sources of water contamination?

1. Examine this figure, trying to recognize every potential source that could contaminate surface water and groundwater. Then read the accompanying text blocks.

2. Water contamination can have natural causes. Weathering of rocks releases chemical elements into surface water and groundwater — some of these elements are beneficial and others are not. Rocks, especially those that have been mineralized by hot fluids, may contain lead, sulfur, arsenic, or other potentially hazardous elements. Mining activities and natural erosion move mineralized rocks away from where they formed, further spreading these contaminants.

3. We use large amounts of petroleum and coal, which have to be discovered, extracted, transported, and processed. Any of these activities potentially cause pollution. Some of
the worst disasters are leaks from pipelines and supertankers, and fires at refineries and storage tanks. 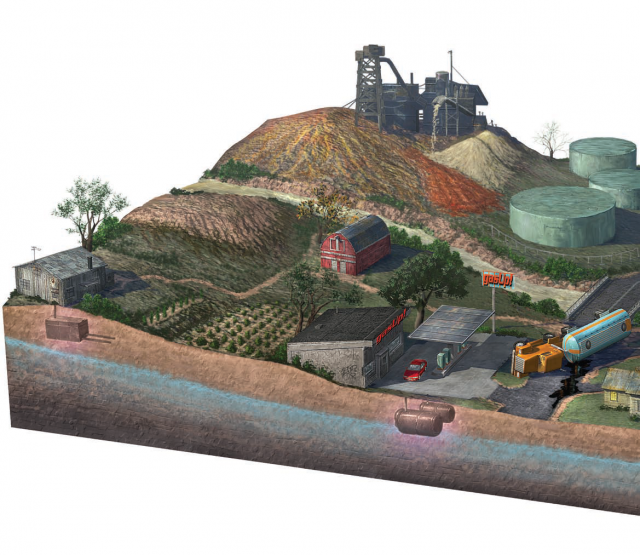 4. Old landfills are the repository for countless discarded items, many of which contain hazardous substances. Such items include diapers, lead batteries, toxic liquids from  household or commercial use, compact fluorescent bulbs, old tires, and other garbage. If not properly sited and sealed from the environment, landfills can be major sources of pollution. Landfills along rivers, such as this one, can be breached by lateral erosion of channels. Supposedly impermeable linings beneath the landfill, if installed at all, can crack during settling and from daily landfill operations, allowing a toxic stew to seep into the underlying groundwater.

5. One of the most basic types of contamination is human waste, which can end up in surface-water and groundwater supplies if proper sanitary procedures are not followed. Contamination of this sort comes from septic tanks, accidental spills from wastewater treatment facilities, or, in less affluent parts of the world, from waste disposal in open sewers and trenches.

6. Farms, ranches, and commercial orchards are contributors of chemical and organic contamination. Chemical contaminants include fertilizers that contain nitrates, insecticides to control pests, herbicides to combat invasive weeds, and defoliants to remove leaves before harvesting crops like cotton. Irrigated fields build up salts as water evaporates, and much of this gets carried into ditches by excess irrigation water. Animal waste, which contains harmful bacteria, hormones, and feed additives, is also a potential problem.

7. Gas stations contaminate water because of leaks from underground storage tanks and spills that occur while filling vehicles. Gas stations frequently go out of business if they have to dig up leaking underground storage tanks, often leaving the leaky tanks behind. Spills from tanker trucks, railroad cars, and trucks delivering fuel from distribution hubs may cause water contamination if there is an accident.

8. To manufacture the items we use in our daily lives, factories use many different raw materials and chemicals. Plastic products, for example, are everywhere around us:  containers for soda and bottled water, plastic bags for groceries and other purchases, and many parts of our cars. These plastics are mostly produced from petroleum, which must be refined and processed in refineries and plastic factories. Petroleum and various chemicals, along with the waste produced during the manufacturing process, can accidentally escape, as shown in this photograph, causing an industrial site to become heavily contaminated. Liquid contamination may be pumped down “disposal wells,” often ending up in the groundwater. Ponds intended for temporary storage can leak, contaminating surface water and groundwater. Fumes and particles emitted from smokestacks settle back to the ground or are washed down by rain and snowfall, possibly contaminating air, plants, buildings, soils, surface water, or groundwater. 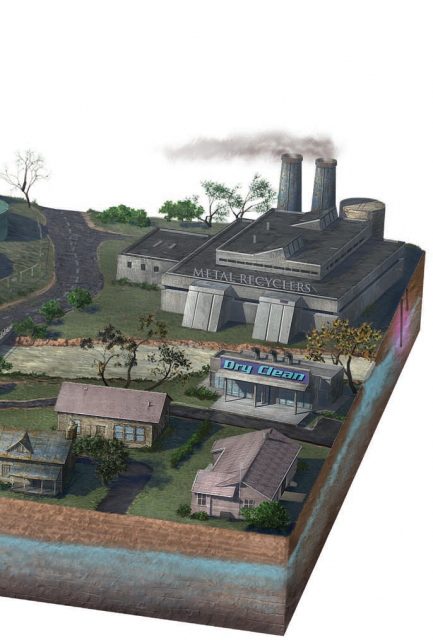 9. Even if a community is careful with wastes, contamination can be carried into the area by streams that drain polluted areas upstream. Polluted surface water can seep into groundwater, and groundwater inflow can pollute streams. Soils can contaminate water, which then pollutes the next town downstream.

10. In the past, dry cleaners were sources of groundwater pollution because of the chemical solvents used to clean clothes without water. Such solvents have names from organic chemistry and commonly are referred to by their abbreviations, such as PCE for per chloroethylene (“perc” for short). Today, such chemicals are no longer necessary.

11. Houses cause water pollution during the production of the materials used to build the house, from actual construction, and from day-to-day activities that include the use of  fertilizer, termite treatment, and household pesticides. Oil and gas spilled from cars and other machines, along with oil improperly disposed of during do-it-yourself oil changes, can contaminate large volumes of fresh water.

12. We may be unaware of water contamination. Subsurface rock and sediment can contain hazardous natural substances, including metallic elements and radon. We may discover the contamination only if we drill into it, often because an unusual health issue appears in a local population.

Bangladesh, east of India, is a geographically challenged country. Much of it consists of lowlands that are easily flooded by high seas and the Ganges, one of the world’s largest rivers.

One of Bangladesh’s worst problems, however, is water contamination. For centuries, poor sanitation in this impoverished nation polluted the streams and other surface-water sources with cholera, dysentery, and other diseases. To provide a new source of water, people sank more than 10 million tube wells (created by pounding tubes into the soft sediment). Unfortunately, the sediment and groundwater have a high content of naturally derived arsenic, many times the recommended limit, causing arsenic poisoning on a scale never before seen. To help solve the problem, scientists from the U.S. and Bangladeshi governments have been sampling well waters, studying the surface and subsurface materials, drilling wells into a deeper aquifer, and evaluating whether bacteria can be used to reduce arsenic concentrations.