What Problems Are Associated with Groundwater Pumping?

THE SUPPLY OF GROUNDWATER IS FINITE, so pumping too much groundwater, a practice called overpumping, can result in serious problems. Overpumping can cause neighboring wells to dry up, land to subside, and gaping fissures to open across the land surface.

What Happens to the Water Table if Groundwater Is Overpumped?

Demands on water resources increase if an area’s population grows, the amount of land being cultivated increases, or open space is replaced by industry. Groundwater is viewed as a way to acquire additional supplies of fresh water, so new wells are drilled or larger wells replace smaller ones when more water is needed.

1. A simple case illustrates the problems with overpumping. The two figures below show what Minor Groundwater Withdrawal happens when an unconfined aquifer is pumped, first by a small-volume pump and later by a larger pump. The topography of this area is fairly flat, there are no bodies of surface water, and a single type of porous and permeable sediment composes the subsurface.

2. As people move into a nearby town, they drill a small well down to the water table to provide fresh water. The small well pulls out so little groundwater that the water table remains as it has for thousands of years, nearly flat and featureless. The well remains a dependable source of water because its bottom is below the water table.

4. As more people move into the surrounding area, they drill a larger well to extract larger volumes of water to satisfy the growing demand. The new, larger well pumps water so rapidly that groundwater around the well cannot flow in fast enough to replenish what is lost. This causes the local water table to drop, forming a funnel-shaped cone of depression around the well.

6. The original small well dries up because it no longer reaches the water table, which has been lowered by the larger well’s cone of depression. A cone of depression is common around nearly all wells, but a large cone of depression, caused by overpumping of the aquifer, can have drastic consequences. It can dry up existing wells, change the direction of groundwater flow, and contaminate wells. In addition, overpumping can dry up streams and lakes, if they are fed by groundwater, or cause the roofs of caves to collapse. Effects similar to those described above can also occur in a confined aquifer.

What Other Problems Are Caused by Excessive Groundwater Withdrawal?

Overpumping can cause the ground surface to subside if sediment within the underlying aquifer is dewatered and compacted. In certain settings, subsidence causes fissures to open on the surface.

1. Many areas have settings similar to this one: mountains composed of bedrock flank a valley or basin underlain by a thick sequence of sediment. Most water is pumped from beneath the sediment-filled basin and used by people in the valleys.

2. Bedrock has interconnected fractures that give it some permeability, but it has a much lower overall porosity than sediment in the basin.

3. The water table slopes from the mountains toward the basin, across the boundary between bedrock in the mountains and sediment beneath the valley.

4. If we overpump groundwater, the water table can drop over much of the area. In some real-world cases it has dropped more than 100 m (~330 ft).

5. As the water table drops, the upper part of the original aquifer is now above the water table and has been dewatered. Sediment within and below the dewatered zone compacts because water pressure no longer holds open the pore spaces.

6. Compaction of the sediment causes the overlying land surface to subside by several meters. Once the sediment compacts, the subsidence and loss of porosity are both permanent and will not be undone if pumping stops and water levels rise again. On the left, a telephone pole in the San Joaquin Valley of California bears signs marking elevations of the land surface during subsidence — the land surface has dropped many meters. Along the coast, such subsidence could lower an area below sea level.

7. The granite cannot compact, so open fissures develop across the land surface along the boundary between land that subsided and land that did not (in the mountains). The earth fissure pictured here formed by this type of subsidence.

How Can Groundwater Pumping Cause Saltwater Intrusion into Coastal Wells?

Some wells are by necessity near the coasts of oceans and seas. These wells have a special threat — overpumping can draw salt water into the well, a process referred to as saltwater incursion or saltwater intrusion. 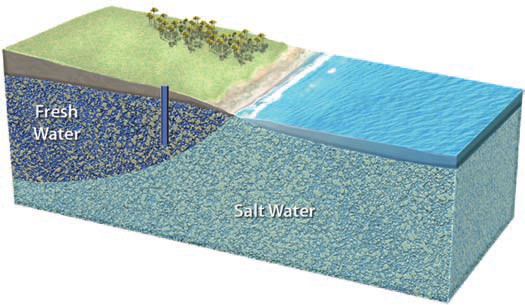 Along ocean coasts, fresh water com monly underlies the land, while groundwater beneath the seafloor is salty. Fresh water is less dense than salt water and forms a lens floating on top of salt water. 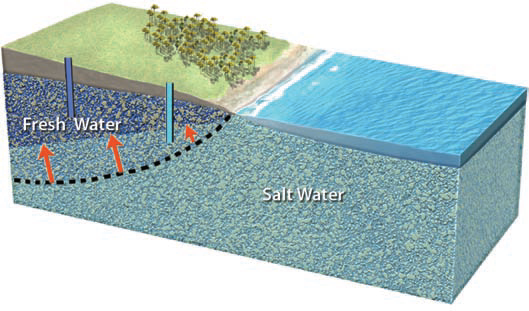 When wells on land are overpumped, the interface between fresh water and salt water moves up and inland (saltwater incursion). Wells closest to the coast will begin to pump salt water and will have to be shut down.