How and Where Does Groundwater Flow?

GROUNDWATER FLOWS BENEATH THE SURFACE in ways that are controlled by several key principles. The direction and rate of groundwater flow are largely controlled by the porous nature of the materials, the slope of the water table, and the geometry and nature of the subsurface rock. Some rock types allow easy groundwater flow, whereas others prevent significant movement.

What Is the Geometry of the Water Table?

The water table defines the boundary between unsaturated and saturated rock and sediment. It usually is not a horizontal surface but instead has a three-dimensional shape that mimics the shape of the overlying land surface. The shape of the water table commonly has slopes, ridges, hills, and valleys. These features control which way groundwater flows.

What Controls the Rate of Groundwater Flow?

The rate of groundwater flow is typically measured in meters per day, but can be much slower. Rate is primarily controlled by permeability, a material’s ability to transmit fluid, which can vary greatly from one material to the next. The rate is controlled to a lesser extent by the steepness of the water table because flow is driven by gravity. Other factors being equal, water flows faster down  a steep water-table slope and slower down a more gentle one. The slope of the water table is called 08.06.b1 the hydraulic gradient. 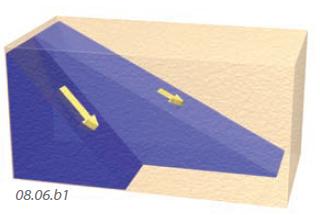 The rate of groundwater flow is strongly controlled by the permeability of the rock type. In this diagram, flow is fastest in this highly permeable rock layer. Flow is moderately fast in a somewhat less permeable layer. Flow is slowest in layers that have a very low permeability. 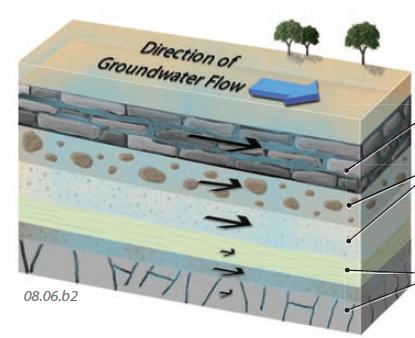 What Is an Aquifer?

An aquifer is a large body of permeable, saturated material through which groundwater can flow well enough to yield significant volumes of water to wells and springs. To be a good aquifer, a  material must have high permeability.

How Are Wells Related to the Water Table?

A well is a hole dug or drilled deep enough to intersect the water table. If the well is within an aquifer, water will fill the open space to the level of the water table. This free-standing water can be  drawn out by buckets or pumps.

In dry seasons, or during periods of high groundwater use, some wells run dry. This occurs when the water table drops and the well was not drilled deep enough into the aquifer.

A perched water table sits above the main water table and generally forms where a discontinuous layer or lens of impermeable rock blocks and collects water infiltrating into the ground. Perched water bodies can make it difficult to predict the best site to drill an adjacent well. 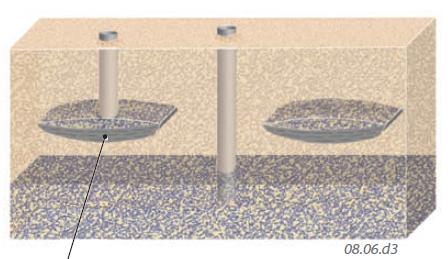 We often hear the word artesian in the context of bottled water or certain beverages. What does this term imply? Does it mean that the water is better tasting, more natural, or more healthy? The short answer to these three questions is no, or at least not necessarily. 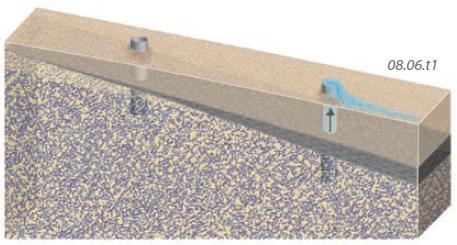 The term artesian means that groundwater is in a confined aquifer and is under enough water pressure that the water rises some amount within a well. The water does not have to reach the surface for the well to be called artesian, but many artesian systems have enough pressure to force the water all the way to the  surface, creating a well or spring. Although it is a catchy advertising term, the term artesian is not indicative of how the water tastes, whether it is more natural than other types of groundwater, or whether it is healthy. It only means that the groundwater is confined and under pressure, and as a result rises some amount in the well.