How Does Groundwater Contamination Move and How Do We Clean It Up?

WATER CONTAMINATION CAN BE OBVIOUS OR SUBTLE. Some streams and lakes have oily films and give off noxious fumes, but some contamination occurs in water that looks normal and tastes normal but contains hazardous amounts of a natural or human-related chemical component. How does contamination in groundwater move, how do we investigate its causes and consequences, and what are possible remedies?

How Does Contamination Move in Groundwater?

As contamination enters groundwater, it typically moves along with the flowing groundwater. Contamination can remain concentrated, can spread out, or can be filtered by passage through sediment and rocks.

Groundwater contamination typically moves with the groundwater down the slope of the water table. 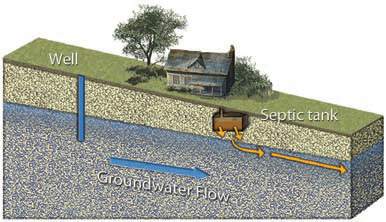 Contamination from this septic tank will move to the right, away from the well. The direction of groundwater flow is clearly important in deciding where to put the septic tank relative to the well.

Contamination is drawn out parallel to the direction of groundwater flow. 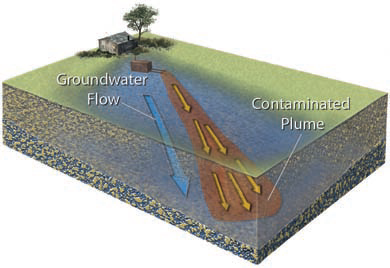 Diffusion and mixing spread the contaminated zone as it migrates away from the source. Consequently, the shape of most contamination spreads out like smoke from a chimney and is called a plume.

Some contamination can be naturally filtered by materials through which the contaminated groundwater flows. 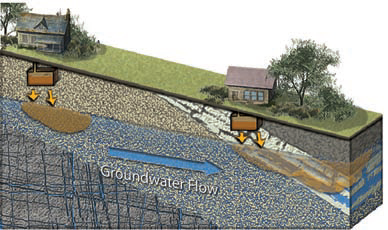 How Do We Investigate Groundwater Contamination?

Hydrogeologists investigate groundwater and surface-water contamination using the same approaches they use for other types of water-related geologic problems, plus a few extra strategies.

1. Most surface-water and groundwater contamination is recognized by chemical analyses done by community water providers. In the U.S., water standards are set by the Environmental Protection Agency (EPA). This table lists the EPA drinking water standards for a few of the better known or more hazardous water contaminants. Values are in milligrams per liter (mg/L), which is equivalent to parts per million (ppm). A standard of 0.1 mg/L for chromium means that drinking water is above the limit if it contains more than about 1 atom of chromium for every ten million molecules of water.

2. Water contamination is fundamentally about chemicals and hazardous microbes, so geochemists collect geochemical samples that are analyzed either in the field or later by chemists in a laboratory. Some volatile organic compounds are detected using sensors that analyze soil gases given off by the soil.

3. Hydrologists conduct tests of an aquifer by pumping a well continuously at a specific rate and observing how that well and wells around it react during the pumping and after the pumps are turned off. This provides information about how fast groundwater and contamination might move.

How Is Groundwater Contamination Tracked and Remediated?

Once groundwater contamination is identified, what do we do next? Hydrogeologists compile available information to compare the distribution of contamination with all relevant geologic factors. One commonly used option to clean up, or remediate, a site of contamination is called “pump-and-treat.” Some contamination can be mostly remediated, but remediation is much more expensive than not causing the problem in the first place.

2. In this area, contamination consists of chromium released by a chromeplating shop. The water table slopes to the southeast, so this is the direction in which the upper levels of groundwater will flow. We predict that contamination will move in this same direction. 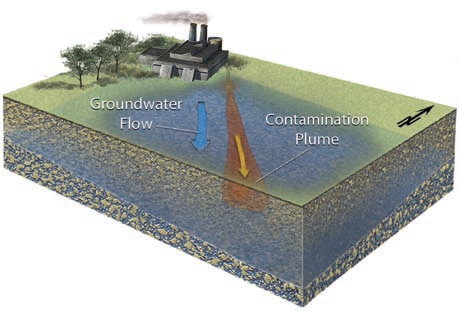 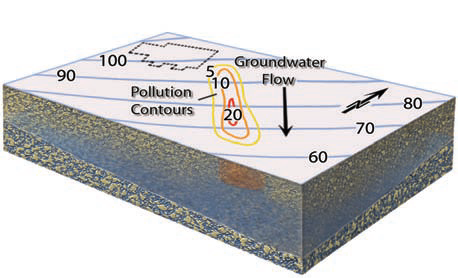 6. From these maps, we can now determine where the contamination is, which way it is moving, and where it will go in the future (down the slope of the water table). If from interviews or historical records we can determine how long ago the contamination occurred, we can use simple calculations (distance/time) to get the rate of flow. We can also use computer simulations to model past and future movement. 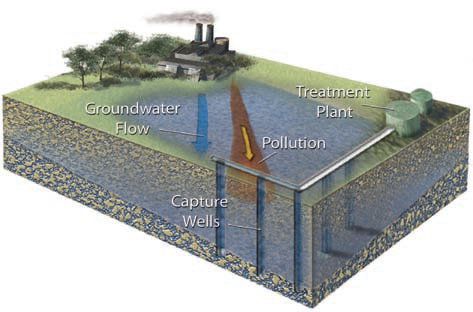 7. Finally, we try to clean up the contamination. One strategy is to drill wells in front of the projected path of the contamination to contain, capture, and extract the contaminated
water. Pumping brings contaminated water to the surface, where it is processed with carbon filters or other appropriate technology to separate the contaminant from the water. The cleaned water is typically reinjected into the ground, evaporated in evaporation ponds, or channeled so as to flow into nearby streams.

Woburn, Massachusetts, a small town 16 km (10 mi) north of Boston, was the site of a classic legal case involving groundwater contamination. The case was made famous in the book A Civil Action by Jonathan Harr and in a movie of the same name starring John Travolta.

The trouble began in the 1960s when the city drilled two new groundwater wells for municipal water supplies. The wells were drilled into glacial and river sediments that had filled an old valley. After the wells were installed, some residents complained that the water tasted odd and had a chemical odor. Over the next 20 years, residents began to show a high incidence of leukemia and other serious health problems. Chemical analyses showed that the groundwater was contaminated with trichloroethylene (TCE) and other volatile organic compounds. Local families filed a lawsuit against several chemical companies that were potentially responsible. The verdict remains complex, but the site is a classic example of the interaction of physical geography, water, health, and environmental law.