THE AMOUNT OF WATER VAPOR in the air is referred to as humidity. Humidity is something we can sense, affecting whether the air feels humid or dry. We are most familiar with one measure of humidity — relative humidity, a term commonly used on daily weather reports. There are other measures of humidity, some of which are more useful for comparing the amount of moisture between different elevations, times, and regions. Understanding humidity leads to a much better understanding of weather and climate.

What Are Humidity and Vapor Pressure? 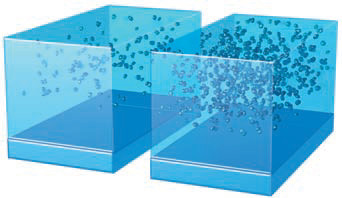 2. In the example shown here, the cube on the right has more water vapor than does the left cube, so the air in the right cube has a higher humidity than does air in the left cube. If we captured and weighed all the water vapor in either cube, we could determine how much water vapor was in that volume of air. Such a measure, called absolute humidity, is in units of mass per volume, such as grams per cubic meter (g/m3). Since this value changes as air expands or compresses (changes in volume), as commonly occurs in the atmosphere, absolute humidity is not a very useful measure in understanding the atmosphere. 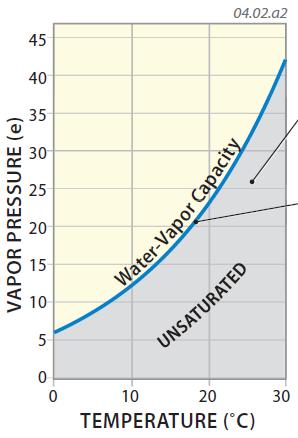 5. If the conditions of temperature and vapor pressure for some volume of air plot in the shaded area on this graph, even more water vapor can exist in the air and the air is unsaturated. These are the conditions we normally experience when the weather is fair (not raining or snowing).

6. If the conditions plot directly on the blue line, the air has as much water vapor as possible — it is saturated with respect to water vapor. Under these conditions, the water vapor begins to form droplets via the process of condensation or ice crystals via the process of deposition. In other words, when the atmosphere reaches saturation, drops of water form, such as in clouds and fog, perhaps followed by precipitation. In certain settings, conditions can be above the blue line, and the air is said to be supersaturated.

7. A common way to convey humidity is to express it as a ratio of how much water vapor is in the air relative to the maximum amount of water vapor that is possible (i.e., the water-vapor capacity). In the graph below, the green dot represents a vapor pressure of 20 mb and a temperature of 29°C. At that temperature, saturation would occur at about 40 mb, so the vapor pressure (humidity) represented by the green dot is half, or 50% of the maximum possible. The atmosphere is unsaturated in this case. This percentage, representing the observed vapor pressure divided by the maximum possible vapor pressure (i.e., water-vapor capacity), is the relative humidity, the term we hear on daily weather reports. Relative humidity varies from single digits (e.g., 5%) in very dry places, such as dry seasons in a desert, to 90% to 100% in very humid conditions. 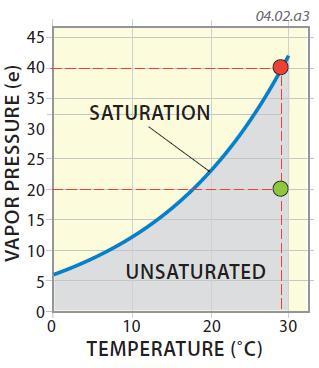 What Is Specific Humidity?

Relative humidity helps describe how humid the air feels to us and indicates how close the air is to saturation, but relative humidity varies with temperature, even if the amount of water vapor in the air has not changed. Therefore, we also use another measurement of humidity, called specific humidity, which compares the mass of water vapor in a body of air to the total mass of that air. An advantage of this approach is that a specific-humidity measurement is not affected by changes in temperature, pressure, and volume that occur when air masses move, such as up or down in elevation. Specific humidity, therefore, is a convenient way of comparing the amount of moisture at different elevations, at different times, and from region to region.

2. This cube contains molecules of water vapor (shown as blue dots) dispersed through a mass of atmosphere (filling the rest of the cube). In this example, the mass of all the water vapor is 12 grams (g), and the total mass of the air (including the water vapor) is 1 kilogram (kg). The specific humidity is therefore the following ratio:

3. The calculated specific humidity of 12 g/kg is a typical value for the air. We use the units of g/kg because the amount of water vapor is small compared to the total amount of air. 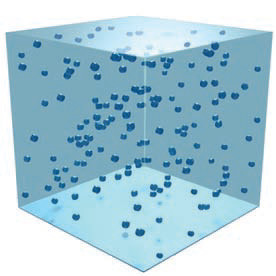 5. This graph plots specific humidity and temperature, with the blue line showing conditions where air is saturated with water vapor. The curve has the same shape as the curves on the other page because it also represents water-vapor capacity. It curves strongly upward with higher temperatures. The curve does not show how specific humidity of an air mass varies with temperature, only the conditions under which it becomes saturated. The shaded field represents conditions where air is unsaturated (can evaporate even more water vapor). 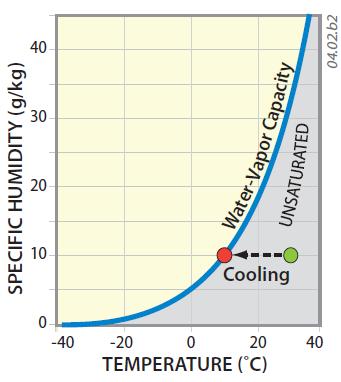 7. The green dot represents air that has a specific humidity of 10 g/kg and a temperature of 30°C. If we cool the air (moving left on the graph), the air can reach saturation (the red dot), but note that the specific humidity does not change, because it is a ratio of masses. Seen in this way, the air's ability to evaporate moisture does change with temperature (the blue curve), but specific humidity tells us the concentration of water vapor in the air, independent of temperature. For this reason, specific humidity is very useful for comparing the moisture content of air in different settings.