What Processes Affect Ocean Temperature and Salinity in Tropical and Polar Regions?

THE EXTREMES IN SEAWATER TEMPERATURE AND SALINITY occur at high and low latitudes. The warmest and most saline waters occur in the tropics and subtropics, while very cold, less saline waters occur near the poles, away from where ice is actively forming. Here, we examine the processes occurring in some of the warmest and coldest parts of the ocean to illustrate how these important end members affect the planet's oceans and the planetary system.

What Are Warm Pools and How Are They Formed?

1. Within Earth's oceans are regions where the water temperatures are higher than in adjacent regions, and these warm regions persist, or re-form, year after year. These regions of warm seawater are called warm pools. The figure here illustrates how they are formed and maintained.

3. Warm, rising air carries large quantities of water vapor into the troposphere. It cools adiabatically but more slowly than the air around it and therefore continues to rise due to instability, forming very deep convection.

4. Deep convection over tropical and equatorial regions leads to the release of latent heat and an expansion of the troposphere, causing the  ropopause to be higher (17–18 km) over the tropics than over the rest of the planet. At these heights, surrounding temperatures are as low as –85°C.

5. Air at the tropopause and in the lower stratosphere is very cold with extremely low moisture content (4 parts per million). It is no longer less dense than air around it since the stratosphere has a temperature inversion. Thus, air moves laterally toward the poles (the yellow arrow) as if along an invisible ceiling.

6. Air moves horizontally across the ocean surface to replace the unstable rising equatorial air, bringing water vapor evaporated from the subtropical regions, where evaporation exceeds precipitation. Once in the tropics, the air rises, condenses, and releases latent heat, which was derived from the subtropics. The tropics therefore accumulate excess energy, to be released in this restricted area of rising air and instability. The ocean warms, forming a warm pool.

Location and Influence of Warm Pools

7. These two globes show SST, but they focus on areas of warm pools, which occur in the warmest waters, those shaded red and orange.

8. Earth's largest warm pool is represented by the very warm waters near Southeast Asia, broadly between China and Australia. The warm pool is centered on the shallow seas that are partially enclosed by the islands of Indonesia; these are the world's warmest seas. Warm waters in this region also extend into the adjacent Indian Ocean, so this warm pool is commonly called the Western Pacific Warm Pool. 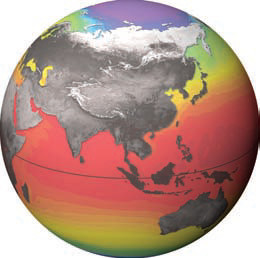 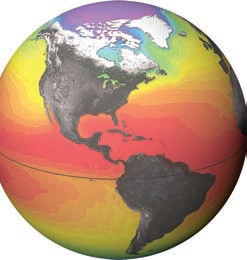 10. The warm waters of the Western Pacific Warm Pool sustain rich and diverse life. These seas are famous for their coral reefs and clear, warm waters, stretching from Indonesia to east of the Philippines, in the island Republic of Palau. 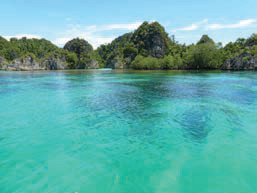 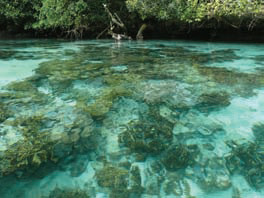 11. The Western Atlantic Warm Pool forms the warm waters of Caribbean vacation spots, like the Florida Keys, the Cayman Islands, and beaches near
Cancun, Mexico. 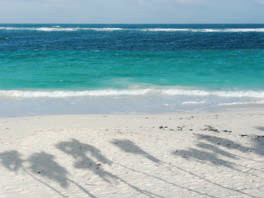 What Processes Occur Around the Poles?

1. In terms of temperatures and humidity, the poles are the exact opposites of a warm pool. Here, we explore the processes near the poles, using a simple example where the entire polar region is ocean (no land).

2. Cold air aloft moving poleward is extremely dry. Near the pole, it subsides and warms adiabatically. The combination of extremely low moisture contents and warming results in very few clouds.

3. The lack of water vapor and clouds encourages the loss of outgoing longwave radiation. When combined with the sinking and warming air, this creates a very stable atmosphere due to a near-surface temperature inversion (warmer air over cooler air), which inhibits cloud formation and precipitation. 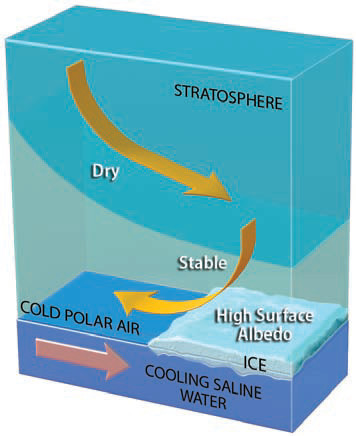 5. The formation of ice on the surface of the polar oceans increases the salinity of the underlying waters, turning them into brine — very saline water. This and the very cold water temperatures increase the density of the surface waters to the point that they attain a higher density than that of the deep ocean waters below them, causing surface water to descend unstably.

6. As the dense, polar waters descend, surface waters from lower latitudes flow toward the poles to replace them. This flow of dense saline waters downward, and their replacement by poleward surface flows of warmer water, sets up circulation involving both the shallow and deep waters.

7. At the same time, cold polar air blows outward across the surface away from the pole, to ultimately replace the warm rising air at the equator. In this way, the oceans and atmosphere are both moving energy and material toward and away from the poles. 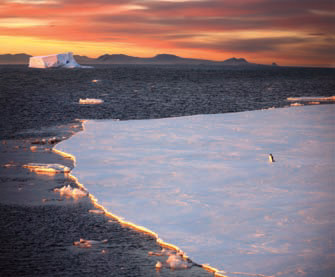 8. Ice shelves of Antarctica gain ice in three main ways, all of which result in ice that is fresh, not saline: (1) freezing of seawater below but excluding salt (called brine exclusion), (2) flow of glaciers from land to sea, and (3) snowfall and windblown snow on top. Brine exclusion makes adjacent water more saline, but melting of ice will release fresh water, decreasing the salinity. The resulting salinities indicate the relative contributions of freezing versus melting. The photograph to the right is of an ice shelf in Antarctica, but taken looking up at its underside, with a cooperative jellyfish for scale. 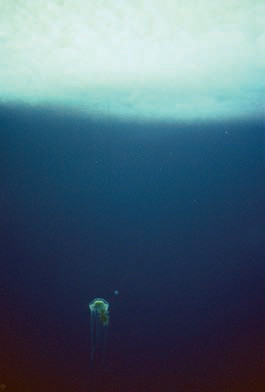 9. Iceland is a large island in the north Atlantic Ocean. As are most regions at such high latitudes, Iceland is very cold. It is cloudier and stormier than most Arctic places, however, because of the effect of the Gulf Stream, which brings warmer water and moist air farther poleward than is typical. 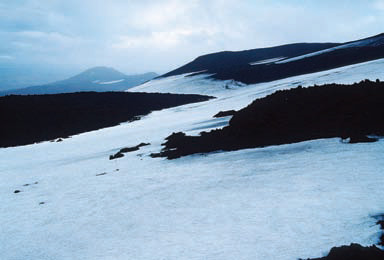 10. Many scientists believe that this global-scale connection between the poles — along with feedbacks between the oceans, atmosphere, and cryosphere — is responsible for the abrupt changes (vertical gray lines) in climate recorded by ice cores from Greenland and Antarctica. Rapid drops in Greenland temperatures are strongly associated with simultaneous Antarctic warming. These changes occur over short geologic time periods of one to two thousand years, but not as fast as Hollywood would have us believe.