How Does the Surface Affect the Rising of Air?

EARTH'S SURFACE CONSISTS OF A VARIETY OF MATERIALS, including bare rock, soils, forests, cities, water, and ice. Each of these materials responds differently to insolation and to changes in temperature and humidity of the adjacent air. In turn, these surface materials can affect the temperature and humidity of that air. On land, these materials are referred to as land cover. Some changes in land cover are natural and others are caused by humans.

The amount of energy reflected and absorbed by different land surfaces varies and depends on several factors, including the type of land cover. Human modification of the land surface, especially changes in land cover, can affect the temperature of the land and overlying air. This can cause the environmental lapse rate to change, influencing whether air rises and affecting the stability of the local atmosphere.

1. Various human activities greatly affect the surface of the Earth and  the type of land cover. One ongoing problem is deforestation, where native forests and other vegetation are cut down and removed as part of development. In deforestation, dark forest cover and other natural vegetation are often replaced with less heavily vegetated farms with abundant bare soil. The loss of plant cover commonly increases surface temperature by reducing shading and because insolation goes into heating the ground, rather than into evaporating water that was transpired by the forest. In developed land, vegetated areas are removed and drainage systems remove standing water. Thus, after development, more of the incoming energy is used in sensible heating and less is stored as latent heat. 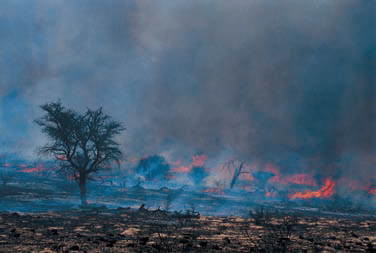 2. Another major change in land cover occurs during urbanization, where natural lands, farms, and parks are replaced by asphalt, concrete, and buildings during the growth of cities and towns. Many aspects of development, including urbanization, cause a change in albedo (what percentage of insolation is reflected back into the atmosphere) and in the heat-retention characteristics of the land cover. If darker, roughertextured materials are replaced with lighter colored, smoother-textured ones, the albedo increases, and more insolation is reflected off the surface. Often, however, dark asphalt and other materials more effectively absorb insolation, heating up more during the day and giving back this heat in the evening, raising city temperatures, forming a warmer overall environment, called an urban heat island (UHI). 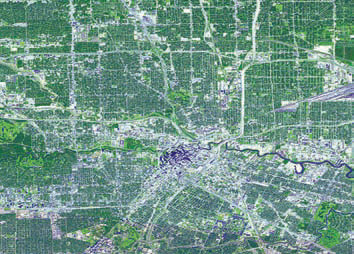 Effects of Development on Atmospheric Stability

3. Changes in land cover due to development can result in changes to surface temperatures and therefore to environmental lapse rates. In the figure below, an area of land originally consisted of natural vegetation, with trees and grass, and a small pond. After development, the same area was covered with asphalt, concrete, and bare dirt.

4. Deforestation and urbanization both occurred in this area, so we predict that more insolation will become sensible heat and less will be latent heat. This should cause more heating of the land surface, resulting in higher surface temperatures, both during the day and especially at night, as part of UHI. If the surface temperature increases but the temperature higher in the atmosphere does not change as much, there will be a steeper environmental lapse rate — a larger decrease in temperature from the surface upward to some height. 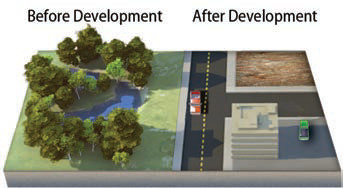 5. We can represent these changes with a graph showing changes to surface temperatures and environmental lapse rates. The graph shows the environmental lapse rate in green and the unsaturated adiabatic lapse rate in red, for times before development and after development. Examine this graph, note the changes between the two times, and consider what the implications might be for this somewhat extreme example (temperature changes this large due to development are rare). 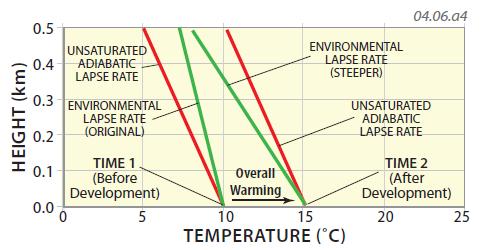 6. The most obvious change is a shift to the right of the starting points of the two lapse-rate lines for Time 2 (after development). This shift reflects an increase in the local average temperature. Another change is a steepening of the environmental lapse rate, because the surface warmed up a lot, but air farther up did not warm as much; thus, there is a larger change in temperature from the surface to that height (a steep rate). Finally, comparing the slopes of the lapse rates indicates that the atmosphere was stable (rising air was cooler than ambient air) before development but is unstable (rising air is warmer than ambient air) after development. This can change the amount of lifting (vertical motion), which may enhance the likelihood of precipitation if sufficient moisture is present.

How Do Water and Ice on the Surface Affect Stability?

Water has different thermal properties than land. Water has a higher specific heat capacity than air, meaning it can hold more heat. Water has more thermal inertia, which means that it reacts more slowly to changes in temperature imposed on it by the Sun, atmosphere, or land. In general, water surfaces stay cooler than inland areas in summer and remain warmer than inland areas in winter. Warm ocean currents and cold currents can influence the temperatures and stability profile of the overlying atmosphere. Ice and snow also affect surface temperatures, lapse rates, and atmospheric stability.

1. Warm ocean currents generally flow from lower latitudes into higher latitudes, bringing in water that is warmer than that outside the current. Consider what a warming of the ocean surface due to a warm current might do to conditions in the overlying atmosphere. 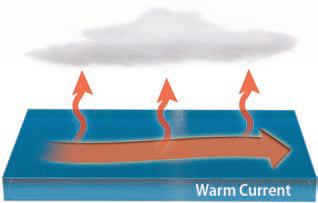 2. This figure  shows the environmental lapse rate and the unsaturated adiabatic lapse rate for the atmosphere over a warm ocean current. Near-surface air temperatures are relatively warm because they are heated by the underlying warm water. 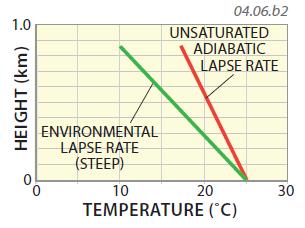 3. The warm water has less of an effect higher in the atmosphere, so the temperature difference between the near-surface air and higher air is relatively large. This results in a steep environmental lapse rate. The slope of the unsaturated adiabatic lapse rate is not influenced by the water temperature (it is always the same, everywhere). If the environmental lapse rate plots to the left of the unsaturated adiabatic lapse rate, adiabatically rising air will remain warmer than its surroundings and will continue to rise, causing an unstable atmosphere. The rising, moist air can form clouds or rain.

4. Cold ocean currents generally bring water from higher latitudes into warm environments in lower latitudes. We would predict that a cold current would cool the air near the surface, but what other effects will this have?

5. This figure shows the same types of lapse rates for the atmosphere over a cold ocean current. Near-surface air temperatures are relatively colder because of the underlying cold water, as reflected in a shift of both curves to the left on this plot compared to the plot for the warm current. 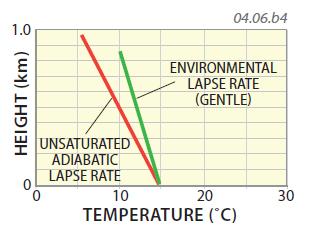 6. The cooling of near-surface air results in a relatively small difference between near-surface and higher air. The environmental lapse rate is therefore gentle (which plots as a steeper line on this type of graph). The relatively gentle environmental lapse rate is now to the right of the unsaturated adiabatic lapse rate, indicating that air rising adiabatically will become cooler (and more dense) than the surrounding air, so it will cease rising. As a consequence, the atmosphere over a cold current tends to be stable. This stability and the limited water-vapor capacity of cold air will tend to inhibit vertical motion, which will restrict vertical cloud development and precipitation.

Snow and Ice on the Surface

7. Snow and ice have a major impact on atmospheric temperatures, and not just because they are cold. Snow and ice both have very high albedo, as high as 90%, which is much higher than the albedo of rocks, plants, and other land cover. Also, snow and ice can appear rapidly, such as during a snowstorm, and can melt away nearly as fast. This appearing and disappearing can result in major changes in the thermal character of the surface over quite short timescales. 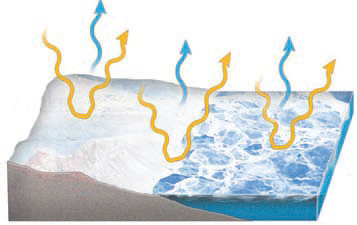 8. These two figures illustrate some differences between surfaces that are covered by snow and ice, versus those that are not. If snow and ice cover the ground and any frozen lakes, most of the insolation is reflected, keeping the surface cold. Cold air is dense, so the air over an ice or snow surface tends to sink. This increases the tendency for high pressure to exist over the ice-snow surface. The sinking air can trap cold air near the surface. Although the air near the surface is cooled by the ice and snow, the air above it may be warmer — a temperature inversion with its associated stability. Once the snow and ice melt, the albedo decreases, allowing insolation to warm the surface. The warmer surface warms the air, ending the inversion, changing the lapse rate, and making the air less stable. 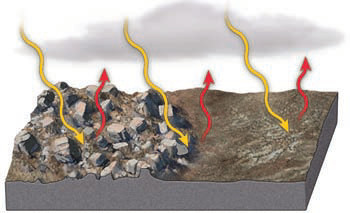