What Do Clouds Tell Us About Weather?

CLOUDS ARE ACCUMULATIONS of liquid water and ice suspended in the air. The types and amounts of clouds vary from place to place, from time to time, and from season to season. What are the different types of clouds, and how does each type form? Clouds provide clues not only about the amount and distribution of moisture at a given place and time, but also about conditions in the atmosphere, specifically the stability of the atmosphere and the type of convection that is occurring. This, in turn, informs us about important aspects of our weather.

We classify clouds based on three main factors: their form, their altitude, and whether they are associated with precipitation. Each of these aspects is summarized below, and examples of the main types of clouds are pictured in the large central figure.

The three main forms of clouds are cumuliform, stratiform, and cirriform. Cumuliform clouds generally are taller than they are wide, or at least have a lumpy appearance. “Cumulus” in Latin means “a heap”, and forms the root of words like accumulation. Stratiform clouds have the form of one or more layers (stratus means “to stretch” in Latin). Cirriform are feathery, wispy clouds, named after cirrus, the Latin word for a “lock of hair.”

We also subdivide clouds as to whether they are relatively low in the troposphere (low clouds), are near the top of the troposphere (high clouds), or are at an intermediate elevation (called mid-level clouds or designated with the prefix “alto”). For example, a mid-level cumuliform cloud is referred to as an altocumulus cloud. Some clouds extend from low levels up to high ones.

Clouds are composed of drops of liquid water, crystals of ice, or commonly some of each. Most drops and crystals are held aloft within the cloud because the buoyancy forces from unstable rising air exceed the gravitational force that pulls them toward Earth's surface. When the drops or crystals become too large to stay aloft, or the rising force weakens, the drops and crystals fall to the surface as rain, snow, hail, or some other type of precipitation. Clouds experiencing precipitation are designated with the prefix “nimbo” or the suffix “nimbus”. A stratiform cloud that is precipitating is a nimbostratus cloud, and a cumulus cloud that is precipitating is a cumulonimbus. Even with all the possible combinations of words for form, height, and precipitation, there are only about ten main types of clouds, which are illustrated here.

Cumulus clouds all have a somewhat puffy aspect but have different appearances, depending on their altitude and how unstable the air is (i.e., how strongly the air is rising). Cumulus clouds are produced by air rising under its own impetus, or free convection, and indicate that air is unstable to some degree. 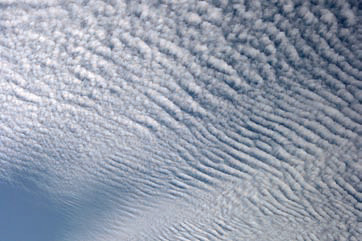 Mid-level clouds contain both liquid water and ice particles, with the level at which ice can be present being lower in winter. Cumuliform clouds at these levels are termed altocumulus. They are puffy and only somewhat wispy. 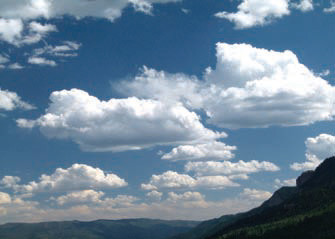 Typical clouds on many days are low-level clouds with a puffy (cumuliform) appearance, or cumulus clouds, which can be widespread across the sky or localized over mountain peaks. When the atmosphere is only slightly unstable and water vapor is not too abundant, cumulus clouds are not very tall. Such clouds are typical during morning hours before surface heating causes air to rise more rapidly, and at times when conditions are only slightly unstable. 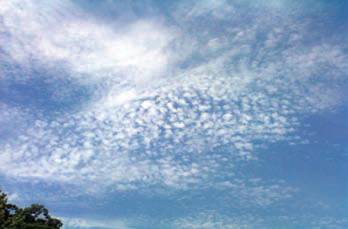 High in the atmosphere, clouds are composed almost entirely of ice. When such high-level clouds are partly cumuliform (lumpy) and partly cirriform (wispy), they are cirrocumulus clouds. 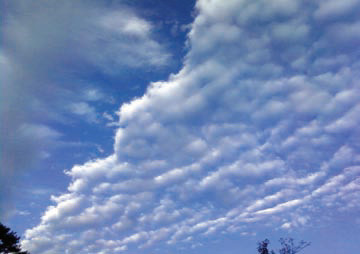 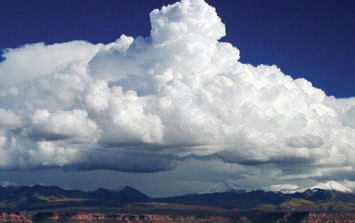 If moisture is abundant and the atmosphere is very unstable, strong lifting in the atmosphere can form cumulus clouds with great vertical extent. Tall cumulus clouds associated with precipitation are cumulonimbus clouds, and commonly are accompanied by lightning. A cumulonimbus cloud contains liquid water near its base but ice particles near its top, permitting hail to form. If well developed, such clouds develop an anvil shape at the top that points downwind, as the stronger upper-level winds push the moisture and storm cloud sideways. 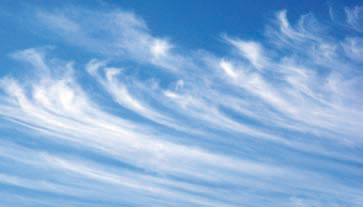 Cirrus clouds are high in the troposphere and have a distinctive wispy appearance, as if smeared on a photograph. At these levels, air temperatures are well below freezing, so these clouds are composed of ice crystals, which are easily blown and “smeared” about by the strong, upper-level winds. The ice refracts (bends) the light, enhancing the wispy, shimmery appearance of most cirrus clouds. Cirrus clouds often indicate that stormier weather is approaching, usually within several days.

A high-flying jet can leave a linear streak of clouds behind it, called a contrail (short for condensation trail). These form when water vapor produced by the engines encounters the much colder outside air, causing condensation of water drops or the formation of ice crystals. Once formed, contrails can be dispersed and sheared by the wind. They also contribute to the formation of cirrus clouds. 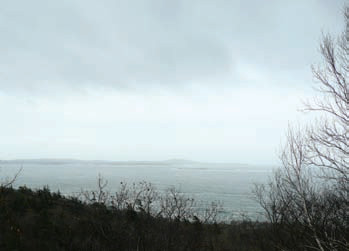 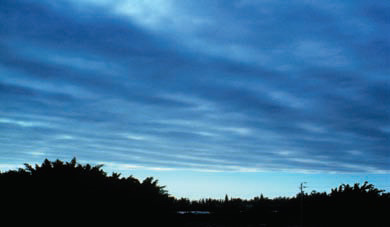 Stratiform clouds have a layered or spreadout aspect. They are the clouds we observe when skies are overcast, but they may obscure just a part of the sky. Such layers of clouds form when air is forced upward (forced convection), such as by surface convergence or movement of a frontal boundary. Stratiform clouds are oriented laterally rather than vertically, implying that vertical motion is resisted by the atmospheric conditions. 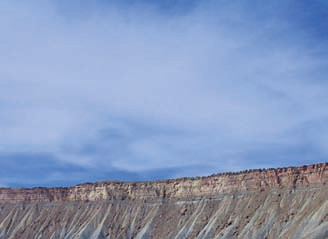 Stratiform clouds in the upper troposphere are high enough to be composed solely of ice and so have a somewhat wispy (cirriform), sheetlike appearance. Accordingly, they are called cirrostratus. 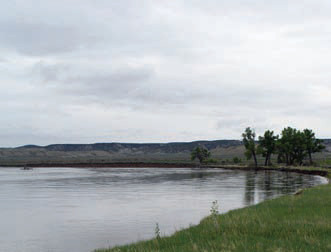 Mid-level stratiform clouds contain both ice and liquid water and can be expressed as high overcast. These mid-level clouds are termed altostratus. Stratus clouds can form at several levels.