FOG IS SIMPLY A CLOUD at ground level, so the same conditions that create a cloud also produce fog. Specifically, fog is produced by cooling of the air, by increasing the humidity of the air, or some combination, with the end result that water vapor content in the air reaches saturation. Fog forms in several distinct settings, each of which causes air at or near ground level to become saturated.

Fog is a ground-level cloud that obscures visibility, such as with this lighthouse. It is most common along coastlines, over large water bodies, and in certain low areas that have the right setting to produce fog, but fog can form nearly anywhere, under the right conditions. 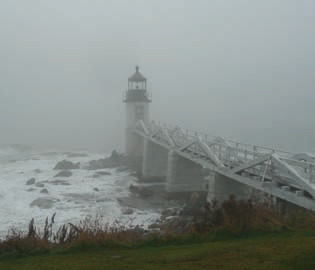 Fog indicates that the relative humidity has reached 100% and the air temperature has reached the dew-point (or frost-point) temperature, causing saturation. One way in which air can reach saturation is by increasing the moisture content until vapor pressure reaches the watervapor capacity, moving up on this graph.

Another way to reach saturation is by cooling the air until it reaches the dew-point (or frost-point) temperature, represented on this graph as moving to the left.

A combination of cooling and increasing humidity can also cause saturation. 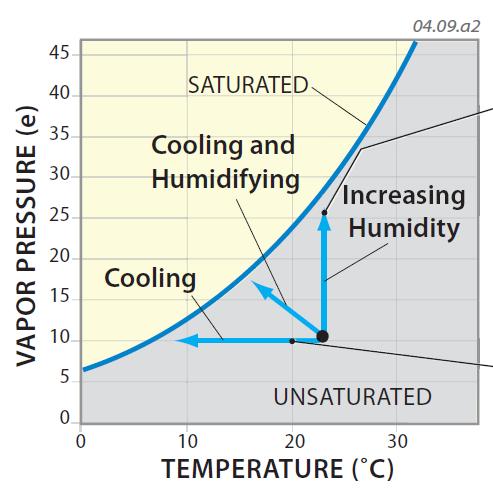 What Conditions Can Add Enough Humidity to the Air to Form Fog?

Fog can form where enough moisture is added to the air to cause saturation (100% relative humidity), but more commonly fog forms where the addition of moisture occurs simultaneously with the chilling of the air. Addition of moisture to the ambient air may happen when a nearby source of water for evaporation exists, or when precipitation evaporates as it falls through drier air.

1. When a warm water body underlies colder air, the environmental lapse rate is steep and the atmosphere is unstable. As the unstable air rises, it can incorporate water molecules that evaporate from the water body, increasing the humidity of the air. The increase in humidity and cooling causes the rising air to reach saturation, forming a type of fog called an evaporation fog. The instability causes an evaporation fog to rise in vertical columns, as shown in the photograph to the left. This phenomenon is common in fall, when water bodies are likely to remain warm from the long summer, but air above them begins to cool. 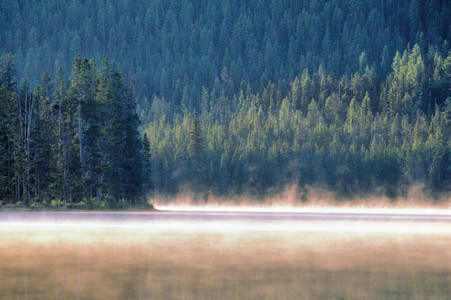 2. In rugged terrain, cold nocturnal (nighttime) downslope winds can trap atmospheric moisture in valleys. If moisture is added to the valley air, such as from wetlands, irrigated fields, canals, and lakes, the humidified and cooled air can reach the dew point, forming a valley fog. Perhaps the most famous valley fog in the U.S. is the Tule fog of the Central Valley of California, the white area in the center of this regional satellite image. 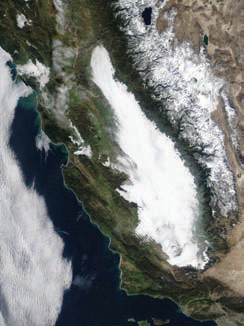 3. Fog can also form in association with precipitation, such as occurs along a warm front. A warm front is a mass of warm air that moves laterally, trying to displace cold air in its path. Along a warm front, warmer, less dense air is forced to rise at a gentle angle over more dense, colder air.

4. As the moist, warm air rises over the cold air, it is cooled and can reach saturation, forming clouds and rain. The released rain then begins to fall through the underlying cold air and toward the cold surface.

5. If the underlying colder air is dry, it can cause some or all of the falling raindrops to evaporate, increasing the humidity of the cold air. Since cold air has a lower water-vapor capacity than warm air, the increase in humidity can cause the cold air to reach its dew point, forming fog and other low-level clouds. Rain that reaches the ground can also evaporate, increasing the humidity of the near-surface air, potentially forming more fog. In both cases, evaporation of precipitation is causing the precipitation fog.

In What Settings Does Enough Near-Surface Cooling Occur to Form Fog?

Fog can also form where moist air is cooled enough to reach its dew-point temperature. This can occur where moist air moves over a colder part of Earth's surface, such as over snow or over a cold ocean current. It also occurs when moist air cools if it moves vertically. Several types of fog form primarily from cooling of moist air.

Although the term “radiation fog” sounds like something in the latest zombie movie, it is actually related to cooling of the ground surface by radiant heat loss. If skies at night are clear (i.e., cloud cover is sparse), and winds are light or calm, then the longwave radiation loss from the surface to the atmosphere will be relatively efficient, causing the surface to cool significantly.

Under these conditions, especially if near-surface air is humid, the surface temperature can drop to the dew point (or frost point) and cool the immediately overlying air, causing it to become saturated in water vapor. The condensation of water forms fog, in this case called a radiation fog. If the surface cools substantially, a temperature inversion will occur (colder air below warmer air), stabilizing the atmosphere and keeping the fog in place. Sometimes such fog can become concentrated in valleys and other topographically low places, therefore representing another way to form a valley fog (described below).

When warm air flows over a colder surface, the air loses some of its energy to the surface and therefore cools. If it cools to the dew point or frost point, the moisture in the air will condense and produce fog, as occurred when moist air moved over this glacier. The movement of air laterally is called advection, so a fog produced in this manner is an advection fog. 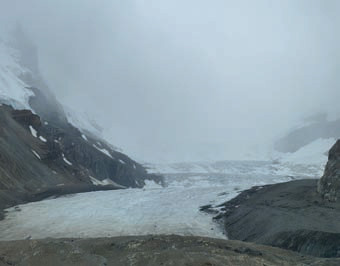 A similar process produces fog along many coastlines. If moist air over an ocean or large lake blows onshore, it can encounter ground that is colder than the body of water. 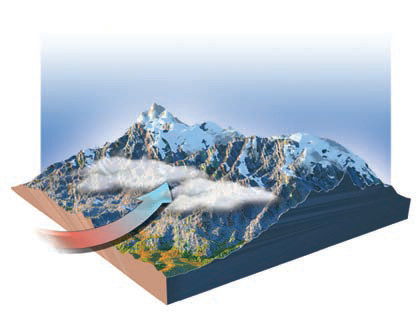 the prevailing local wind, it will cool because of the decreasing atmospheric pressure above it. At some level above the surface, the air may cool to the dew-point (or frost-point) temperature, and a cloud will form. But on the mountain slope, the cloud forms on the ground, so it is a fog. This type of fog is commonly called an upslope fog to indicate that the fog is caused by the upslope motion of air. 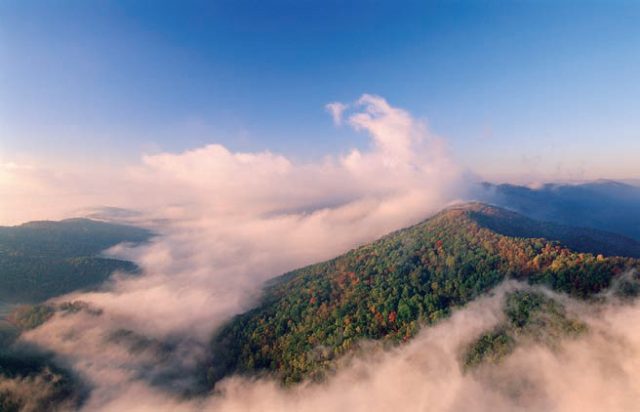 Valley fog can form in yet one more way. In mountainous terrain, air near the surface cools at night because of longwave radiative loss. This air will flow downhill because it is more dense than warmer air. It may remain colder than the surrounding air, even as it warms adiabatically on descent. If so, the descending air may chill the ambient air in the valley. If the ambient air is cooled to the dew-point or frost-point temperature, it will become saturated and form a valley fog. 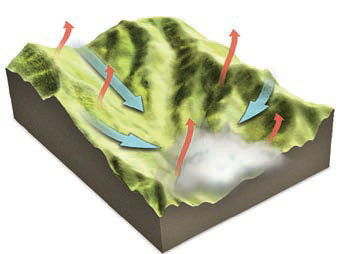