Climates Around the World

CLIMATE IS THE LONG-TERM PATTERN of weather at a place, including not just the average condition but also the variability and extremes of weather. It largely reflects an area's geographic setting, especially latitude, elevation, and position relative to the ocean. Climate is also influenced by atmospheric pressure and moisture, prevailing and seasonal wind directions, and the type of nearby ocean currents — in other words, everything we have explored so far in this book. Observed in this context, climate is the culmination of the various factors that move energy, air, and water (in all three states) in the Earth's climate system.

The climate of a region can be described, measured, and represented in many ways, including maps of annual average temperature and precipitation, like the two globes below (temperature is on the left). To examine long-term climate, as opposed to short-term weather, we consider data averaged over years or decades. Weather is what we get; climate is what we expect. Remember that climate includes not only average values but also extremes and variability about the averages.

What is the difference between weather and climate, and how are the two related?

Maps of climatic factors, like the ones below, visually represent large amounts of data for the land, sea, or atmosphere. For numerous measures, like temperature and precipitation, maps can depict annual averages, values for a particular month (perhaps the warmest month) as averaged over decades, or some measures of seasonal extremes or variability from one decade to another.

How can averages, seasonality, and variability in temperature and precipitation be combined to represent the climate of a region? 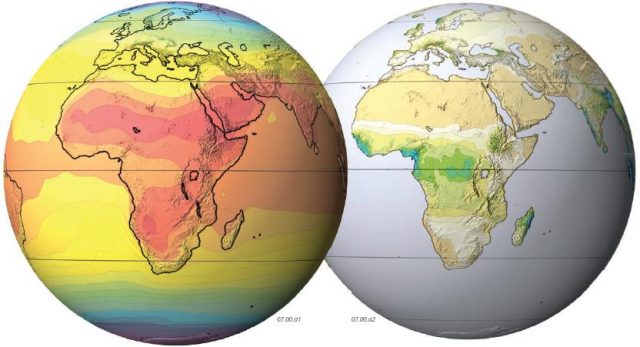 Average annual temperatures vary greatly across the planet. In the map above, high average temperatures are in red and orange, whereas cooler ones are in green and blue. What patterns do you observe? Much of Africa, but especially the central and northern parts, are very warm, much warmer than Europe. As anyone who has traveled to these places knows, they have very different climates. Africa straddles the equator, so some parts of it are likely to be tropical, whereas Europe is situated well north of the equator.

Do all areas with the same average temperature have the same climate? Are warm temperatures, by themselves, enough to define an area as tropical?

The average amount of precipitation is another factor most people consider when talking about the climate of an area. We might say that Scotland, the northern part of Great Britain, is a “cold, rainy place,” but the Sahara of northern Africa is an “extremely hot and dry place.” With such statements, we are expressing something about the average temperature or amount of precipitation but not what occurs on any given day (which is weather). Also, many regions have distinct wet and dry seasons, an important aspect of climate.

Can we combine measures of temperature and precipitation, and their seasonal variabilities, to represent the climate of an area?

By considering temperature and precipitation, both in terms of their averages and in terms of average maxima, average minima, and seasonal variations, geographers developed several climate classification systems, including the one portrayed on this globe. The colors and letters indicate what type of climate characterizes an area. Examine the color patterns and letters on this globe and compare these to the globes showing average annual temperature and precipitation. What correlations do you note?

How do we classify climates, and what do the letters assigned to a region indicate about its climate? 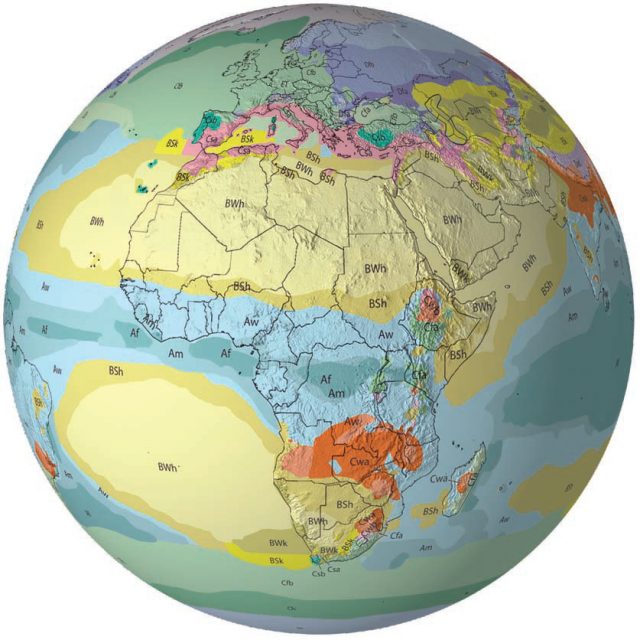 The climate of a region is influenced by many factors discussed in this book, including latitude and its relationship to Sun angle, elevation, topography, the locations of semipermanent pressure features, prevailing wind directions, common storm tracks, sea-surface temperatures, ocean currents, humidity, atmospheric oscillations, and teleconnections. These and other factors act in concert to produce the characteristic climates around the world, such as these in Africa and Europe.

How do Sun angle, topography, pressure features, humidity, storm tracks, ocean currents, and other factors interact to produce the observed variations in climate?

Oceans have characteristic climates, just like land areas. Note on this map that the climate of a land area generally continues out across an adjacent body of water, whether it is the Atlantic and Indian oceans or the Mediterranean Sea. Evaporation of water in the oceans provides energy for weather systems and other dynamic processes (like flooding), so assessing the climate of the oceans is important in understanding Earth.

On land, we consider types of plants in an area when talking about its climate, but how do we assign a climate zone to part of an ocean?

Climate is not static. Variations happen from year to year, and longerterm changes also occur. Witness the rise of global temperatures in the last 150 years, since the end of a very cold period in the 1800s. Human activities introduce materials, such as pollution and CO2, into the atmosphere, oceans, and land. Urbanization, as natural lands or less densely populated areas are converted into cities and towns, can affect the long-term averages of temperature, precipitation, cloud cover, and local winds — that is, urbanization changes the climate.

To what extent are the observed increases in global temperatures during the past century and a half attributable to human activities?